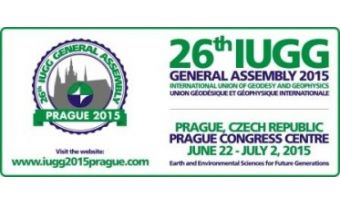 The IUGG General Assembly is held every four years, bringing together the eight associations of the International Union of Geodesy and Geophysics (IUGG) for a range of inter-disciplinary, cross-disciplinary and association-specific symposia. The next IUGG General Assembly, which will be held in Prague, Czech Republic, from 22 June to 2 July 2015, is based around the theme ‘Earth and Environmental Sciences for Future Generations’.

The joint symposia supported by IAG are:

The list above underlines that modern geodesy is very much an Earth observation science, contributing to our understanding of the dynamic Earth. However geodesy is also the foundation for national mapping, land and environmental management, and supports the geospatial industries. In addition to the above multi-disciplinary symposium topics, IAG will also organise a series of symposia that reflect current geodetic technology and applications topics:

The 26th IUGG General Assembly 2015 will be held in Prague, the capital city of the Czech Republic. Prague has played an important part in the history of both the nation and of Europe, and it ranks among the most impressive historical cities in the world. It features a unique collection of historical monuments, including Prague Castle. Since 1992, the historical core of the city has been listed in the UNESCO World Cultural and Natural Heritage Register as an area with a unique and lively blend of Roman, Gothic, Renaissance, Baroque, Art Nouveau and Cubist architecture. The Venue for the 26th IUGG General Assembly 2015 is the Prague Congress Centre, a purpose-built venue with easy accessibility to many hotels in the near vicinity. With the underground station located a mere 2-minute walk from the venue, the very heart of the city can be reached within minutes.

The Call for Abstracts has been released, and the deadline for abstract submissions is 31 January 2015. For full details on abstracts, symposia, registration and other conference information, please consult the IUGG2015 website. Looking forward to seeing you in Prague!

Prague will host the 26th General Assembly of the IUGG, the umbrella organisation of eight semi-autonomous associations covering various physical, chemical, mathematical, and environmental disciplines. IAG is one of the eight IUGG associations.