The 32nd International Symposium on Remote Sensing of Environment will be held from 25th to 29th June 2007 in San Jose, Costa Rica. The Call-for-Papers and other information are posted on the ISRSE 2007 website at www.cenat.ac.cr/simposio/index.htm. The deadline for abstract submission is 15th November 2006.

ISPRS 2008 Beijing
The XXI Congress of the International Society for Photogrammetry and Remote Sensing (ISPRS) will be held from 3rd to 11th July 2008 in Beijing, China. The theme of the ISPRS 2008 Beijing will be ‘Silk Road for Information from Imagery’. The ancient Silk Road was a well-known trade route between China and the west. It also contributed greatly to information exchange and spread of scientific knowledge around the world. Now we are in the age of information. The challenge is how should useful information be provided and shared? ISPRS has always been devoted to the development of international co-operation for the advancement of photogrammetry, remote sensing  and their applications. Through these efforts we will create a new ‘Silk Road’ for information from imagery. The new way will connect users, scientists, researchers and decision-makers etc. all of whom need and produce information from imagery. Together we will build the road and share it with the world. The ISPRS 2008 Beijing will be a milestone in the development of a ‘Silk Road for Information from Imagery’.


The congress will comprise keynote speeches and plenary sessions featuring distinguished scholars. There will be parallel oral and poster sessions presenting the latest developments in a broad range of topics, a user forum showing successful solutions and new requirements from the user community, and a commercial exhibition demonstrating equipment, devices, software and high-resolution imagery. The General Assembly will elect new council members, new technical commission presidents, and determine the host country for the next congress. Technical visits, social programme, sightseeing, and pre and post-congress tours will be organised. For more information please visit the congress website at www.isprs2008-beijing.org.

1916-2006
Georges Masson d’Autume was an honorary member of ISPRS since 1976 and president of Commission III for the period 1960-1964. Born in France in 1916, he graduated from the Ecole Polytechnique and began his career in the French Army. After participating in the French Campaign, he in 1945 joined the French corps of Geographic Engineers. In 1946 he was appointed to IGN, where he held various important positions and responsibilities, most often connected with research. In 1982 he received the prestigious Laussedat Prize, awarded by the French Academy of Sciences for his major contribution to photogrammetry. Also of significance was his research into the application of spline functions to photogrammetry. He developed accurate geometric models for image calibration, but also new DEM generation techniques based on automatic image matching along quasi-epipolar lines. These were soon after applied for the processing of SPOT imagery. 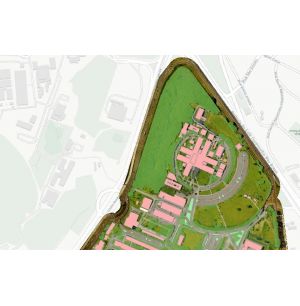 Mapping a University Campus in Brazil

Which Photogrammetry Solutions Are Surveyors Waiting For?
Latest article