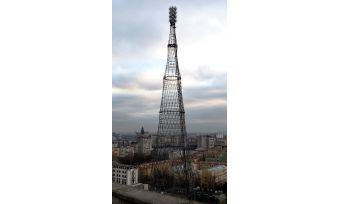 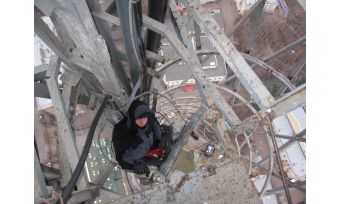 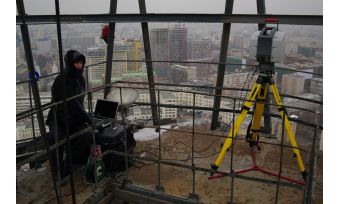 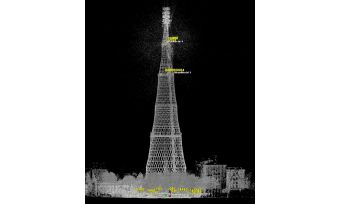 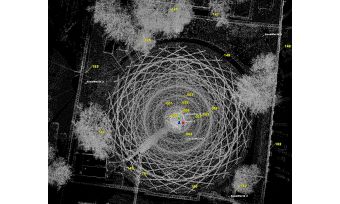 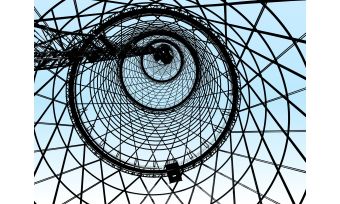 The 90-year-old Shukhov Tower in Moscow, Russia, is not only in a state of severe disrepair but the 150m-high steel construction is also under-documented. To support restoration initiatives or, in case of unexpected collapse, to enable the tower to be observed virtually, the authors carried out ground-based laser scanning using seven scan positions to create a detailed 3D model.

The tower, located a few kilometres south of the Kremlin, consists of six hyperboloids on top of each other, crowned with a set of antennas. Each of the six hyperbole sections is constructed of steel rods riveted together with horizontal rigidity hoops, which form a hyperboloid of rotation (Figure 1). The upper and lower hoops or rings form the foundation of each hyperbole. The lower four sections have 48 rods each and the upper two sections consist of 24 rods. Together they form the load-bearing structure for the antennas on top. The tower is not open to the public. During its 90 years of existence several modifications have been made, including construction of service platforms at the top (1937 and 1947) and installation of reinforcement rings (1973), addition of elements to bear VHF-FM antennas (1991) and an elevator. Although the original design has been pretty well preserved, the same cannot be said for the construction materials; the steel corrosion reached an alarming level in 1991. The national government allocated funds in 2011, and several projects have been initiated and prepared but none have been unanimously approved by experts. One of projects is aimed at restoring the tower to its original 1922 state, which actually means completely rebuilding it.

As the tower in its current state is close to collapse yet plans for major restoration are so far still only at discussion stage, the S. I. Vavilov Institute for the History of Science and Technology of the Russian Academy of Sciences (IHST RAS) decided to create a highly detailed digital 3D model of the tower, accessible for a wide audience including restoration planners and engineers, (foreign) researchers as well as the general public. IHST RAS initiated and organised the project, provided funding and archived documentation, defined technical specifications and developed software. Trimetari LLC performed the field survey and subsequent 3D modelling. The tower’s 90th anniversary in 2012 and the 160th anniversary of V.G. Shukhov in 2013 were further incentives for this initiative.

The majority of the original design documents have been lost, and those that have survived show significant differences with the ‘as-built’ construction. In 1947 the tower was measured in detail and mapped. Until recently those drawings formed the basic information for maintenance work, adding constructions and performing other modifications. However, the drawings themselves have never been updated and thus fail to represent the current status. To obtain an up-to-date model it was decided to perform terrestrial laser scanning. The scanning was done in December 2011 resulting in a point cloud from which a 3D model could be generated using the existing drawings as additional information. Use was made of Leica ScanStation2 and FARO Focus3D scanners. To capture the exterior of the tower all the way around three scan positions were arranged on the ground outside the tower at approximately equal distances along a circle at 5 to10m from the tower. To capture the lower sections from the inside an on-ground scan position was selected in the middle, and to capture the upper sections above-ground scans were taken on each of the three service platforms at 100m, 125m and 141m (Figure 2). Mounting the scanners on those platforms presented a real challenge as December in Moscow is cold and windy, and the heavily eroded state of the steel did not add to safety. Around 100 million points were captured with an accuracy of 7mm, of which 65 million points (Figure 3) with a grid spacing at centimetre level appeared to be feasible for generating the 3D model with an average accuracy of around 1cm. Using standard Leica HDS and B&W targets which were measured by a total station, the scans were connected to the ground control points at the base of the tower and thus georeferenced with respect to the Moscow geodetic control grid. The field works took three operators two days, i.e. six man days in total. However, the actual 3D modelling took many times that number (approximately 300 man days).

The 3D modelling of the complex construction was done in two stages. First, a 3D model was created from the points visible in the georeferenced point cloud. Hence, every rod and ring was extracted and placed in the model according to its accurate position and its real angle of torsion and individual deformation. Next, elements which did not appear in the scans due to small size, occlusion or low reflectivity were modelled using existing documents. This was a painstaking endeavour: thousands of rivets, gussets and fasteners had to be modelled and placed accurately in the model. Figure 4 shows the high level of detail of the model. In November 2013 the model was submitted to the Russian State Archive of Scientific and Technical Documentation as a first document of a new type: digital 3D model.

The field survey carried out by Trimetari LLC resulted in a 3D model which provides a detailed, complete, accurate and up-to-date representation of the tower. It is a valuable source of information for the engineers tasked with renovating or rebuilding the tower as it enables the elements – which have never before been archived – to be inspected and measured easily from the comfort of the office. It will also assist researchers specialised in technological monuments and heritage conservation. Moreover, a virtual stereoscopic tour has been developed; the general public can ‘climb’ the tower, observe its unique structure and gain a sense of its history and planned reconstruction. Today this is still a stand-alone service, but it will soon be accessible online via the internet.