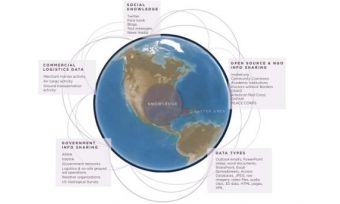 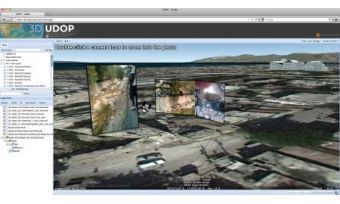 Haiti's 2010 earthquake relief efforts were chaotic. Efficiency and situational awareness proved restricted by the lack of an environment in which to share information. The User-Defined Operational Picture (UDOP) enabled the international relief community in Haiti to share data on an intuitive common platform. As a result, a massive collection of volunteered information was available to relief workers, increasing the efficiency of their efforts.

Prior to the Haiti disaster, humanitarian operations were already an important focus for SOUTHCOM. The grave scope of this disaster made enabling collaboration among international organisations a top priority. Many participating organisations possessed pertinent data and their own management practices, but there did not exist any comprehensive understanding of other organisations' activities and data. Information was fragmented and held separately and locally, restricting an overall and up-to-date understanding of the situation.


Rendering data in a geospatial environment helped overcome differences in nomenclature and language, diverse prior to the earthquake and an integral aspect of Haitian culture. Each location was often known by several names, but viewing data from numerous sources simultaneously in the UDOP allowed rapid identification of duplicate names.

UDOP
It was realised that a platform already familiar to time-constrained users would reduce training time and accelerate user adoption, so the Google Earth Enterprise (GEE) platform was chosen for its positive reputation among consumers and its ability to streamline vast amounts of imagery, terrain, and vector data. Also, being entirely browser-based, GEE is readily and easily accessed by a wide user base.
iSpatial was chosen for the core of the UDOP development process because it allows user interfaces to be rapidly built. It is a rich platform, comprised of both front-end libraries which augment and extend the Google Earth API, and back-end services providing analytics and access to data. Because iSpatial specific functional requirements were reached through valuable pre-built components and customisation, software development time was reduced by an order of magnitude, delivering the web-based UDOP in days rather than months.

Evolution
The UDOP could import KML/KMZ files in a variety of different display formats, including 3D structures using Google Sketch-Up. It could also export content and link to a URL to receive data updates dynamically, ensuring that the UDOP served as both repository and index of available content. Connecting to dynamic layers in the open web proved more scalable than constantly updating of data by analysts. Content residing at its origin was exposed by its custodians without altering their practices. To this end, the UDOP leveraged a non-GIS collaboration portal that posted image, document and comment sharing from SOUTHCOM's international Humanitarian Assistance/Disaster Relief network. As the demand for personalisation increased, the ability to authorise content with a labelling and icon scheme was created. The validity of data and sources was managed by analysts whose hierarchical approval process determined which content could be publicly viewed.


The average time a user spent interacting with the data rose to over two hours per session: evidence that demand for a spatial collaborative environment had been previously underutilised. There were over 2,000 confirmed relief works using the UDOP with the capability to create content within one week of the earthquake, and thousands of others using it for general awareness in relation to the relief effort.

Collaboration
The SOUTHCOM UDOP architecture was designed to spatially enable ad hoc communities expected to mobilise piecemeal to international emergencies. While data inputs from government and commercial sources could reasonably be expected to be organised and to adhere to standards, non-profit organisations were often not well positioned to leverage information systems. The large presence of such in Haiti made this a significant factor. Thermopylae took an inclusive approach, inviting the entire relief community in Haiti to collaborate in one place on all their collected data.


The Presentation Builder briefing tool within UDOP had advantages over standard briefing tools in that users could show views without having to create briefs from scratch, so losing precious time and continuity. All data could be viewed through sequences of view captures that were easily rearranged, updated, or interacted with on the fly. Presentations are updated automatically as the UDOP content is updated at source.


One organisational challenge in disaster relief practices is posed by typically fast paced and often autonomous NGO operations. Lacking insight into peer activities leads to duplication of efforts and other inefficiencies which may degrade the effectiveness of relief operations. Software features were built into UDOP to guide users towards common awareness. iHarvest is a Thermopylae-developed social networking service that immerses each user in UDOP content and its user community by modelling layers and areas searched. Each user was prompted as time went on with new and existing content similar to previous searches, and users with similar profiles were informed of each another's presence. Disparate groups were no longer operating in a vacuum, unable to access one another's situational intelligence.

Managing Content
Enabling operation by disparate relief entities was central to accommodating as much of the relief community as possible, but it also presented challenges. All content automatically recorded some embedded archival data to provide lineage and pedigree data for future viewers, but along with growth of content and user came a desire for customised data labelling and organisation. Thermopylae built a multiple tag function so that each piece of data could have several defining terms. The ‘Views' feature was activated so that users could customise folder arrangement to ease access to the most relevant content. To make the UDOP friendly to the international community its tags referenced Spatial Data Infrastructure (SDI) Cookbook documentation and subject matter expertise from the Global Spatial Data Infrastructure Association (GSDI).

Concluding Remarks
Concerned that existing solutions were restricting, SOUTHCOM engaged Thermopylae to rapidly build a user-friendly GIS tool to reach a wide user base, fuse data, and immerse users in relevant content. The resulting SOUTHCOM 3D UDOP united over 2,000 relief workers and thousands of others. The UDOP met a variety of needs for relief workers in Haiti and was used again in Chile, Guatemala, and the Gulf of Mexico oil spill. As the technical capabilities for sharing data increase over time, new ideas will come from users as they reset their understanding of the high-water mark for inclusive sharing of spatial data. Relief workers will increasingly demand the ability to manipulate data themselves and demand GIS on the most accessible software. SOUTCHCOM, in cooperation with Thermopylae and other organisations, is now working on an enhanced set of capabilities that can be used within the international community to address future disasters.