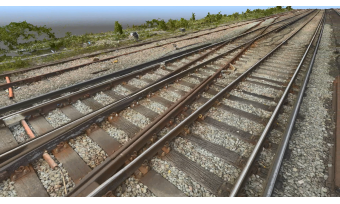 One of the major challenges facing railway networks is preventing failures in railway tracks. Avoiding potential track malfunctions means inspecting thousands of miles of track, while avoiding risk to inspectors and traffic interference. One innovative inspection methodology is to build a ‘digital railway’ – an accurate and dynamic visualisation tool to identify actual and potential track damage. Relying on the highest-quality data acquisition, a digital railway helps those responsible to make better informed decisions while planning and prioritising rail development, maintenance, repairs and renewal projects. This article outlines the use of such a tool in a UK railway project.

In collaboration with the UK’s Network Rail, Plowman Craven recently developed Vogel R3D. This service, based on an unmanned aerial vehicle (UAV or ‘drone’), facilitates the 3D measurement of rail infrastructure to sub-5mm accuracy. The tool was developed to conduct a comprehensive survey of rail infrastructure, offering aerial access to difficult-to-reach areas and limiting risk to ground-based personnel. High-resolution images enable the survey to capture a larger surface area in a single flight. Once captured, overlapping images are processed in photogrammetry software to produce an accurate 3D point cloud. The software’s pixel matching algorithms are used to solve the interior orientation parameters and aerial triangulation.

The Vogel R3D system comprises an Aerialtronics drone, known for its safety and reliability, integrated with a Phase One Industrial 100 megapixel medium-format aerial camera. The lightest weight in its category, this camera’s sensor is able to capture greater amounts of light for optimal data quality and has a high dynamic range to enable accurate measurement of both high and low-intensity objects within the same image.

One of the main attributes of the system contributing to the safety case is the aircraft’s rotor setup. A total of eight rotors provide sufficient redundancy if one were to fail, whereas a motor failure on an aircraft with just four rotors would almost certainly lead to that aircraft crashing onto the tracks. It is therefore clear why redundancy and reliability are critical to safety in this kind of operating environment. The safety features, hardware redundancy and track record of the Aerialtronics platform have enabled Plowman Craven to obtain an ‘Operation Safety Case’ from the Civil Aviation Authority, permitting the flying of the UAV in congested urban areas. These enhanced flying permissions are granted only to a handful of operators.

The sheer number of moving and parked trains at some locations proves a constant challenge for the survey teams. A track can only be perfectly viewed when it is clear, meaning high levels of planning and preparation are required – particularly at busy stations where the track is unobstructed for only 60 seconds between train movements. Having the ability to manually pause surveying mid-flight until the train has passed is invaluable in this regard. In the system used, it is possible to set the photogrammetry overlap to ensure trains blocking tracks do not impact on the outputs.

Operating at a height of 35m, the Vogel R3D system follows a series of pre-programmed flight paths to capture thousands of overlapping high-resolution images. This ultra-high-resolution imagery is critical in the generation of high-accuracy survey-grade data and provides a complete visual record of the site as well as the measurement data.

The high quality of the 100MP raw photography captured enables the identification of even the smallest features. With ground sample distances of 1-2mm it is possible to identify markings on the sleepers and specific rail clips, as well as the location of flash butt welds. These are objects that are highly problematic for surveyors to visually locate when working on the tracks at night, equipped with just a head torch.

Typically, a single UAV flight lasts around 10 minutes before a battery change is required, and approximately 300 images are captured during this time. Each individual flight is preceded by many safety checks covering both the integrity of the UAV system and any hazards within the area of operation. In its first six months working on the UK’s railways, the Vogel system completed more than 50 flying hours across a range of projects, capturing more than 8TB of RAW photography.

Unlike with traditional methods of conducting railway surveys, topographical survey CAD data is complemented by ultra-high-resolution orthophotos and highly detailed coloured point clouds as well as the RAW photography. All this data can be provided in hard copy, as well as on Plowman Craven’s cloud-based data management platform to enable access for multiple stakeholders.

The ultimate value of this visualised data is highly significant. It enables stakeholders anywhere in the world to ‘walk’ through a specific site using a tablet or computer, allowing for imagery interrogation and measurement extraction. For train operators and maintenance companies with extremely limited information on the physical characteristics of their routes, being able to access such usable, verified survey data is hugely beneficial and supports decision-making when monitoring, planning, predicting and preparing future railway maintenance projects.

The advantages over traditional surveys are very clear. A successful survey was completed with the Vogel R3D at Guildford in Surrey, one of the busiest stretches on the network with more than 30 trains an hour passing through. Furthermore, with three branch lines converging at Guildford Station, gaining possession of all three at the same time would not have been possible, but Vogel eliminated the need for possessions and shaved several months and significant costs off the programme. The UAV was able to survey a 1,200m stretch of track, up to eight tracks wide, in just five days and with no track access required at all. Health and safety benefits aside, the client received the full topographical survey of all permanent-way (P-Way) detail, point cloud and orthophotos in a matter of weeks. Lineside and platform gauging was also conducted.