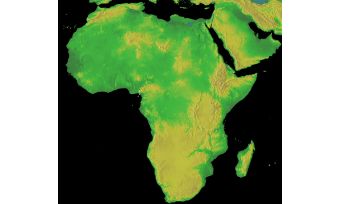 Generalising about Africa is dangerous. With 47 countries (or 53 if you use the UN list and include island nations such as Cape Verde, Madagascar and the Comoros), it is hugely diverse. The state of economic development, social welfare, environmental quality, population growth and political development varies greatly across the continent. Yet there are many problems which are common, even if the incidence is variable. Environmental sustainability is just one of them.

Properly applied, ubiquitous and common GI technology can vastly ease some of these problems. The colossal speed of adoption of mobile phones in India – rather than the creation of a landline infrastructure – is just one example of how disruptive technology can leap generations, rendering legacy technology obsolescent, and create new opportunities.

Geographic information science (GIScience) and geographic information systems (GIS) have already made a sizeable contribution to tackling environmental and other challenges in Africa. Perhaps the earliest example was the creation of a GIS facility in the UN Environment Program (UNEP) in the early 1980s in Nairobi, Kenya. In those days the biggest problems were continuity of electricity supply, existence of data and the presence of suitably skilled staff, plus low levels of acceptance of the potential value of GIS amongst decision-makers. Such problems are now less acute, even if resourcing remains a serious issue for many organisations.

Although the facility was primitive by current standards, the history of UNEP’s GIS still has contemporary lessons, however. UNEP was established during the first United Nations Conference on the Human Environment in Stockholm, Sweden, in 1972 and its headquarters opened in Kenya two years later. Written details of the creation of the GIS facility have since become lost but an important factor was certainly the contribution of Jack Dangermond, the founder of Esri. He gifted Esri’s then-software to the embryonic facility and persuaded the president of Prime Computers – then one of the two leading mini-computer manufacturers – to donate suitable hardware. Esri is now the globally dominant commercial organisation in the GIS and related fields and two particularly important characteristics of Dangermond’s approach have remained unchanged to this day. The first is the building of active partnerships with local communities: Esri has a very large number of government, not-for-profit and university bodies as partners comprising a vast ecosystem. The second characteristic is the fostering of education and GIS skills acquisition. Other vendors at the time typically took a short-term commercial view of access to their software by universities in particular. As a result, they lost out in the huge expansion of GIS student training and research applications which blossomed in universities across the world on the back of Esri software provided at low or no cost.

Thus UNEP and its GIS was part of the first GIS seeds sown in Africa. Later, UNEP GIS facilities were established in Norway, Poland and eventually everywhere. What happened in Nairobi was also an early demonstration of the benefits of long-term thinking on how to grow a business at the same time as supporting national and local communities in improving environmental sustainability.