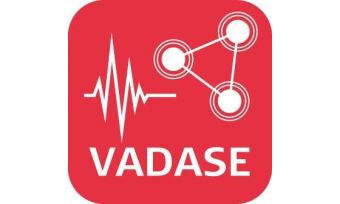 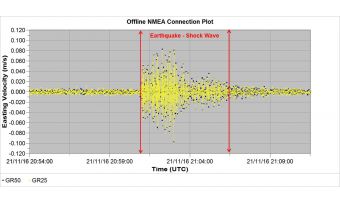 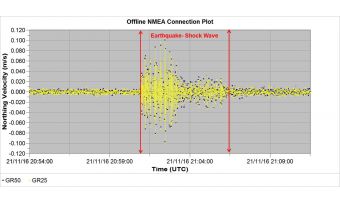 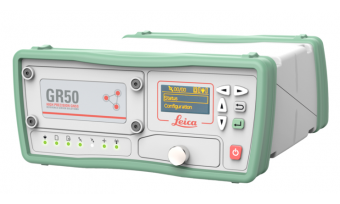 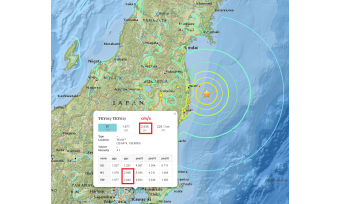 The use of a highly precise time-differenced phase observation enables the calculation of the velocity of a site location or GNSS antenna position respectively, which allows an accurate estimate of the movement. Time-differencing the phase observations is required to remove the unknown ambiguity parameter. This allows the processing of the observations without the need to do any phase ambiguity resolution and enables VADASE to produce a velocity estimate from any two epochs of phase observations. Error sources such as ionosphere, troposphere, linearisation errors and satellite orbit errors need to be compensated.

The ionosphere effects are mitigated by processing a linear combination – a common process to remove effects of ionosphere refraction, of GNSS signals – which mitigates the first-order ionosphere drift in the velocity solution, while a precise troposphere model is used to estimate and compensate for the troposphere drift. In the case of a single-frequency solution, a precise a priori ionosphere model is used to compensate for the ionosphere effects. The linearisation errors can also be minimised using two techniques:

As VADASE is realised onboard the receiver as a real-time solution, the satellite orbit velocities required for the calculations have to be directly derived from the broadcast satellite ephemeris. As the observations used are time-differenced phase observations, these are actually the position difference between subsequent epochs, which equates to the average velocity over the given time period. Furthermore, since the velocities derived from the broadcast ephemeris are the instantaneous velocities at the epoch time, it is necessary to compensate these values to obtain the computed average velocity over the entire epoch. Thus VADASE also calculates the satellite acceleration and jerk to a high degree of precision in order to compute the correct expected average velocity term.

Within VADASE a straightforward velocity noise threshold is applied to detect movements of the GNSS antenna and trigger the start and end of the displacement computation. Additionally, an effective outlier detection technique based on the velocity component ‘quality estimates derived from the variances’ detects and removes blunders from the raw velocity data. Depending on the desired application, different displacement computation strategies may be desired.

The algorithm has been integrated into the RefWorx firmware of all current GNSS reference stations (GR series) and monitoring receivers (GM series). With this integration, the technology is now available for a wide range of GNSS users and applications, such as wave-form analysis in seismology and tsunami early-warning systems, real-time structural and geotechnical engineering monitoring and safety monitoring of infrastructures close to potential environmental hazards. As soon as predefined limits are exceeded, the responsible teams instantly receive a warning to take necessary action.

Displacement events are recorded onboard a single stand-alone GNSS receiver, and the user can be instantly notified by email. Unlike traditional GNSS monitoring systems that require additional hardware or infrastructure for differential processing (i.e. one or more reference stations or global correction services for precise point positioning), this technology provides autonomous processing capability with no extra equipment or services such as RTK needed.

Earlier application studies, e.g. on the Tohoku-Oki earthquake from 11 March 2011, have demonstrated the effectiveness of VADASE. More recently, in the early hours of 22 November 2016, a 6.9-magnitude earthquake struck off the coast of Namie, located on Japan’s Honshu island. A tsunami warning was issued indicating waves of up to 3 metres. The Leica Geosystems team was able to analyse the data taken during the earthquake from two independent GNSS test systems co-located and connected to the same antenna installed on the Leica Geosystems office building in Tokyo. The station is more than 230km away from the epicentre of the earthquake which was reported at 20:59 UTC. Nevertheless, the analysis revealed that the antenna had reacted to the earthquake from around 21:00:50 UTC onwards and that VADASE, which was not specifically set up for seismic detection, had recognised some small impact. This demonstrates the effectiveness as well as the sensitivity of the solution for the detection of earthquake occurrences.

Earthquake early-warning systems can use VADASE technology to alert scientists when shock waves generated by an earthquake are expected to reach their site location. In addition, for applications needing instant information about the impact on nature and infrastructure following seismic and natural disasters, the method can provide information on co-seismic displacements and waveforms for analysis. VADASE can provide valuable data on displacements when monitoring structures such as buildings, bridges and skyscrapers.

When fast movements have to be detected and their effects suddenly evaluated, Leica VADASE can help researchers and engineers to make highly informed decisions immediately. The solution adds additional value to traditional GNSS monitoring, providing accurate velocity information based on a stand-alone GNSS receiver that is continually available in real time for precise and reliable analysis of fast movements.

Frank Pache received a graduate engineer degree in geodetics engineering from the University of Applied Sciences Bochum in 1991. He joined Leica Geosystems in 1992 as an application engineer for GNSS surveying systems. He currently holds a position as senior product manager for GNSS infrastructure solutions.