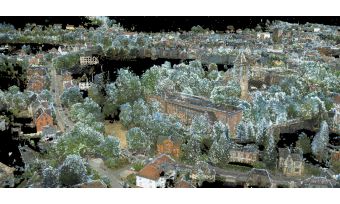 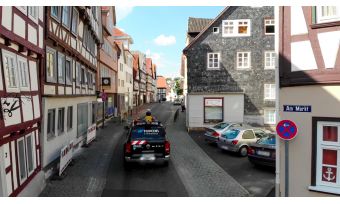 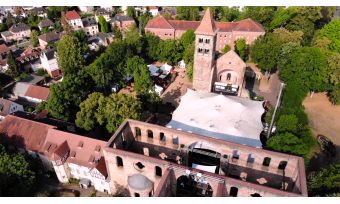 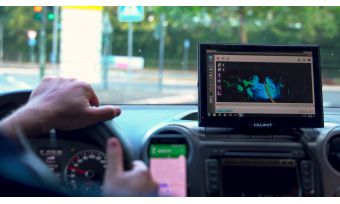 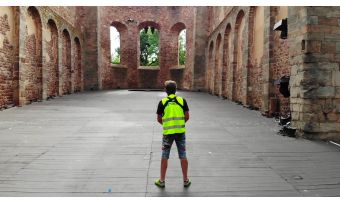 Several hundred thousand visitors are expected to descend on the town of Bad Hersfeld in eastern Hesse in just ten days for this year’s “Hessentag” festival – a Herculean feat of logistics and organization for the administration of a town with a population of 30,000. In order to cope with the influx of people, Bad Hersfeld has called upon the expertise of Topcon. With the aid of a mobile mapping system, an aerial drone and state-of-the-art software, Topcon’s infrastructure specialists produced a “digital twin” of Bad Hersfeld in just a few days. The town administration can now use this digital model to plan traffic flows, emergency access routes, and the entire event logistics of the festival period down to the smallest detail.

The town of Bad Hersfeld in eastern Hesse has plenty of experience of large-scale events. Since the 1950s, the town’s festivals have been attracting theatre-goers from across the world to this district town by the River Fulda. The last few years have seen over 100,000 visitors throng the town’s theatres during the festival weeks. But what is set to happen to the town’s 30,000 inhabitants over ten days this coming June will put all previous festival experience in the shade: Bad Hersfeld is hosting the Hessentag in 2019 and is expecting several hundred thousand visitors.

The Hessentag is Germany’s largest federal state festival. In order to avoid traffic chaos in Bad Hersfeld during the festival period, the town’s administration, with the support of Mayor Thomas Fehling, is calling upon some smart solutions. Topcon’s track record and offering were what convinced the mayor of Bad Hersfeld that they had found a suitable partner: “We held joint meetings in which we discussed how a small town like Bad Hersfeld could benefit from a digital twin. We soon realised that we spoke the same language and that it was possible to build a bridge between technology, industry, and administration,” recalls Fehling. The town’s “Smart City” project is one that is close to his heart, and it has a defined focus on the benefit to the local population: “Citizens’ quality of life will improve.”

The deployed infrastructure experts moved in on Bad Hersfeld armed with a mobile mapping system and an aerial drone. “We have created a digital twin of the town”, explains Heiko Lohre, project manager at Topcon with responsibility for this project. Together with his team, the project manager digitally captured the town center, logistical routes, feeder roads, and the available parking spaces. “Our city model reproduces all roads along which transport and supplies to Hessentag visitors will be organised,” continues Lohre. In the space of just six hours, the technologists and their Topcon devices collected all the necessary geodata of the 130 kilometre-long traffic route network within Bad Hersfeld and the surrounding area.

Data can be captured while the vehicle travels at speeds of up to 80 kilometres per hour. The system “flows along” inconspicuously with all the usual traffic. “When the vehicle comes to a halt at a traffic light, data capturing stops automatically,” preventing any unnecessary data from being captured, emphasizes Lohre in response to the question of applicable data protection laws.

Nevertheless, the infrastructure experts collect enormous quantities of data in a very short time. “Our mobile mapping system captures data volumes of 50 gigabytes per hour of travel,” remarks Lohre. On the back seat of the vehicle is a PC with four hard drives, which store the captured data during the journey. The measuring team need to drive along certain routes several times, as even a parked HGV may prevent the pavement behind it from being captured correctly. “So we simply drive past that point again as soon as the obstacle to capturing has gone,” adds Lohre.

When the mapping trips have been completed, Topcon’s experts use the raw data to generate the town’s digital twin. “The model’s accuracy is created in the office,” explains Lohre. Data from a total of five different sensors are blended into a uniform point cloud. As well as GNSS data, laser measurement points and other vehicle data, such as the tilting behaviour of the car the device is contained in, the Bad Hersfeld model also draws on photographic data that was also captured by the mapping system at the same time as the other data. In total, Topcon has collected 200 gigabytes of raw data from the prospective Hessentag location.

The final stage of producing the digital twin requires around four times as long as that of mobile mapping. “The key aid for doing this is our infrastructure and construction software Magnet Collage,” continues Lohre, the project manager. This single software solution allows point cloud data to be combined, visualized and analysed with a high processing speed, even if the data originate from different sources.

The Topcon team has given the town’s mayor a copy of the finished 3D model of Bad Hersfeld on a hard drive. “To do this, we use LAS and LAZ files, which are both common exchange formats for 3D point clouds,” explains Lohre. The further handling and planning-related use of the town’s digital twin is being managed by Bad Hersfeld itself. “But should any missing points be discovered in the model’s data set, we will return to Bad Hersfeld and use our capturing and measurement systems to correct the model,” he assures us. He notes another requirement that his team had to take into account in Bad Hersfeld. Mayor Fehling instructed the experts to ensure that the process used in Bad Hersfeld can be transferred to other municipalities and cities. “That posed no problem for us,” remarks Lohre. The working and capture processes can be repeated in other cities at any time, he says.

Of course, the forthcoming Hessentag is not the only thing the digital model of Bad Hersfeld will be used for. When the state government of Hesse heard about the measurement project, Topcon was assigned another task. While they were capturing the town centre and the relevant traffic route network, the measuring team also took measurements of the ruins of Bad Hersfeld Abbey using an aerial drone. The approximately 900-year-old ruins are the property of the State of Hesse, and not only are they the world’s largest Romanesque church ruins, but they also form the impressive backdrop to Bad Hersfeld’s annual festivals. The model data captured and processed by Topcon can be used straight away to produce accurate plans of the festival’s 1400-square-metre main stage, located within the abbey ruins, Lohre asserts.

Bad Hersfeld has already been using its digital twin in its initial steps towards a successful and well-organised Hessentag. The exact number of available parking spaces is now known, as well as the areas where festival stands can be erected in the town center without blocking emergency access routes or leaving them too narrow. The event logistics are also easier to organize thanks to the digital model. Mayor Thomas Fehling is pleased with the result: “The staff in our town administration can now determine from their offices how visitors will travel from A to B and how big the stage components are allowed to be, in order for them to be delivered to their respective event locations without any problems.

Topcon - Smart City from Topcon in Europe on Vimeo.

Topcon Top of the Pack for Finnish National Land Survey