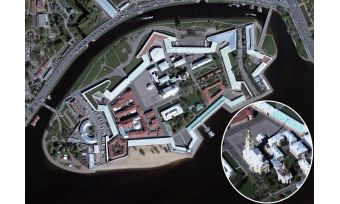 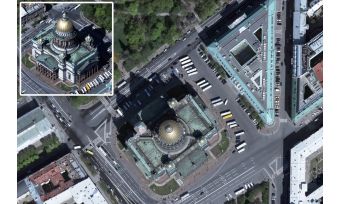 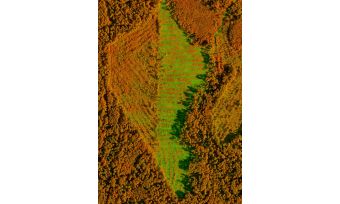 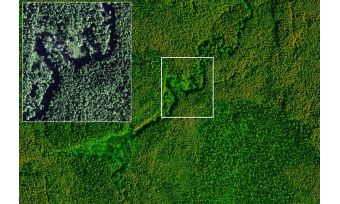 The A3 Edge digital mapping system is a sweeping camera system able to produce high-resolution and accurate imagery from high flight altitudes and hence to conduct surveys quickly and efficiently. The system is suited for capturing urban areas as well as sparsely populated landmasses. In 2014 it was used for two projects in Russia: 3D mapping of Saint Petersburg and mapping of boreal forests.

VisionMap’s A3 dual-camera system, introduced in 2008, obtains vertical and oblique views at the same time by sweeping two cameras across track simultaneously. The sweeping allows generation of a field of view (FOV) of over 100 degrees. The centre part of the total frame – up to an FOV of 40 degrees – is suited for orthoimage generation. The single frames captured outside this FOV range, i.e. the frames towards the end of the sweep, are de facto oblique images. Five years after the launch of the A3, VisionMap introduced the A3 Edge designed to increase the area captured per hour with a higher ground sample distance (GSD). For a further description of the A3 Edge and its comparison with other systems, see the article by M. Lemmens published in GIM International in 2014 [1]. Coupled with A3 LightSpeed software, the A3 Edge provides a complete end-to-end mapping solution. A3 LightSpeed automatically performs aerial triangulation (AT) and produces orthoimagery, stereo pairs and digital surface models (DSMs) from A3 images. As mapping companies take on ever-larger projects, the software has to deal increasingly with hundreds of thousands of images, which it does successfully. The complete A3 digital mapping system meets all industry standards.

All map products met the accuracy requirements of 1:2,000 mapping. AT and orthoimage creation were done automatically and took one operator 15 days. In comparison, Baltaeroservice captured the same area in 2011 using a medium-format camera and the images were processed with Talca 4.0 photogrammetric software. It took five operators six months to complete that job. Figure 1 shows two examples of vertical and oblique images captured during this project.

The Russian Forest Agency commissioned a project to cover large forest areas by aerial survey and to create colour (RGB) and colour infrared (CIR) orthoimagery. Russia is covered by 8 million square kilometres of forest, and its inventory – using satellite imagery – and its taxation by ground survey is done annually. The high GSD of the A3 Edge and its high RGB and NIR image quality enable the labour-intensive ground survey for taxation to be replaced by stereo-photogrammetric inventories. Images with a GSD of 14cm were captured covering an area of 33,490km2 within 48 hours. Table 1 shows the main survey parameters and Table 2 the main characteristics of survey, area and processing times. The orthoimagery, created using an existing DSM, was delivered in 4 bands (RGB and NIR) with a GSD of 30cm. The processing was completed within 52 days. The latest version of LightSpeed supports up to 250,000 images in a single block. With a forward/side overlap of 55%/60%, the images in the block may cover up to 55,000km2. Treating such extensive areas as a single block provides high homogeneous accuracy and eliminates manual processing of adjacent blocks. Other powerful features are automatic tie point creation, even where the forest is dense, and automatic creation of cut lines. Multiple overlaps between images as well as many tie points ensure that AT generates high-accuracy results. High visual quality of the end products is obtained through automatic adjustment of brightness, colour and contrast, and through haze removal. The end products delivered are RGB and CIR super large frames mainly used for stereo interpretation for taxation purposes and stereo mapping and RGB and CIR orthoimagery (Figures 2 & 3).

Table 2, Characteristics of survey, area and processing of forest areas.

Based in Saint Petersburg, Baltaeroservice has been active in the mapping market for 18 years, mainly in the northern part of Russia. The company specialises in aerial surveying and mapping of roads, railways and other linear structures and large forest areas. Baltaeroservice owns a Cessna P210 aircraft, has access to other aircraft and has used various aerial survey and mapping technologies over the years. The company is seeing a steady increase in demand for up-to-date map products, for high-resolution, vertical and oblique images of urban areas, and for regular mapping of extensive areas.

Dr Yuri Raizman holds an MSc and a PhD – both in photogrammetry – from institutes of Moscow, Russia, and has over 35 years of experience in the field. He has published 60 papers and prepared over 20 national technical instructions, standards and specifications. Before joining VisionMap as chief scientist in 2008, he worked as chief of photogrammetry and remote sensing and national GIS manager at Survey of Israel.

Alexander Magarshak, CTO of Baltaeroservice since 2009, graduated in applied geodesy from the Leningrad Mining Institute, Russia. He has worked in the field of geodetic support of exploration work in the Far East (Magadan region). As an engineer instructor, he has worked and trained professionals in Mongolia. He has been engaged in digital photogrammetry since 2005.