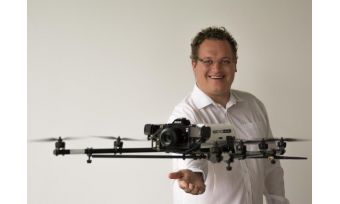 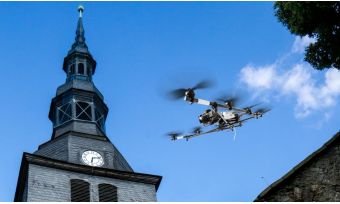 Although new UAV companies are taking off all the time, Ascending Technologies has been part of the geomatics world for several years and has already become a familiar face in the industry. In 2009 its renowned AscTec Falcon 8 went into serial production, setting a new standard for professional aerial imaging in the areas of aerial photography, industrial inspections and of course surveying. At GIM International we considered our 3rd UAS Special the ideal occasion to talk to Jan Stumpf, one of the founders of the German technology start-up.

Mr Stumpf, on your website your company is described as a leading developer of UASs for professional, civil and research use. Could you tell me about the history of Ascending Technologies?

With the innovation and development of one of the first quadcopters, we laid the foundations for the international multi-rotor hype in 2002. Since then we have been constantly improving and sustainably pushing the technology forward as pioneers of sensory data processing and flight attitude control. Ascending Technologies was founded by Michael Achtelik, Klaus-Michael Doth, Daniel Gurdan and me in 2007.

Today we are among the leading developers in the micro-UAS research sector. Many technical universities working on flying robots are using our research platforms. Moreover, we are leading in the industrial inspection field, which is surely the most demanding UAS market. For instance, there is Cyberhawk which provides drone-based industry inspection and surveying services and Sky-Futures which is specialised in oil and gas inspections – that, by the way, was the first company awarded Section 333 exemption permitting the drone oil and gas inspection in the USA. There is also Research Group, an international pilot training organisation. They all rely on the AscTec Falcon 8 in their daily business due to its unmatched flight performance.

How would you describe your connection with the geomatics industry?

With our new autopilot solution, the AscTec Trinity, we are closing the gap between fixed-wing and multi-rotor systems. It makes the AscTec Falcon 8 the safest and most efficient vertical take-off and landing (VTOL) aircraft. Research projects like the ZukunftBau have shown its advantages compared to conventional methods and even to other unmanned aircraft systems. Selected and certified retailers like Positions Partners, Santiago & Cintra, RedChina Geosystems and Drei Söhne Technologies all serve the international geomarkets.

Can you give us an insight into the latest developments in terms of the various geomatics applications for UASs?

We are convinced that our AscTec Trinity autopilot is the game changer, which the geoindustry and other sectors have been waiting for – and customers’ reactions attest to that. It is the first fully adaptive control unit with a triple-redundant IMU for multi-rotor flight systems. Thus the safety level is dramatically increased. It stabilises the AscTec Falcon 8 and, if it is possible to stay airborne, the AscTec Trinity will keep it in the air. The flight behaviour is perfectly predictable and will convince any professional user with its exceptional precision, robustness and area output. Above all, the AscTec Falcon 8 is now able to perform auto-shots while flying high-speed optimised trajectory flights. So you can survey extremely efficiently: 35 hectares within 12 minutes, for example.

Besides in geomatics, UASs are used in many other sectors too. Can you give us some examples?

Two of our customers have been awarded a major three-year contract which covers the drone-based inspection of the complete British railway infrastructure owned by Network Rail, including railways, overhead line equipment, buildings, viaducts, subways, bridges, tunnels, level crossings, land, embankments, dams and retaining walls. In numerical terms: think of 18 railways stations, with over 20,000 miles of track and 40,000 bridges and tunnels. It’s the first framework contract of that dimension in the transport sector and will entail thermal and visual inspection flights as well as surveying. Further notable projects involving the AscTec Falcon 8 include: parbuckling of the Costa Concordia by Cyberhawk, emergency bridge inspection and documentation from collapse to decommissioning by Orbiton, topography of two castles by Guido Morgenthal Technologien im Bauwesen (GMTIB) for Messbildstelle, which is the German organisation for photogrammetry and architectural survey.

Legislation and policymaking is lagging way behind the technology, which is hindering the wider implementation of UASs. Do you see any improvements regarding this situation?

Of course the heterogeneity of global regulations makes it hard for our international customers to use the AscTec Falcon 8 universally; homogenised regulations would make life easier for them. Proposed operating limitations in the new FAA framework of regulations are very similar to the German regulations, and that’s an important signal. We are committed to sustainable regulations. Ultimately, no industry and no country will be willing to abstain from the savings potential and opportunities of civil drone use. Just think of the end-user advancements thanks to safer assets and buildings, better infrastructure – plus more affordable due to reproducible automated UAS inspections – and maybe greater punctuality in rail travel.

In January 2015 your company signed an agreement with Intel to collaborate on developing collision avoidance technology and algorithms. What do you hope to achieve with this agreement?

Intel’s RealSense camera module, which weighs as little as 8 grams and is less than 4mm thick, brings depth perception to drones both indoors and outdoors with minimal impact on payload and flight times. Ascending Technologies’ expertise with autopilots, inertial sensors and data fusion algorithms combined with Intel’s RealSense camera module will bring a new level of intelligence and self-awareness to the drones. We will use the obstacle-avoidance technology developed jointly with Intel to add a new level of safety to our future products. The collaboration is a great opportunity for us to continue creating highly developed aircraft solutions.

Ascending Technologies is a manufacturer of UAVs, but what about the payload and the software?

We have developed a so-called inspection payload, a double camera combination, which enables synchronous production of RGB stills and georeferenced 14-bit RAW thermal images. Of course the cameras are of the most excellent brands, merely modified and optimised for that purpose. But just imagine: that payload reduces the customer’s inspection time exposure by half. We provide software solutions like our flight planning software AscTec Navigator and diverse pre-programmed automatic functions.

There has recently been some discussion of whether the geomatics sector needs a metric camera for UAVs. What is your opinion?

One of the most underestimated advantages of our AscTec Falcon 8 system is the payload-to-weight ratio and the small take-off weight of only 2.2kg. It’s incredibly easy to handle such a small platform compared to bigger systems, especially in everyday work. I am saying this because it means we would only use a metric camera system if it stays in a similar weight range as the current high-end, non-metric cameras (0.5–1kg).

The rise of UASs in the geomatics industry seems to be unstoppable. In view of the fact that UAVs were not originally developed for surveying and mapping applications, there must still be room for improvement. What is your view on this?

We have already optimised our UAVs for geomatic applications in recent years and can offer a fully featured package for drone professionals, but of course there is always room for improvement. A new function that is coming soon is Quick Survey. It will enable you to leave your laptop in the office; simply enter your required parameters (GSD, etc.) on the spot using our mobile ground station. The flight pattern and altitude are automatically optimised and defined by your settings. Position the AscTec Falcon 8 in one of the corners of the area, click on ‘Start’ and watch the automated waypoint flight.

How would you describe the UAV market, which is still seeing new companies emerging all the time? What do you foresee in the long term?

I think Ascending Technologies leads the research sector and is involved in numerous promising research and development projects. Don’t forget that the UAV market still has uge potential: from precision farming to industrial production support, and from intelligent drone swarms to flying information networks in crisis regions. Not every service provider and developer will survive the high speed of development. Consolidation, smart positioning and ensuring product quality prior to announcements will be the keys to success.

Intergeo, the world’s largest geomatics event, has a strong focus on modernising infrastructure. Which role do you see for UASs in tackling this challenge?

Previous Intergeo exhibitions have been very successful for us due to a thoughtful concept, so of course we will be present in Stuttgart this September. Modernising infrastructure is indeed an area in which UAS technology can contribute so much. There is no better basis for sustainable infrastructure development than in-depth structural analysis. With the AscTec Falcon 8 including AscTec Trinity, users are able perform precisely reproducible trajectory flights for inspection and survey. Now imagine a combination with obstacle avoidance and automatic flights, even in GPS-denied environments. That’s our contribution to modernising infrastructure.

This interview was published in GIM International's UAS Special 2015. Early 2016, Intel signed a definitive agreement to acquire the German developer and manufacturer of UAVs, Ascending Technologies. For more information on this see here.

Jan Stumpf is CEO of Ascending Technologies. He studied electrical engineering at the Technical University of Munich, Germany. He did his master’s thesis at the Massachusetts Institute of Technology (MIT), USA, on the underwater drone, ‘AMOUR’. Prior to Ascending Technologies, he was leader of the SSETI Group (TU Munich) for ESA European Student Moon Orbiter and leader of the E-LAB TU Munich of the Students Council. Stumpf holds a pilot’s licence for EASA PPPL and is a consultant on UAV regulation and danger assessment (UAV DACH & EASA).

How Can We Attract Students to Geomatics?
Latest article