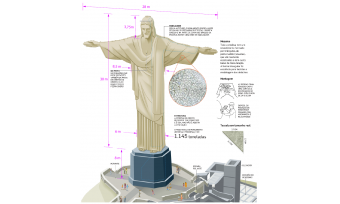 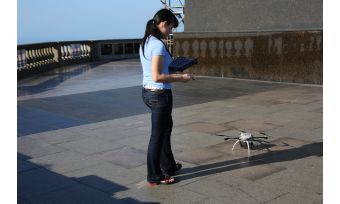 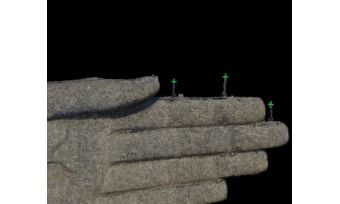 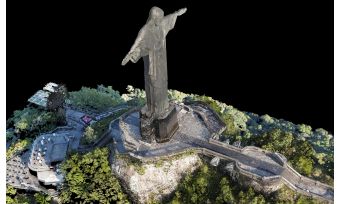 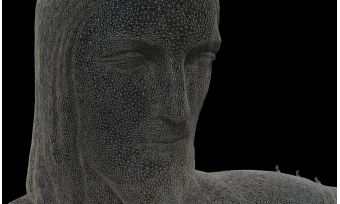 The famous statue of Christ the Redeemer in Rio de Janeiro has been reconstructed in 3D using a UAV. Challenging weather conditions and the sheer size of the monument meant that careful planning was required to complete the project and maintain safety. Thousands of pictures were captured around the statue and processed to create a large and accurate point cloud and a textured mesh.

Fascinating images of the statue of Christ the Redeemer in Rio de Janeiro, Brazil, were seen around the world during last year’s FIFA World Cup. The famous statue is not only an icon of the city, but is also a marvel of engineering. The monument has a total height of 38 metres and a 28-metre arm span (Figure 1). Built from reinforced concrete and covered with triangular soapstone tiles, it looks over the city from the top of the 700-metre-high Corcovado Mountain. The statue was designed by French sculptor Paul Landowski and built by the Brazilian engineer Heitor da Silva Costa between 1922 and 1931. There were no accurate 3D models of the statue up until now as its size, location and challenging weather conditions obstructed the use of existing technology such as Lidar. In October 2014, however, the statue was successfully captured using a UAV in the project called ‘Projeto Redentor’.

The UAV was to be deployed in challenging weather conditions on the top of the Corcovado Mountain. In October, the average wind speed is 30 km/h which is high, but still below the 50 km/h wind speed that the UAV can sustain. However, wind that hits the peak creates a higher pressure on the wind-facing side and lower pressure on the shadow side. This in turn can create a higher-velocity air stream with an upward direction on the front side and chaotic flow patterns that have a pull-down effect on the shadow side. Only an automatic pilot is capable of handling such conditions. With manual remote control, the pilot’s reaction time would be too slow to respond to changing wind speeds. Visibility was another issue to consider; in order to protect the safety of visitors to the statue, flights were only allowed outside of regular opening hours, but these times of the day are typically prone to heavy fog which may reduce visibility down to 5m.

Take-off and landing were restricted to a one-square-metre area at the foot of the statue (Figure 2), since other areas were obstructed by items such as cables. The large amount of iron in the support structure below the statue resulted in electromagnetic disturbances which confused the electronic compass in the UAV. This could be resolved by forcing a known initial orientation in the system before take-off. Another consideration was how the vehicle should handle a possible loss of communication between the vehicle and the control tablet. The UAV has several built‐in fail-safes for such situations: ‘Home and land‘, ‘Land in place‘ and ‘Home and hover‘. However, all options carried risk when the statue was located between the home position and the Aeryon Scout in flight or when the vehicle was hovering alongside the mountain. Landing outside the perimeter of the terrace would have resulted in an unrecoverable tumble down the side of the hill. To minimise these risks, the automated command ‘Home and land‘ was set for an altitude of 50 metres to avoid the tip of the statue. In addition, the low-battery margin was increased to 300 seconds which is twice the time needed to ascend and descend the 50-metre height.

The Aeryon Scout quad-rotor UAV was used as a platform. It was equipped with an integrated camera payload that acquired 16MP images. Basic camera controls like taking snapshots, changing zoom levels and recording video were supported by software on a tablet computer. Each individual flight lasted 10 minutes, after which the batteries had to be replaced and the data downloaded from the UAV. Flights were only performed in the morning before visitor opening hours and if weather conditions permitted. A total of 19 flights were performed over 6 days resulting in 3,584 images. A total of 2,090 images were eventually used for reconstruction.

The entire collection of images was subdivided into 9 sub-projects: the head, left hand, right hand, body, lower base, middle base, upper base, cliff and terrace. This allowed parallel processing of all data and kept the project size below the upper limits imposed by the software and hardware.

The GNSS signals close to the statue were influenced by multipath. For this reason, the project was processed without geotags; the GNSS information was too inaccurate to bring any benefits to the reconstruction and would have misled the camera calibration. The images were processed using Pix4Dmapper Pro software, within which the images were used to calibrate the camera and to reconstruct the position and attitude of each one. Subsequently, the oriented images were processed into a point cloud and a textured mesh. Within every sub-project, the automated reconstruction of Pix4D was augmented with manually placed tie points.  For instance, manual tie points were placed on the lightning rods on the statue’s hands to join the images that were captured on either side of the hand (Figure 3). Manual tie points were also used at locations where sharp shadows confused the automated process. A total of 150 manual tie points were used in all sub-projects.

All of the projects were merged simultaneously with a total of 82 common manually clicked tie points. Then, the software applied a dense matching algorithm to create a dense point cloud by finding as many corresponding pixels as possible in pairs of images. After this step, Pix4Dmapper’s tools were used to crop out the unwanted parts and to filter points from the background. At this point, the entire reconstructed model had a high relative accuracy, but did not carry any scale or position. One length measurement was performed on the base of the statue to set the scale of the model. After setting the scale, the dimensions of the statue could be measured from the model. Table 1 shows the measured distances and the distances reported in the 1924 design drawings. The final point cloud consisted of 134.4 million points (Figure 4) and the 3D textured mesh of 2.5 million triangles (Figure 5). The amount of detail in the reconstructed models depends on the distance of the UAV from the statue.

This project shows that UAV technology allows accurate modelling of structures that are difficult to access. Challenging weather conditions and safety restrictions do not have to be an impediment to a successful project provided careful planning is in place. Division into several sub-projects is required to achieve the reconstruction of very large structures.

Figure 1, Layout of statue and base, with very approximate measurements.

Figure 2, The UAV on the base ready for take-off.

Figure 3, Reconstructed point cloud of the hand with tie points on the lightning rods.

Lisa Chen has a background in geodetic science, with experience in GIS and photogrammetry both in Taiwan and the United States. She works as a technical communication manager for Pix4D in Switzerland. For ‘Projeto Redentor‘, Lisa was in charge of processing the images and creating the 3D model using Pix4Dmapper.

Sonja Betschart has a background in marketing and project management and has been in charge of marketing and communication at Pix4D until April 2015. She set up and managed ‘Projeto Redentor’, including the data acquisition on site in Brazil together with the project partners, PUC University of Rio and Aeryon Labs.

April Blaylock has a Master’s of Applied Science in Mechanical and Mechatronics Engineering with a background in autonomous robotics and computer vision. She works for Aeryon Labs in Canada as senior unmanned aerial systems engineer for R&D. She planned and piloted all drone data acquisition flights for ‘Projeto Redentor’.