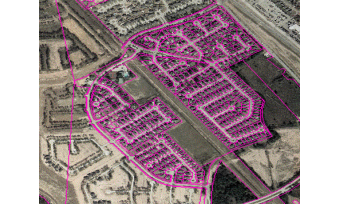 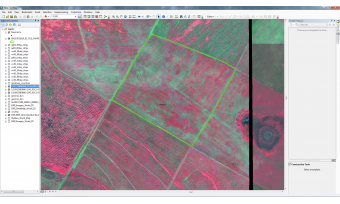 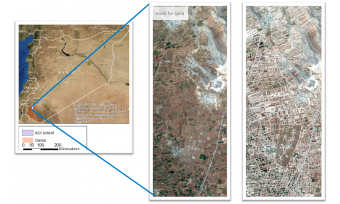 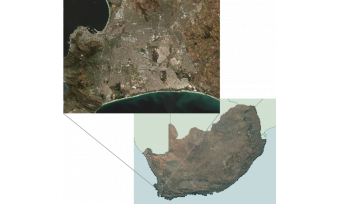 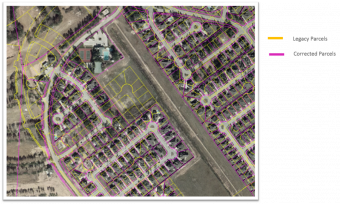 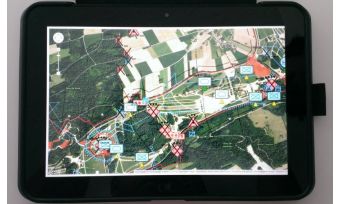 Traditional techniques for developing land administration include high-accuracy field-based surveying of the property boundaries by certified surveyors, and may still be a desired solution for cadastral mapping in residential urban areas. The recent decade has seen a rise in high-detail and high-accuracy satellite imagery that is now able to capture large regions and update them on a periodic basis.

DigitalGlobe, a commercial leader in the satellite remote sensing industry, has been capturing images at 50cm resolution for the last decade. The latest generation of its Worldview systems are now collecting imagery at 30cm (1ft) spatial resolution. Furthermore, the company has now invested in developing accurate and high-quality mosaics of nations that can become the foundation for developing the global cadastre or land administration system (see Figure 1). In countries such as the USA, it is already an acceptable practice to use imagery as a reference for creating urban parcels.

It is estimated that over 70% of the world’s population do not have formal documentation of their land ownership. In developing countries in Asia and Africa, this problem is further exacerbated by inequality in land ownership between men and women. Furthermore, in many of these nations, which have a rich heritage dating back many centuries, land information/ownership records have been passed down through the generations and are not defendable in court. A comprehensive digital and geospatial land administration for the entire country is a requisite for these developing nations. In the case of contested lands, there is a need to build consensus at village level to create a land administration system that is accepted by local citizens.

Imagery at 50cm resolution covering the entire nation allows for faster and more economical creation of a nationwide land administration system, with a proper representation of spatial units (or parcels). It is suitable for the establishment of land administration in agricultural areas – farms, pastures, etc. (see Figures 2 and 3) – and forest areas. For example, the United States Department of Agriculture (USDA) has developed a comprehensive database of agricultural field boundaries (Common Land Unit) for the whole of the USA based on imagery. Depending on the requirements, imagery can also be used in residential areas (see Figure 4).

DigitalGlobe already provides accurate and complete imagery mosaics of nations at 50cm for the entire continent of Africa as well as for two thirds of the whole world. The rest of the world mosaic is anticipated to be completed by the end of 2016. Each mosaic comes with comprehensive metadata at pixel level, on the age of the imagery as well as aggregated statistics at national level on missing/no-data pixels as well as cloud clover. The example shows a 98% cloud-free mosaic of South Africa which is now being updated to make it 100% cloud free, for the entire nation.

National imagery mosaics from DigitalGlobe can be used not only as the foundation for the cadastral maps in national land administration systems, but also to update them on an ongoing basis. It is also important to keep in mind that the cadastral maps need to consider spatial consistency from multiple sources of imagery with varying accuracies. Figure 5 shows an example of spatial registration issues (in yellow) over time, stemming from using multiple imagery sources. While vector alignment and conflation techniques are now available to correct for legacy spatial registration issues, it is paramount to consider the update and maintenance of land administration systems for decades to come.

Imagery mosaics are available for both online and offline use and can be integrated with field tools that allow for field digitisation of land parcels. The imagery maps can also be printed in the field, so that local villagers can draw their land ownership on them, and can later be scanned and converted into a land parcel database. Field tablets that can integrate imagery and have tools for field coordination and consensus are vital for creation and adoption of successful national land administration systems.

High-accuracy and high-detailed satellite imagery mosaics combined with latest technological developments including smartphones, tablets and suchlike allow global land cadastres to be created at scale (see Figure 6). These technologies facilitate rapid creation, maintenance and updates of land administration as well as incorporation of legacy cadastre/records. In combination with additional visual information, printed maps can be used to build consensus at village level in support of gaining acceptance of the land administration system at national/state and local levels.

Kumar Navulur has over 25 years experience in geospatial industry. He received his PhD from Purdue University, USA. He is part of UN-GGIM which advises various international governments on the use of geospatial technologies for governance. He advised the Norwegian mapping authority on use of satellite technologies for their 2025 Destination Mapping project. Also he is a recognised geospatial expert at World Bank, Bill and Melinda Gates Foundation, and other international organisations and governments.