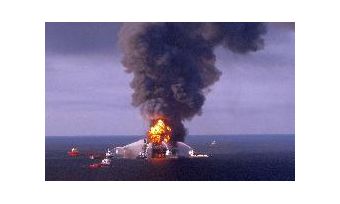 The Deepwater Horizon drilling rig was built in 2001 as a semi-submersible platform specially designed for operations in ultra-deep water. The rig employs a dynamic positioning system to maintain a highly accurate position in open seas with the use only of its propellers. In September 2009 the rig drilled the deepest oil well in history, at a vertical depth of 10,683 metres.

In February 2010 the rig commenced drilling an exploratory well at the Macondo project in the Gulf of Mexico, some 70 kilometres off the coast of the State of Louisiana (USA) at a depth of approximately 1,500 metres below the surface. On 20th April 2010 an explosion caused by a blow-out on the rig killed eleven crewmen. The resulting fire could not be extinguished and on 22nd April 2010 the Deepwater Horizon sank, leaving the well gushing oil out from the seafloor, causing the biggest offshore oil spill ever to have occurred in the United States. The Blow-out Preventer (BOP), a device on the seabed expected to shut down the well in case of emergency, was found to be defective or malfunctioning.

It is now estimated that the gusher is flowing at some 35,000 to 60,000 barrels (equivalent to 6,000 to 10,000 cubic metres) of crude oil a day, the biggest offshore oil spill in history. Experts fear it will result in an unprecedented environmental disaster.

The oil slick will be transported by currents and dispersed by winds, with the coming hurricane season bringing added complications. The National Oceanic and Atmospheric Administration (NOAA), leading US scientific resource for oil spills, has been at the scene of the Deepwater Horizon spill from the start, providing co-ordinated scientific weather and biological response services for federal, state and local organisations. The expertise of hydrographers and use of aerial and satellite imaging will be essential in locating the slick and predicting where it is expected to reach the coast, causing great damage to both flora and fauna.


Photographed is the rig just after the explosion and still afloat. The rig subsequently capsized, at which stage the blow-out preventer should have closed off the well.