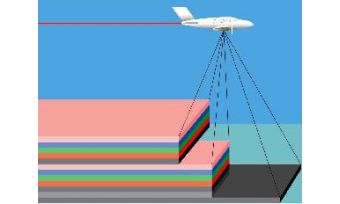 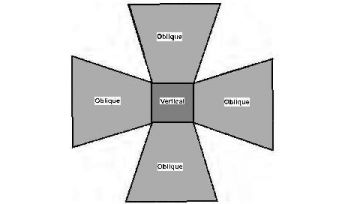 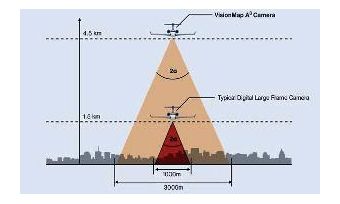 The growing need for geo-data everywhere is driving customers to demand shorter turnaround rates and higher levels of detail. These needs can be met by aerial imagery directly captured in digital format onboard an aircraft. In tandem with the new product survey on Digital Aerial Cameras (see our website), the author here gives an overview of new developments.

In my overview published in GIM International April 2008, I categorised the various digital aerial cameras under linear- and area-array solutions: one of many possible groupings for these systems. Another, based on technological criteria, considers dimension (size, weight and number of pixels of CCD chip in the focal plane), resulting in a distinction between small-, medium- and large-format cameras. Today, in 2011, small-format frame cameras are typically equipped with area CCD chips containing 20 to 30 mega pixels. For a medium-format camera these numbers double or even triple, and for an area CCD chip in a large-format camera they may be nearly ten times as high. Typical applications for small-format cameras are corridor mapping, updating site maps, engineering projects, and as image-acquisition device operating alongside airborne Lidar scanners.

Medium-format
From the application point of view, the larger and heavier a camera, the more stable it will remain under aircraft vibration and other motion, and the more suited it will be for accurate bulk topographic and cadastral mapping of larger areas. However, companies such as Intergraph and Leica, traditionally involved in manufacturing high-end cameras for demanding mapping applications, recognise that remote-sensing professionals, engineers and construction people are looking for cost-effective solutions when carrying out smaller projects. To fill this gap, Intergraph has brought out a medium-format digital camera called RMK D. The system was introduced at the ISPRS 2008 Congress in Beijing, China: low weight and power requirements allow it to fit inside a small, single-engine aircraft, while the radiometric resolution of 14 bits enables the capture of quality images, even in poor light conditions. Image size is 6,096 x 6,500 pixels and the multispectral sensor allows simultaneous capture of true-colour (RGB) and NIR images. The RMK D evolved from Intergraph’s Digital Mapping Camera (DMC), a large-format digital camera introduced in early 2003, of which about a hundred are in operation today.

Linear Array
Leica’s ADS family focuses on accurate mapping, as well as remote-sensing applications. The multispectral sensor collects RGB and NIR imagery simultaneously, in this way satisfying multiple applications. Both the ADS40 and ADS80 have three panchromatic linear arrays at differing viewing angles, enabling creation of reliable DEMs (Figure 1). The CCD linear array of the ADS40 contains 12,000 elements for both the panchromatic and multispectral lines. In the new ADS80, one pair of panchromatic lines are staggered by half a pixel, doubling the number of sensor elements to 24,000 and making it possible to fly at twice the height without compromising Ground Sample Distance (GSD). This, in addition to the digital workflow, enables the ADS family to acquire and process imagery over large areas in limited time. For example, it took four ADS40 cameras sixteen days to capture the most heavily hit parts of Louisiana and Mississippi after Hurricane Katrina made landfall on 29th August 2005, an area of 30,000km2. The GSD and information content of the resulting dataset fulfilled all post-disaster response requirements, including damage assessment for prioritising relief efforts, recovery planning and financial compensation.

The four camera systems from Wehrli, based in New York, USA, and specialised in digital aerial cameras and high-end photo scanners, also utilise push-broom technology. With this medium-format camera family Wehrli wants to address companies striving for an optimal price/performance rate. The 1-DAS-1 has been developed to operate along with an airborne Lidar scanner. The 3-DAS-1 records 3 RGB channels simultaneously and has been developed for large-scale stereo-mapping and ortho-image production. The 3-OC is an oblique camera, and the 4-DAS-1 can record RGB images for nadir/forward/backward and NIR in the nadir direction.

Since the system characteristics of a variety of digital aerial cameras manufactured by nine major companies were adequately covered in my 2008 overview and associated product survey, I would like to continue here with three new digital camera system developments stemming respectively from China, the USA and Israel.

SWDC-4
Highly active in manufacturing and marketing total station s, GNSS receivers, GIS software and other geo-information technology for more than a decade, China is now also producing digital aerial cameras. The large-format camera introduced at ISPRS Congress Beijing 2008 was developed for topographic mapping purposes by Beijing Siwei Spatial Data Technology (Beijing Siwei), founded in 2001 as a subsidiary of the Chinese Academy of Surveying and Mapping and focusing on remote sensing and geo-data processing. The architecture of this camera comprises four non-metric Hasselblad camera heads with changeable lenses. The 37x49mm CCD chip placed in the focal plane of each camera consists of 22 mega pixels. The camera configuration is mounted on a stabilised platform and delivered with integrated GNSS receiver. Experiments, as reported at the ISPRS 2008, have shown that the accuracy is sufficient for stereo mapping. Whether the camera will be a commercial success within the territory of China or abroad seems, however, questionable, as Vexcel announced on 28th January 2011 that China Aviation Aero Remote Sensing Technology (CAARS) was to purchase three UltraCamLp cameras. Why buy abroad when you have something equivalent in-house?

Oblique Imagery
Over the past five years, Pictometry, headquartered in Rochester, New York, US, has popularised the use of oblique imagery of urban areas. In addition to vertical, oblique images are also taken, enabled by a sensor system configured with five cameras, one directed nadir, the others viewing forward, backward, left and right (Figure 2). The shape of the ground coverage captured simultaneously by the five cameras looks like a Maltese Cross, a term first coined by Gordon Petrie and Kenneth Smillie. Depending on the along-track and across-track overlap, each point on the ground may be visible in dozens of images, provided there is no occlusion. The five cameras are mounted rigidly together and their geometric configuration is calibrated to enable accurate measurements in both the vertical and oblique images. The main advantage of oblique images over vertical is better and more intuitive interpretation, making photogrammetry accessible to non-professionals. Oblique images show parts of buildings and other structures invisible in vertical images, making them useful for 3D cadastral applications, determining property taxes and providing building permits. Looked at the other way around, they can also act as a spatial access means to databases containing building information. Geo-referenced oblique images are also useful for highly automatic creation of 3D city models in combination with airborne Lidar and planar topographic maps containing building outlines. An extensive review of recently developed technologies for acquiring multiple digital aerial oblique images can be found in the February 2009 issue of Photogrammetric Engineering and Remote Sensing.

Panorama Camera
The A3 from VisionMap, a company founded in 2004 in Israel, is also an oblique camera, but deviates from the Maltese-Cross design in that it has been developed as a panorama camera aimed at reducing flying and processing costs. The latter is achieved by automation of all processes, from flight planning to triangulation, from DEM generation to orthoimage creation. The system consists of a digital frame camera in which are installed two rotating lenses and a ground-processing system. The two cameras, focal length 300mm and CCD chips placed in the focal plane covering 4006 x 2666 pixels, rotate in sync at high speed. The total Field of View (FOV) is more than 100 degrees across the flight line. During a single sweep lasting four seconds, each camera captures 29 frames (58 frames in total) at a rate of 7.4 frames per second (1 frame per 0.14sec). Two adjacent frames have an overlap of 2%, while the overlap between a twin-frame is about 30% and the forward overlap is 30-60%, depending on flight parameters. For creation of stereo pairs for 3D data extraction, the overlap between two consecutive sweeps (side overlap) should be 50-60%. The long focal length of 300mm enables data capture at high altitude; in one day 5,000 km2 can be captured at 15cm GSD.


The company claims that data capture can be carried out at altitudes three times as high as allowed by typical large-format frame cameras, without compromising GSD (Figure 3).

In many ways the internet provides a more efficient means of communication than printed media. This is certainly true when it comes to rapidly developing technology, when specifications quickly become outdated. As from 2011 we are publishing our regular product surveys online. These surveys cover a wide range of geo-data acquisition and processing systems, varying from total-stations, GNSS receivers and airborne laser scanners to remote-sensing image processing software. Online publication also allows updating of specifications as and when appropriate; we are no longer limited to yearly or biannual updating, as was the case with static paper representation. The new product survey on Digital Aerial Cameras is now available at www.gim-international.com (button: product survey).