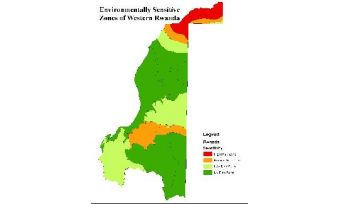 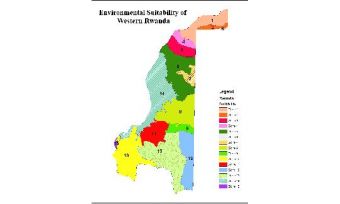 Environmental analysis is a process used to improve decision-making and ensure proposed development options are ecologically, socially and economically sound. Rwanda is one developing country with tremendous natural and human resources which need to be systematically and optimally utilised for all-embracing growth of he country. The author articulates the various factors to be considered in impact assessment for urban planning and development, ecological conservation and identification of risk-prone areas.

Remote sensing and GIS are geo-spatial technologies with important applications in many areas, including natural resources, wildlife management and conservation. This study takes multi-sensor and multi-temporal remotely-sensed data to obtain updated information on natural features. Used in the research were topographical and geophysical maps of Rwanda along with Landsat, Landsat TM and Spot-5 satellite imagery from 1990 and 2000. The objectives were to use geospatial technologies for delineation of risk zones in the study area, and site suitability for different land-use classes employed in western Rwanda (see Figure 1).

Terrain Analysis
Multi-sensor imagery was required to study the area at various resolutions. Remote sensing, along with associated geo-scientific analytical approaches, include various spectral, spatial and frequency domain transformation. Geo-referencing and digitization of the topo-sheet generated a base-map. Contours were also extracted from this and used to generate a Triangulated Irregular Network (TIN) model from which to produce a Digital Elevation Model (DEM) and further slope and aspect maps. Secondary data was collected from existing geological, geochemical and natural-hazard maps of Rwanda, and data collected from field visits. Various filters were applied to the satellite imagery in order more clearly to visualise the structure of the terrain. So-called Laplacian filtering was then applied for edge enhancement. Terrain and structure characteristics were subjected to frequency transformation in order to obtain maximum structure distribution, depiction and translation.

Environmental Layers
Vegetation indexing involves indexing of vegetation cover in a given area. A normalised difference vegetation index (NDVI) algorithm was applied to the images to enhance information on vegetation. NDVI greatly helps in interpreting density of any group of vegetation. Principal Component Analysis (PCA) was performed on the Landsat imagery. Information regarding the most prominent features is stored in PC1, and information regarding less prominent features is stored in other PCs, beginning with bands of higher information level and descending in order to bands of lower level.

Abram's Ratio Analysis creates one RGB colour model composite display combining previously defined ratios, highlighting phyllosilicates in the red layer, ironoxide ratio in the green layer, and vegetation in the blue. Tasseled Cap Algorithm was used for mapping wetness, brightness and greenness. Hydrological indexing refers to the indexing and mapping of the water in an area. It also refers to separating deeper from less deep water bodies. The density slicing approach was used for hydrological indexing.

Detecting Change
Change detection is the sensing of environmental changes using two or more scenes covering the same geographical area acquired over a period of time. It is useful in many areas such as land-use change, habitat fragmentation, deforestation rate, coastal change, urban sprawl, and other cumulative changes; all applications of spatial and temporal analysis techniques such as GIS and remote sensing, along with digital-image processing techniques. Change detection was executed by detecting changes between satellite imagery from differing time periods. To achieve this, Landsat images were used from two time periods (pertaining, for example, to 1990 and 2000).

Differentiating Zones
The factors considered for mapping sensitive zones were elevation, slope and aspect; terrain structure (lineaments, faults density); frequency of natural disasters, and previously made land-use/land-cover maps. Western Rwanda has volcanoes in its northern region, and some parts of the southwestern region are tectonically unstable. This is important field information that is considered in the analysis. Environmentally sensitive zones were delineated using spatial analysis, with consideration for the aforementioned factors; map shown in Figure 2. Products and derivatives of the above analysis were used to demarcate suitable zones. From the environmental point of view, it is very important to analyse a region before developing it. The area was divided into various zones, considering factors such as terrain, vulnerability, sensitivity, land-use classes and change-detection information. The suitability zones in Figure 3 are described in the textbox.

Concluding remarks
The country has huge and as yet unexplored natural resources. Also, reviewing the past decade, there has been very little urban development either. Natural resources could be much more optimally utilised to the benefit of both urban development and environmental conservation in the country. The delineated risk-prone areas depict the various environmentally vulnerable areas. Suitable sites for urban and industrial development, wildlife and forest conservation and mineral exploration have been suggested (see textbox). Some major suggestions draw attention to areas suitable for industry, urban/city development and mining operations. Rwanda is rich in minerals, and this study provides information regarding their occurrence in various areas where mining operations might be undertaken. Areas are also outlined that are flood-prone and/or volcanic and where habitation and industrial activities are not recommended. It is hoped that this study will help in overall planning of agriculture, mining, industrial setup, city expansion and tourist spots.

Acknowledgements
Thanks are due to Mr Sunit Raj and Mr T. P. Singh for mentoring, and to Ms Neha Setia for her advice and help.

Zone1: This is a volcanic area in the high-risk zone and hence not suitable for any industrial setup or urbanisation. Setting up an industry would add to the pollution created by sulphur fumes in this area. The area has occurrence of iron.

Zone2: This area lies 10km to 15km from the volcanic area and is categorised as a medium-risk zone. The presence of latterite soil makes it appropriate for agriculture. The fertile soil can be observed from the Abram's Ratio output.

Zone3: Lying 15km to 20km from the volcanic eruption, this is a low-risk zone. Urban settlement and small-scale industries may be set up in this area. It is suitable for agricultural production.

Zone4: Belonging to the medium-risk zone, this region is suitable for agriculture and small settlements.

Zone5: A no-risk zone, positioned beyond 20kms of the volcanic eruption area. Latterite soils make the region suitable for agricultural production, and non-polluting industries can be set up here.

Zone6: This region is identified as a low-risk zone. Aquaculture can be performed in this area, as it includes a small lake.

Zone7: This region falls within the no-risk zone, and is good for uranium exploration due to the presence of this mineral. Data regarding local occurrence of uranium was collected from geochemical maps of Rwanda

Zone8: Part of the no-risk zone and suitable for uranium and granite exploration, this area is however not suitable for industry due to high altitudes: around 4,000m, as shown by slope map.Zone9: An area falling within the medium-risk zone due to lack of tectonic stability (information gathered from the geological map of Rwanda). Industry is thus not advisable in this area, which has the occurrence of iron.

Zone10: There are indications in this region of the occurrence of iron and gold, and also a possibility of oil exploration. A geologist on field study gathered the information regarding oil exploration.

Zone11: This region is suitable for non-polluting industrial setup and aquaculture, lying as it does near one of the biggest lakes in Africa. The region is also suitable for granite exploration.

Zone12: A low-density habitation area suitable for agriculture due to its fertile soil.

Zone13: This region is highly densely forested and lies near the capital of the country, Kigali. The area might thus be utilised for forest and wildlife conservation. Wildlife sanctuaries could be created in this area. Since it is a mountainous region, a recreation centre might also be suggested for it. In summary, this area could provide a good tourist attraction and is a potential source of revenue collection.

Zone14: This region has surface water and is thus suitable for aquaculture. Oil and gas exploration could be performed in this area.

Zone15: This region is subjected to occasional flooding and is not suitable for habitation or agriculture. Oil and gas exploration could be performed in this area.