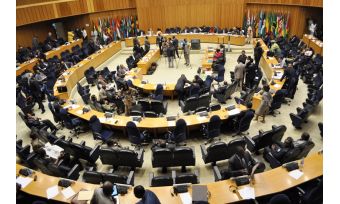 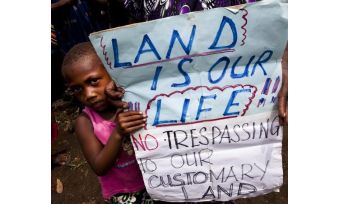 How is it possible that so many poor, vulnerable people and small farmers are the ones to suffer when their land is grabbed by the state, large investors or local elites? Doesn’t the Universal Declaration on Human Rights (1948) state in Article 17 that “everyone has the right to property and no one shall arbitrarily be deprived of it”? Doesn’t the African Charter on Human and Peoples’ Rights (1981) state in Article 14 that “the right of property shall be guaranteed, upon which only may be encroached in the interest of the public need”? Read on for an article that attempts to bring a solution for the victims of land grabbing – a path to the recognition and fair treatment of their property rights, even if they have difficulty proving evidence of their rights because a decent cadastre is absent in their country.

In Africa, however, where land grabbing is reported to occur on a large scale, a ‘small’ obstacle still has to be abolished, namely Article 34(6) of the Protocol to the African Court on Human and Peoples’ Rights (1998): an article that makes it virtually impossible for individuals and NGOs to take a case to court.

The inclusion of a human right to property has always been controversial. After World War Two, when the United Nations Commission of Human Rights prepared the Universal Declaration, these controversies first focused on the political understanding about property. Was individual property the foundation of society (capitalist countries) or did property belong to the people (communist countries)? Furthermore, owning property was the prerogative of the rich, and the question arose as to why the wealthy should be protected by a human right, especially when the origin of that property ownership was not always thought to be fair. Questions also arose about whether states were obliged to give property to anybody, or whether states should only create the social and economic conditions to make property ownership possible. African states pointed out various forms of property on their continent, such as customary, clan and family property. Was that also ‘individual’ property or something else? And if there would be a human right to property, how could states control socially desirable land use, limit it or even expropriate a property in the general interest? It was a small miracle that, after extensive debate, a human right to property was nevertheless introduced in the Universal Declaration. However, as most people know, the Declaration as such is not binding. What are binding are the two emanating protocols, one on civil and political rights and the other on economic, cultural and social rights. And this is where things went wrong: a resolution to not include property in the first one was accepted, but another resolution on the inclusion of property in the second one was adjourned...and that is how things still stand today.

The right to property had more luck in the regional human rights treaties, although remarkably at first sight not in the European Convention on the Protection of Human Rights and Fundamental Freedoms (1952). The controversies in the Council of Europe between western and eastern member states prevented inclusion. However, after much deliberation, a human right not to property but to possession was introduced in the binding elaboration, the first Protocol: Article P1-1 states that every natural or legal person is entitled to the peaceful enjoyment of his possession. The African Charter on Human and Peoples’ Rights (1981) was more straightforward. The attitudes of African states towards property were ambivalent in those days just after independence. Why bother protecting property, when it was still in the hands of the former colonisers? On the other hand, if poor people did own property, why exclude them from protection? The African leaders found a compromise in Article 14 which states that the right of property shall be guaranteed, but vests in the state a rather absolute form of ownership over all its country’s wealth and natural resources. The American Declaration (1948-1969) and the recent ASEAN Human Rights Declaration (2012) also contain protection for property, but they are less relevant here because land grabbing occurs mainly in Africa, and less so in Asia and the Americas. In the context of this article, it is necessary to explore how the human rights treaties protect property de jure and de facto.

The Courts of Human Rights

The Universal Declaration 1948 did not create a court. Complaints can only be lodged by UN member states and appear before the UN Commission of Human Rights. The regional treaties, on the other hand, did establish courts. Considering only Europe and Africa here, the European Council established the European Court of Human Rights in Strasbourg (France) in 1959. This is not to be confused with the European Court of Justice created by the European Union in Luxembourg which is focused on enforcing EU law. The European Court of Human Rights in Strasbourg allows individuals – besides states – to apply to the court when human rights covered by the Convention are allegedly breached. A logical condition is that local remedies should be exhausted. To date, the European Court of Human Rights in Strasbourg has ruled on about 3,000 cases regarding an alleged breach of the right to peaceful enjoyment of possession. In the European context, many cases regard contested expropriation and restitution matters. What can we learn? In the first place the Court is generous when it comes to what ‘possession’ entails; the Court accepts it as a broad concept. Deprivation is possible when it serves a legitimate objective, when the intervention strikes a fair balance between the demands of the general interest and the individual (the intervention should thus be proportionate) and when the intervention complies with legal certainty (compensation). Case law clarifies that when one of these conditions is not met, the intervention is considered to be in conflict with the Protocol. A different situation can be observed in Africa. As long ago as 1987, the African Union installed a Commission on Human and Peoples’ Rights as part of its organisation. The Commission supervises the application of the African Charter. Besides states, individuals also have access to the Commission and can lodge a complaint in written format. Many individuals have already done so. However, the Commission’s decisions are not binding – they only form a guideline for interpretation of the African Charter. In 1998 the African Union accepted a protocol to create an African Court on Human and Peoples’ Rights. After the required formalities, the Court came into being in 2006, based in Arusha (Tanzania). The judgements of the Court are – as with the European Court – binding. If countries do not comply, they have to appear before the African Union that holds them accountable. But who has access to the Court? All states which ratified it, of course, and the African Union (through its Commission of Human Rights). Unfortunately, however, the Protocol only gives access to NGOs and individuals when summoned member states submit a declaration that they accept the Court’s jurisdiction in this particular case. So far only a handful of African states have done this, de facto blocking individuals from asking for the Court’s judgement in matters of property rights. A complicating factor in Africa is that in 2003 the African Union decided to create an African Court of Justice which similarly limits access for individuals. Furthermore, in 2008 it decided to endorse a proposal of President Obasanjo (Nigeria) to merge the existing Court on Human and Peoples’ Rights with the still-to-be-formed Court of Justice into an African Court of Justice and Human Rights. So far, the merged Court is still waiting for sufficient member states to ratify it. In both the draft Protocol for the African Court of Justice and the merger Protocol, the restricted access for individuals and NGOs is confirmed.

There is a lack of precise insight into the current land grabbing situation. Recent publications speak of 80 million hectares of fertile agricultural land that has been sold or leased to large-scale foreign investors, mainly in Africa, but warn that the figures should be taken with a degree of caution. Likewise, publications stating that all those cases of sale and leasing of land to large-scale investors were illegal are nuanced. What remains, however, is the indication that land which is owned by local communities and small individual farmers is being sold or leased to investors. Eviction is reported more than once. In addition there are signs that small farmers are increasingly being pushed aside by local elites who see midsize farms as a good investment. The bottom line appears to be that local and indigenous land rights are being systematically neglected, partly based on the argument that land belongs to the state (or e.g. to a president, who holds it in trust for the people). Be that as it may, wouldn’t it be marvellous if evicted communities and individuals could ask the African Court to consider their case? Propositions by states that they are the sole owners of the land, and that local farmers are no more than users by the grace of the state who can be evicted whenever the state wants, can be examined by the Court. Even if a decent cadastre is not in place, property can still be recognised by the Court based on a wide interpretation of what possession entails. That also brings on board tenure in the form of common or customary property. States can be accountable for their intervention in all private property rights, whether the general interest sufficiently legitimises an expropriation of property, and whether the intervention strikes a fair balance between general and individual interest. And subsequently, if an expropriation is legitimate (which is of course also possible, despite all the negative reporting in the media), the matter of whether the state respects the rule of law in adequately compensating the victims.

The human rights approach shows a way forward in which land grabbing can be examined from the viewpoint of general and individual interests. If only African states would show political will to make themselves accountable in property matters and to allow individuals to lodge a property case to the African Court of Human and Peoples’ Rights. African NGOs have already addressed this matter, but this article is once again an appeal to the African Union to quickly abolish Article 34(6) of the Protocol and its successor, the Protocol for the Court of Justice and Human Rights. Luckily the African Union has the opportunity to improve the protection of the human right to property. In contrast, Asia does not even have a court for human rights yet, unfortunately. To achieve decent protection of the human right to property, much more work is needed there. Meanwhile, in Africa, a quick decision to abolish Article 34(6) appears to be enough for the time being.

Paul van der Molen is an emeritus professor in cadastre and land administration at the University of Twente (Faculty ITC) in Enschede (The Netherlands) and a former director of Kadaster International in Apeldoorn. He is an honorary member of the International Federation of Surveyors (FIG).