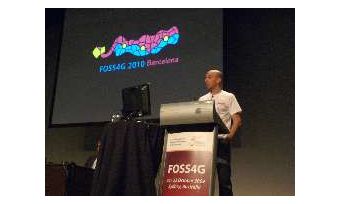 FOSS4G, Free and Open Source Software for Geospatial, is the annual international event hosted by OSGeo, the Open Source Geospatial Foundation, which brings together Open Source geospatial communities of developers, users, and decision makers. Open Source, for those not familiar with the community, essentially means that the software is generally free of restrictions on sale or giving away, and the source code is available to the community.

This year's FOSS4G event took place in October 2009 at the Sydney Convention Centre, in Sydney, Australia. The theme 'User Driven' and it was sponsored by such traditional geospatial organisations as Autodesk, in addition to non-traditional organisations such as Google and, of course, FOSS4G service providers such as OpenGeo and Ingres.

Nothing could summarise the community or event better than Paul Ramsey's opening keynote address on the future of the Open Source economy. The community listened as Paul, of OpenGeo, voiced out loud what we all now realise, that since our community is made up of early adopters and visionaries it's time to take a look at what proprietary vendors are selling: products. He talked about developing a whole product, not just software, so that FOSS4G service providers could access mainstream markets. Indeed, the keynote summed up the growing and stable FOSS4G community in many ways. The whole report can be found on our website.

Workshops
One of the highlights of every FOSS4G event are the hands-on workshop sessions usually held the day preceding the first session. FOSS4G workshops are quite unique, in that lead FOSS4G software developers lead the training sessions and attendees get a chance to learn from the experts in a fun half-day session. This year's workshops included the usual projects such as PostGIS and MapServer, but also a popular session on ‘Making Maps Fast'.

Benchmarking
During the conference a heavily attended presentation addressed benchmarking of the GeoServer and MapServer mapping servers. Each server was tasked with drawing a map image from the same source data and these were compared by their responses. This year saw the friendly competition between servers produce many enhancements to both sets of software. The hope is that next year's event will involve development teams from more mapping servers.

2010
FOSS4G2010 will be held in September 2010 in Barcelona, Spain. This central location will potentially bring together thousands of users, developers, and decision makers from all over the world. If you haven't attended a FOSS4G event, mark this one on your calendar and experience the positive energy and enthusiasm that makes these events unique in the geospatial world.