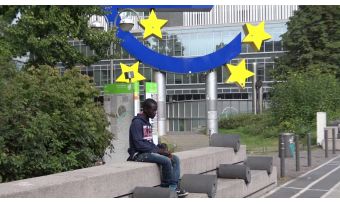 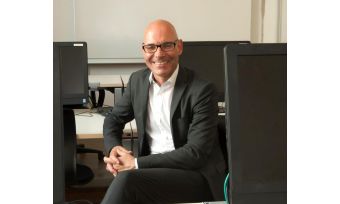 The words of Chancellor Angela Merkel, welcoming victims of armed conflict to her country, led to over a million refugees arriving in Germany. The city of Frankfurt (more than 700,000 inhabitants) has taken its share. The Department of Geoinformation and Public Works at Frankfurt University of Applied Sciences launched a project to find housing for the thousands of migrants, but the scientists found many barriers standing in the way of them obtaining the spatial data they needed.

As a lawyer and geographer, Professor Fabian Thiel is frustrated by the lack of use of spatial data for land management issues in the Frankfurt region of Germany. At Frankfurt University of Applied Sciences, he has supervised a number of projects and he always reaches the same conclusion: for researchers, success in obtaining regional data to combine with the base maps in their geographic information system (GIS) is the exception rather than the rule. And the latest project – to find housing opportunities for groups of refugees – was no different. “With this project, I hoped we could close the gap between theory and practice. The refugee housing problem could be a new chance for the municipality to show the open data philosophy,” he says. But he was disappointed.

Problem 1: how large is the demand? Frankfurt already faced a considerable housing problem, even before the refugees started arriving. It is not known how many extra parcels or buildings are needed because, although the official figure stands at 6,000, the real number of refugees in the city is unknown. After being registered upon crossing the border into Germany, refugees are obliged to go to large, temporary housing facilities all over the country. But many of the young men fail to show up at such centres and go instead to places where they hope to find work – such as Frankfurt, with its strong economy. They find shelter wherever they can, often sharing a room with many others in unused buildings. Even for those who receive an official permit to stay, the housing issue is just as troublesome. Thiel: “Refugees who get admitted are responsible for their own housing situation, but very few will find a house on the private market in Frankfurt or the surrounding area. So they will stay on the streets. Nobody is thinking about this yet, but it will be a nightmare. The accommodation we are looking for could also be a step in between the asylum seekers’ centres and the private market.” When looking for suitable properties, the project team has to take into account certain guidelines: no more than 300 people per building, and individual properties housing refugees must be at least one kilometre apart. Furthermore, according to the Human Rights standard, each refugee must have a minimum of 7m² of floor space.

Problem 2: is refugee housing a priority for the city planners? Fabian Thiel: “It’s a form of real estate investment; most refugees will stay here for many years, if not forever. But rather than being a priority, making buildings where refugees can live safely is regarded as locally unwanted land use (LULU). In many cities, the main informal guidelines for spatial planning of refugee housing seem to be based on the ‘not in my backyard’ (NIMBY) principle, but also on ‘build absolutely nothing anywhere near anybody’ (BANANA).” However, it is no problem in the current emergency circumstances to use land for other purposes than its formally agreed function, e.g. to install temporary modular units on grassland or to use a vacant office building for housing. This is also influenced by the federal goal of reducing land consumption. In Germany today, 80 hectares of greenfield land per day is converted into land for new buildings and infrastructure, but the target is 30 hectares per day by 2020. For the state of Hesse (Germany is a federation of states), of which Frankfurt is the largest city, that equates to a maximum of approx. one hectare per day by 2020. However, there are many ongoing building projects in Hesse and it is unlikely that those goals will be met. As the pressure on the market continues to increase, will investments in housing for refugees move higher up the agenda? “NIMBY and LULU,” the professor answers. “All the enthusiasm is focused on the Frankfurt Skyscraper Development Plan. The aim is to build at least 20 more skyscrapers before 2030, also because of ‘Brexit’ and an influx of financial companies and employees from the United Kingdom.”

Problem 3: is there a culture of cooperation? In Germany the government is normally organised by the principle of subsidiarity: don't do anything centrally that can be done at a more local level. “So, in the case of land management, it is the mayor of Frankfurt who is the absolute, undisputed king: he decides about the spatial planning. Also within the city each department is its own kingdom,” says Thiel, speaking from experience. “Each has its own systems and datasets and they don’t match. They use common base maps and the cadastre data platform, but they are at liberty to use their own data as well, so there are as many versions of datasets as there are kingdoms. Keeping the power at the lowest local level makes it difficult to share it, data included. Under the flag of the European INSPIRE Directive there is the aim to make data interoperable, standardised, open – but it remains difficult to find data, let alone use it.”

What makes everybody even more uneasy is the fact that the policy issue of refugee housing leaves several layers of responsibilities intact: the federal government in Berlin with its general migration policy, several levels of the state of Hesse, and the municipality. “The planning hierarchy for this particular challenge does not fit into the normal hierarchy of subsidiarity. German civil servants are very poorly prepared for that. There is a cultural mismatch, and the lack of harmonised data makes itself felt. Nobody accepts responsibility. Calls and emails to the federal agencies and the other government layers all got the same reaction: ‘You have to be with somebody else’. Even the team in Frankfurt that is responsible for local refugee housing failed to answer our questions: ‘Sorry, no time’. All the IT instruments and European and national guidelines for easy data exchange are there on the table, but the reality is different. That’s been my experience in several projects now. They are clearly not interested in cooperating with knowledge institutions.”

Problem 4: how to get the right data? The students on the project, Nabil Bohlender, Koral Usul and Philipp Lott, created a GIS application using the large-scale map of Frankfurt and the cadastre real estate map with building polygons. They searched for large, uncultivated land parcels and for large, vacant buildings where several hundred refugees could be accommodated by the municipality. “We didn’t find a formal registration of empty land parcels, so we made a rough selection based on the spatial data we had. After visiting the possible options of unused land, we were left with three to four large plots that are suitable to build a housing facility, for instance based on temporary modular units.” They have also selected ten large properties, mainly office buildings, of several thousand square metres. They cannot be sure of the possibilities and additional costs because they were not allowed to enter the properties or did not know who they were owned by. Again, they found those buildings not as a result of their application, which in the end they could only use as a means of presentation of their search results, but simply by walking around the city to see what was empty. “There seems to be no register of empty buildings or even plots such as brownfields. The private landowners do not cooperate with the local planning authorities. And if there are systems with pure facts about the buildings in this city – square metres, number of floors, year of building, building plans, etc. – we were not able to find them,” say the members of the project team.

Professor Thiel narrowed down the question and asked the state of Hesse and the city of Frankfurt to give him a dataset with the region’s (empty) buildings that are public property. “I drew a blank; they told me there is no such overview. For instance, the students selected a potentially suitable building of 10,000m² over four floors that has been standing empty for 15 years. It’s ideally located near the main station with a large greenfield site next to it. Everybody thinks it is owned by the Finance Ministry of Hesse, but they cannot confirm that. Or don't want to.”

Grassroots movements are emerging in which volunteers are being asked to report empty houses and buildings, with the intention that the municipality takes action to improve the housing situation for the citizens of Frankfurt. The atmosphere echoes that of the 1970s and 80s, when left-wing youngsters in Western Europe occupied empty buildings in protest at the inadequate housing situation and the profits made by real estate investors. But this crowd-sourced dataset is not well managed and is not up to date, the students found. The same is true for the formal dataset of ownership data; there is no reliable data source available. The dataset is not only privacy-protected, but it may not even be used for scientific reasons. Furthermore, Fabian Thiel is certain that it is not up to date: “I have seen parts of it, but the local planning authority has the same experience as I have: access to the data is blocked, the update frequency is not high enough and, as far as public property is concerned, the governments don’t know exactly what they own.”

Perhaps the proposed new tax on property will be helpful, because then there will be more information about land use and building data. Every ten years, all buildings in Hesse will have to be (re)valued based on the core data of the building and market value. Unused land will also be taxed. Fabian Thiel concludes: “That will put pressure on updating the ownership registration, and it will give the authorities insight into the quality of the buildings and a registry of unused land. Then, the only challenges left are to harmonise their data and deliver on the open data policy. In a few years’ time, multi-criteria GIS analysis of land management and real estate policy will also be possible in Frankfurt.”

Since 2011, Fabian Thiel has been professor of planning law, real estate and property
valuation in the Faculty of Architecture, Civil Engineering & Geomatics, Department of
Geoinformation & Public Works, at Frankfurt University of Applied Sciences. As a lawyer and
geographer, he focuses on teaching and researching fields such as land law, planning law,
constitutional law, land policy and property valuation, in national and international markets.
The university has 12,471 students; the faculty has 2,000 students, of which approximately
10-15 per year obtain a master degree with a substantial spatial analysis and GIS component.
Before this post, he was active as integration expert / consultant at the Center for
International Migration & Development and the German International Cooperation in Frankfurt
and Phnom Penh, Kingdom of Cambodia.