Advancing Geodesy in Latin America and the Caribbean 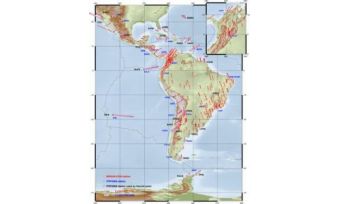 SIRGAS (an acronym of the Spanish term for ‘Geocentric Reference System for the Americas’) is an international organisation under the umbrella of the International Association of Geodesy (IAG) and the Pan-American Institute of Geography and History (PAIGH). Its main objective is the definition, realisation and maintenance of a state-of-the-art geodetic reference frame in Latin America and the Caribbean. This reference frame must support both highly demanding scientific studies and the development of a Spatial Data Infrastructure for the Americas. More than 50 institutions from 19 countries, including the national mapping agencies of Latin America, are committed to SIRGAS in a voluntary partnership.

Due to the complexity of the scientific and technological concepts – digital signal processing, celestial mechanics, relativity theory and a great many others – that make Global Navigation Satellite Systems (GNSS) possible, it is easy to forget the fact that positioning theory is based on one of the oldest and simplest mathematical formulas: Pythagoras’ Theorem. Receiver coordinates are computed by solving a triangle whose vertices are the Earth’s geocentre, the GNSS receiver, and the GNSS satellite (Figure 1). The unknown receiver coordinates are embedded in the length of the side that links the receiver to the geocentre; the lengths of the other two sides are either known – the distance between the satellite and the geocentre – or measured by the GNSS receiver – the distance between the satellite and the receiver. In order to apply Pythagoras’ theorem, the receiver coordinates must be computed in the same reference frame as the satellite coordinates.

The precise GNSS orbits delivered by the International GNSS Service (IGS) refer to the International Terrestrial Reference Frame (ITRF). Hence, GNSS users interested in the accuracy of their results must compute their coordinates in the ITRF. The use of a different reference frame does not ensure compatibility between the three sides of the abovementioned triangle, and might significantly reduce the accuracy of the computed coordinates. SIRGAS is the densification of the ITRF in Latin America and the Caribbean. Its use was recommended to all the American and Caribbean countries at the United Nations Cartographic Conference for the Americas which held in New York, USA, from 22 to 26 January 2001. At present, SIRGAS has been officially adopted by 14 countries in the region.

The major challenge
Within the main SIRGAS objective of defining, realising and maintaining the reference frame in Latin America and the Caribbean, the biggest challenge lies within the ‘maintenance’ aspect. Modern geodesy demands reference coordinates established with an accuracy of a few millimetres while, at the same time, these reference coordinates must be materialised on the ground by means of geodetic marks. These markers are continuously moving due to a variety of geodynamic processes, ranging from the rather smooth continental drift to the sudden jumps produced by earthquakes or seasonal changes caused by hydrological or atmospheric variability. These natural processes change the marker coordinates in different ways: continental drift or crustal deformation occurs with an almost constant velocity, from millimetres to centimetres, per year (Figure 2); variations of hydrologic and atmospheric masses loading the ground produce coordinate changes up to several centimetres with a seasonal periodicity (Figure 3); while intense earthquakes can suddenly change the coordinates from centimetres to metres (Figure 4).
These changes must be continuously monitored and the reference coordinates must be permanently updated in order to keep their accuracy within modern geodesy’s acceptable range of just a few millimetres. The major challenge currently faced by SIRGAS is the definition of a strategy to cope with coordinate changes that are not constant over time (e.g. seasonal changes due to load processes or jumps caused by earthquakes).

The full article is online at http://member.gim-international.com. Please subscribe for free using the Subscribe button in the left hand column.