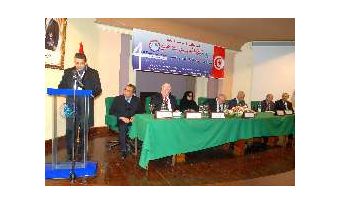 The Center for International Environmental Technologies in Tunis, Tunisia, was the venue for the fourth session of the Geotunis International Congress from 16th to 20th December 2009. Abdul Salam Mansour, Minister for Agriculture and Water Resources, opened the congress, which carried the theme ‘Contribution of Geomatic Technologies in the study of Resource Water and Monitoring of Desertification’.

Hundreds of experts and specialists from 57 countries of Africa, Asia, America and Europe attended the meeting. Addressing participants were His Excellency the Minister for Agriculture and Water Resources; presidential advisor Abdul Karim Aziz; and Her Highness Princess Dr Mashael Al-Saud. Also Professor Dr Ronald F. Abler, president of the International Geographical Union, congress president Mohamed Ayari, and general co-ordinator of the scientific committee Dr Lutfi Momani. The president of the Order of Surveyors-topograph of Lebanon Dr Sarkis Fadous and many other international personalities and scientists took their turn at the Geotechnology exhibition companying the Geotunis congress.

The visiting minister and other guests at the stand of the Tunisian Association of Digital Geographic Information were shown scientific achievements such as the environment and tourism portal of Tunisia and the digital atlas of the Arab world. Exhibitors enthusiastic­ally presented their products, extrapolating their many latest science and technological developments. Among them an American company called SpatialNetworks; a German company, 3G; one from Russia, ScanEx; and one from Italy, Abbaco. The geo-technological exhibition was sponsored by well-known international institutions active in the field of geographic information systems and remote detection and their various applications in the area of hydraulic resources and desertification.