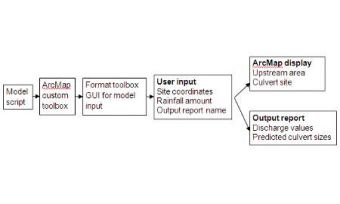 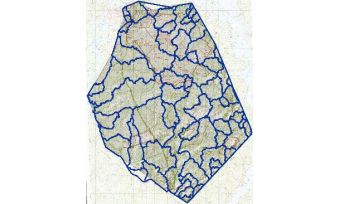 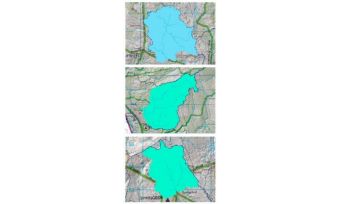 Estimating rainfall discharge is difficult in large catchment areas with varying topography. This leads to widespread inadequacy in culvert design, with resultant damage to these and other drainage infrastructure during storms, when water runoff is high. The authors developed three ArcGIS-based hydrological models which accurately estimate rainfall discharge for storms that occur anywhere between once every two weeks up to once a century, enabling improvements in culvert infrastructure design. The test results prove the potential for GIS to aid in the creation of highly accurate hydrological models.

Although there have been hydrological models in existence for decades, we designed our three completely from scratch; it was easier to develop new models adjusted to a specific area than to reconfigure existing ones. Hydrological models predict discharges at a certain site within a catchment area from rainfall data and terrain characteristics, including soil types, land cover, drainage infrastructure, and elevation and derived parameters such as slope.

Models
Three models were developed: a Provincial Design Flow Method; the Rational Method, and Soil Conservation Service Curve Number Model (SCSCN). The latter two incorporate coefficient values to designate changes in topography. Runoff coefficients ranging from 0.01 (stagnant water) to 1 (steep sloping asphalt road) were derived from soil type, ground slope and vegetation cover. Curve number values ranging from 1 (asphalt road) to 100 (stagnant water) were assigned based on differences in soil type and vegetation cover. Accuracy assessment of these values is critical, as calibrated runoff coefficients or curve number values that deviate more than 0.05 or 2, respectively, from the actual values result in a discharge error of 5m3/s. Calibration was done using hourly discharge measurements collected by a gauge operated by Environment Canada in the River Nerepis. In particular, gauge discharge values obtained during four storms occurring at differing frequency were selected to calibrate the models (Table 1). These gauge values were compared with discharges computed by our models. Through least-squares adjustment, the runoff coefficients and curve numbers were adjusted such that their output corresponded to the gauge value.

The models were transferred into computer code using Python scripting, which offers an integrated development environment with ArcGIS and is the major code incorporated into this GIS package by Esri. Figure 1 shows integration of the Python script in an ArcMap toolbox allowing creation of Graphical User Interface (GUI), model execution and output display.

Figure 1, Schematic of the integration of the hydrologic models within ArcMap.

Area and Data
The area we chose for testing our models was Canada's largest army training base, located near Gagetown and covering an area of 1,129km2 with topography varying from 0m to 454m elevation above mean sea level. Soil types were obtained from Service New Brunswick and stored in the form of vector polygons. The Geomatics Cell from 3Area Support Group (3ASG) Engineer Branch at CFB Gagetown provided a GIS layer of vector polygons containing five land-cover classes: forested areas, grasslands, wetlands, lakes and streams. The 3ASG Geomatics Cell further provided culvert infrastructure classes represented as vector points, data about the streams in the form of vector lines, and elevation data consisting of a Lidar Digital Elevation Model (DEM), grid size 1.75m and elevation accuracy 15cm. Ground slopes, flow directions and accumulations, and watershed boundaries were derived from this Lidar DEM.

Roads, present in the Lidar data as elevated linear structures, may act as barriers which block water flow at a culvert site. To rectify this, DEM spot elevations at more than 2,900 existing culvert infrastructure sites were breached (levelled), cutting through the road to allow water flow. A watershed GIS raster layer, containing flow directions and flow accumulations, was extracted from the Lidar DEM using ArcMap Hydology tools (Figure 2).

Accuracy
After inputting site coordinates and rainfall amount per hour in millimetres, the model calculates the upstream area above the culvert site (Figure 3), discharge values and culvert diameter (Table 2).

Reference data was limited in availability. Therefore, testing focused on locations where culverts and recent washouts were present. Table 3 presents the differences between existing and model culvert diameters for a hundred-year frequency storm with rainfall of 43mm/hour averaged over 58 locations.


Also investigated was the impact of a storm on 14th December 2010, which dropped 105mm of rain over a 24 hour period. Based on an equivalent amount of rainfall, 34 locations with washed-out culverts were analysed; 29 of 34 washed-out culverts were predicted to be under-designed, providing an accuracy of 29/34 = 85%, while 18 of 24 unaffected culverts were predicted as adequately designed, resulting in an accuracy of 18/24 = 75%. This storm served as the litmus test for model output accuracy, offering a quantitative threshold value between under-designed and adequately designed culverts.


Accuracy was assessed by comparing reference culvert discharge values with model output from over a hundred locations (Table 4). Initially the accuracy was envisaged as better than 90%. However there was only one gauge available for calibration, and a limited number of culvert designs. As a result, obtaining accuracies better than 75% was a significant achievement. Use of further empirical data from other gauges allows for improvement in the coefficients and hence model accuracy.

Future
The model will be reconfigured to aid in culvert design at Canadian Force Base Kingston in Ontario. The model accuracies gained here will determine the potential for further distribution both within the military and commercially, in addition to furthering interest in such models.

Acknowledgements
Thanks to the staff at the Geomatics Cell for their support.