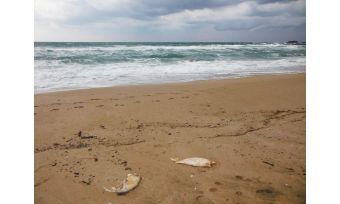 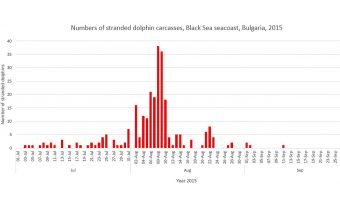 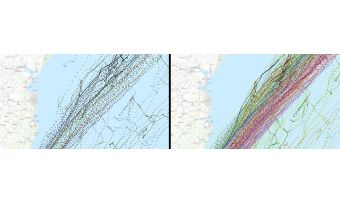 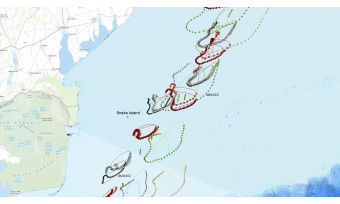 In the summer of 2015, more than 300 dead dolphin calves were found along the Bulgarian Black Sea coast. As no governmental institution investigated this strange case, an international team of scientists was brought together to collect and analyse various types of data. Using the MOTHY model and the available data, more than 50,000 points were reconstructed in reverse time from 252 different representative trajectories of dead dolphin bodies floating in the sea. To determine the exact place of death of the dolphins, advanced geographic information system (GIS) analysis was performed on the available time-aware data. This unique interdisciplinary approach has enabled the scientists to discover the possible cause of death for probably thousands of dolphin calves.

A wildlife disaster unfolded on the Bulgarian Black Sea coast in the summer of 2015. Hundreds of dead baby dolphins (Phocoena phocoena) were discovered on beaches along the 378km-long coastline. In July and August, carcasses of baby dolphins were washed up on almost all Bulgarian beaches, particularly after strong winds. Due to the specific sea currents in the Western Black Sea at that time of the year, only a small percentage (5-10%) of carcasses reached the shore. As the number of registered cases amounted to more than 300, it was suspected to be a very large-scale wildlife disaster which most likely involved thousands of dolphin victims. The incidents were found to be periodic in time, which gave the scientists a clue about the possible cause. There were no cases along the coastlines of neighbouring Romania and Turkey, but it was evident that most of the carcasses had been in the water for more than 20 days. Due to the complexity of the case it was important to obtain as much data as possible, and to structure and analyse it using different approaches in order to identify the probable cause of death.

Most of the sightings and information about the deaths came from citizens and tourists. The state institutions lacked data because there were no prior procedures in place for such incidents. However, the non-governmental organisation called Save Koral Beach immediately devised a workflow for collecting valuable data and created an emergency network of supporters, colleagues, concessionaires, beach tenants, lifeguards, divers, surfers, spear fishermen, fishermen and tourists. Social networks, in particular the ‘Save the Dolphins’ Facebook group, were used to record sightings and for communication purposes, such as for collecting information details and exchanging photos and information. The huge response soon revealed that the number of dead dolphins was far higher than initially expected (Figure 1). The collected data consisted of detailed information including location, time and photos. All the data received was directly published online via a web map application (http://dolphins.koralbeach.com) so that everyone could check their own sighting and give further detailed descriptions if needed. The largest number of cases was found to have occurred between 1 and 12 August 2015 (Figure 2). Therefore, this period was chosen for detailed analysis and investigation. From the photos for each case, experts determined the approximate time of death of each dolphin. Subsequently 28 representative cases were chosen within that time period, spread evenly throughout the Bulgarian Sea coastal region. Data was organised in a geodatabase containing the coordinates and time of appearance of each carcass, time of death, photos and other attribute information.

The next step was to identify the place of origin of this wildlife disaster. Simulations of the time-reverse movement of dolphin carcasses were performed using the MOTHY numerical model. That model was developed around 20 years ago by the French national weather service Météo-France, initially to simulate the drift of containers on the surface of the sea and the movement of oil spills but was later expanded with other functionalities to support search and rescue operations. The MOTHY model can also predict the movement (or simulate reverse-time trajectories) of animal carcasses, as was required in this study. The numerical model needs bathymetric data, information about the location of the stranded dolphin carcasses and an estimate of the time period of their drift in days. It also needs meteorological information, such as data about the winds at an altitude of 10 metres above the surface of the sea and the atmospheric pressure data for the entire period of the simulation. The weather data in this study came from the regional atmospheric model ALADIN which is used by the Bulgarian national weather service, the National Institute of Meteorology and Hydrology (NIMH). Data on sea current fields at the mixed-level depth of the Black Sea obtained from the American ocean model HYCOM was additionally used as input. Using all these data inputs, the MOTHY model simulates first surface currents and subsequently the movement of the floating objects, taking currents, wind, buoyancy and turbulence into account. The output of the model is a set of back trajectories for different levels of immersion of the carcasses.

For the 28 selected cases, 252 trajectories (nine per case) were computed for varying levels of immersion. Approximately 50,000 possible points were obtained from these trajectories: one point for every three hours during 25 days (or less) in reverse time (Figure 3). The raw data obtained from the model was reformatted for advanced time analysis using Esri’s Tracking Analyst, an extension for ArcGIS for Desktop. A time window of one day and three days for every trajectory was used to compensate to some degree for the potential time errors in the data. All 252 trajectories were investigated in reverse time in the hope of identifying a concentrated cloud of trajectory points somewhere in the sea. Eventually such a concentration was indeed found, located 35km northeast of Snake Island in the Exclusive Economic Zone of Ukraine in the Black Sea (Figure 4). Some of the carcasses were found hundreds of kilometres away from there after more than 20 days of floating in the sea.

The time of the occurrence of the selected cases was also determined and was found to be between 25 and 26 July 2015. Knowing the place and time of the incident was the first step towards discovering the cause. During deeper analysis of the remaining available data it was established that some of the dolphin calves also died around 1 August 2015 in the same place, so there was clearly some evidence of a cyclical event. In most cases it was not possible to determine the exact cause of death by necropsy because the carcasses had already spent such a long time in the sea. However, necropsy was able to prove that drowning had been the cause of death for some of the dolphins. Drowning of dolphin calves mostly happens when they are caught in fishing nets as by-catch. Illegal, unreported and unregulated (IUU) fishing is one of the most devastating activities in our seas and unfortunately it is happening all over the world. The Black Sea is notorious for such activities, especially illegal turbot fishing by gillnets. The area around Snake Island is one of the Black Sea’s richest places in terms of wildlife, including the turbot population. The illegal turbot gillnets are often hundreds of kilometres long and are the main cause of death globally, especially for Phocoena phocoena due to the specific anatomy and behaviour of this species. Although the scientists now knew the place, time and cause of death, the next challenge was to find the offender. Historical data of marine traffic (marinetraffic.com) based on the automatic identification system (AIS) was obtained and analysed, but this produced no results due to the fact that illegal fishing boats never activate their AIS. However, before completing the crime scene investigation, a thorough analysis of the data of all cases in the summer of 2015 made it possible to mark several places in the Black Sea where illegal fishing of turbot might be occurring.

The Black Sea is an arena for IUU fishing, gas and oil investigation and production, military activities and pollution, with an evident lack of adequate control. The approach explained in this article can be used for a wide range of applications, investigations or rescue missions at sea, without the actual need for satellite and sensor data, border police or military information. Many people contributed their expertise to this dolphin crime scene investigation, which has also helped to stimulate the widespread communication of this topic. The authors hope that publicity for this severe wildlife disaster in the summer of 2015, causing the death of probably thousands of dolphin calves, can prevent further depletion of the small population of Phocoena phocoena, turbot and other marine wildlife species in the Black Sea.

Atanas Rusev is an engineer, researcher and GIS specialist at Bulgarian Geoinformation Company. He has been active for more than 25 years as a mountaineer and as a cave explorer in Club Extreme. His main interest is in methodologies for cave mapping, mobile GIS and GIS Server implementations. ([email protected])

Vasko Galabov is an assistant professor in meteorology in Bulgarian Academy of Sciences – National Institute of Meteorology and Hydrology (NIMH-BAS). His area of research is marine meteorology, marine numerical modelling, climatology and atmospheric modelling. ([email protected])

Razvan Popescu-Mirceni has a PhD in biology and is the co-founder and general manager of the Oceanographic Research and Marine Environment Protection Society Oceanic-Club from Romania. His main interest is biodiversity studies, especially on cetaceans with over 20 years of field research experience. ([email protected])

Figure 1, Carcasses of dolphin calves. Over 300 dead dolphin calves were washed ashore along the Bulgarian Black Sea coast throughout August 2015.

Figure 2, Number of stranded dolphin carcasses in the summer of 2015.

Figure 3, Points (left) and trajectories (right) computed using the MOTHY model when searching for the place and time of the incidents.

Figure 4, The place of the occurrence after GIS analysis.