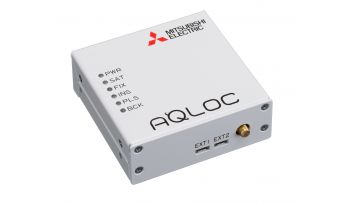 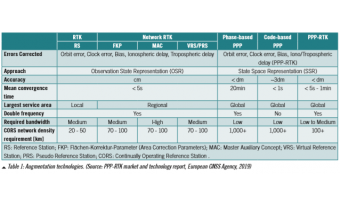 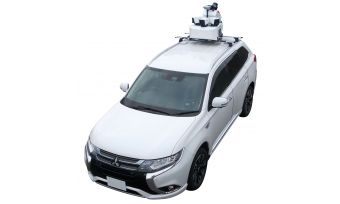 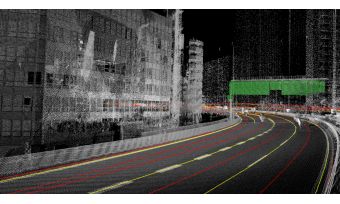 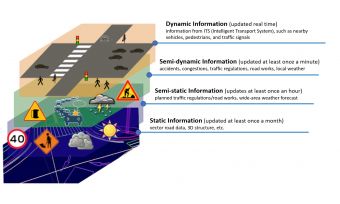 A solution based on global augmentation services could hold the key to performing near-real-time GNSS corrections to support high-precision dynamic applications such as autonomous driving.

Mobile mapping, automated machine guidance and other dynamic applications employ global navigation satellite system (GNSS) receivers for positioning. To obtain centimetre-level positioning accuracies, augmentation services are needed to correct for atmospheric signal disturbances, clock errors and satellite orbit deviations. A major limitation of many solutions is that accuracy comes at the expense of long convergence times, which impedes the application in high-precision dynamic applications. This article outlines a solution based on global augmentation services.

For dynamic applications, the corrections must be instantaneously (in near real time) available at the GNSS receiver. Phase-based PPP is a well-appreciated solution among land surveyors, but one of the limitations of its use on moving platforms is that it can take half an hour or more to obtain stable and reliable 3D coordinates. That means that dynamic applications require short convergence times. They also require augmentation services and transmission of the correction data at low bandwidth (Table 1). The large data volumes that RTK and NRTK require limit the communication through ground stations and thus the size of the service area. The need for instantaneous processing of the corrections requires a global network and transmission of the corrections through communication satellites, but these have low throughput data channels, which limits the data volumes.

Since PPP-RTK augmentation services have global coverage, rapid convergence time and centimetre-level accuracy, they are attractive for niche applications as well as mass-market applications. The resulting demand has stimulated commercial service providers and the Japanese government to offer PPP-RTK wide-area services with rapid convergence times (Table 2). The Japanese Centimeter-Level Augmentation Service (CLAS) provided by the Quasi-Zenith Satellite System (QZSS) and Safe And Precise Augmentation (SAPA) premium service use an open data format that enables many GNSS vendors to manufacture PPP-RTK-ready receivers. The open format facilitates low bandwidth, high accuracy, availability, reliability and integrity for safety of life applications. The SAPA premium service – released on 31 January 2020 by Sapcorda Services GmbH – can be used throughout most of Europe and the USA. Mitsubishi Electric has launched a PPP-RTK GNSS receiver for CLAS and will soon launch a similar receiver for the SAPA premium service in Europe and the USA.

CLAS – operated by the Japanese government and in use since 1 November 2018 – is the first free-of-charge and nationwide PPP-RTK service. It enables automated operation of road and utility vehicles, docking of ships and guidance of drones, and supports agriculture and disaster response. In the ground segment, GNSS measurements from continuously operating reference stations (CORS) are used to compute corrections that are broadcast through satellites using the L6 band (1278.75MHz). The precise coordinates are available almost instantaneously after initialization. The data format of the corrections, called Compact State-Space Representation (CSSR), requires a bandwidth that is a factor thousandth lower than that of RTK. Together with the short convergence times, CSSR facilitates global high-precision augmentation services. Galileo High Accuracy Service (HAS) is considering CSSR for maintaining interoperability between Galileo HAS and QZSS CLAS. GNSS receivers for PPP-RTK services using CSSR are beginning to be released worldwide. In Japan, for example, the AQLOC Light for CLAS service was launched in November 2019 (Figure 1).

Mobile mapping systems (MMSs) are widely used to generate highly accurate 3D maps and spatial data for surveying, infrastructure maintenance and road and tunnel inspections. For example, the Japanese consortium Dynamic Map Platform Co. has mapped all 29,205 kilometres of Japan’s highways using Mitsubishi Electric’s MMS (Figure 2). With a precision of 25cm, the resulting 3D maps are used for automated driving. The consortium is led by a government fund and Mitsubishi Electric, and supported by investments from all major Japanese automotive manufacturers as well as survey and mapping companies. The digital twins created by MMS enable operators to visually identify which roads require maintenance (Figure 3). Artificial intelligence can be used to identify the best maintenance procedure to minimize overall costs, and the Internet of Things can help to enhance the digital twins to create value-added applications.

High-precision positioning, which today is mostly based on GNSS technologies, is widely used for surveying cadastral boundaries, construction sites and mines. The accuracy ranges vary from millimetre level to metre level. With centimetre-level accuracy, high-precision positioning by PPP-RTK can cover many of these applications with easy procedures that provide the measurements almost instantaneously. No own base stations consisting of expensive high-accuracy geodetic GNSS stations are necessary. Some professionals prefer traditional surveying methods for certain applications, especially in locations where it is not possible to receive sufficient GNSS signals. For example, urban canyons may degrade PPP-RTK performance. In such cases, other sensors or systems may complement the GNSS measurements.

In open-pit mining, the trend is towards increased automation. Some companies, such as Rio Tinto, have already started to operate with driverless trucks which require decimetre-level accuracy for guidance. Here, one alternative to establishing a private RTK network is the use of a global PPP-RTK service. Obstacle avoidance may require millimetre-level accuracy and this calls for alternative or complementary technologies. Meanwhile, in precision agriculture, the aim is to increase yields and worker safety while also reducing the use of fuel, pesticide and fertilizers. Guidance of farm machinery and unmanned airborne systems requires high-precision positioning, which relies on wide-area PPP-RTK services such as CLAS. The SAPA premium service could be a key enabler.

The cornerstone of autonomous car navigation is high-precision GNSS, which provides high-precision absolute positioning supported by cameras, Lidar and other sensors. A complex architecture is required to ensure the proper functioning of the ensemble of sensors. Positioning accuracy is not the only concern; availability, integrity and robustness are also important factors. Augmentation services are continuously being developed and improved to meet these needs. Vehicle-to-vehicle communications, or vehicle-to-infrastructure communications (V2X), are essential for autonomous cars. Such communications are based on the Dynamic Map, a major research spin-off of the Automated Driving for Universal Services (ADUS) project of the Japanese Strategic Innovation Promotion (SIP) programme. The road maps consist of dynamic information, semi-dynamic information and semi-static information (Figure 4). These three layers are necessary for the safe manoeuvring of vehicles. The creation of static information, which is a fourth layer consisting of a high-precision 3D map, has been a nationwide cooperative effort.

It will take some time for PPP-RTK to become mainstream because the technology is complex. But the convergence to reliable centimetre-level positioning is easy, the service area is large, and the low bandwidth for correction data transmission will contribute to widespread use. Since CLAS and SAPA premium service use an open data format, AQLOC Light users will be able to find many receiver solutions for PPP-RTK in the near future.