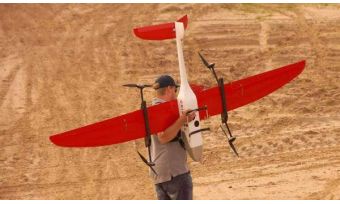 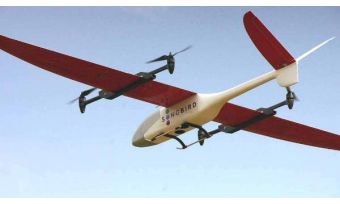 Unmanned airborne systems (UASs) – aircraft which fly without human pilots on board – have soared in popularity as surveying devices. Today they are applied in a wide variety of 2D and 3D mapping, inspection and monitoring tasks. So far there have been two broad categories: fixed wings and multicopters. However, recent advances have led to a third category: the hybrid UAS/UAV, which combines the best of both worlds.

After flight, the recorded GNSS and IMU data is usually used to georeference the sensor data. The sensors on board include RGB cameras, near-infrared (NIR) cameras, thermal infrared (TIR) sensors and Lidar. Some UASs allow two or more sensors on board so that NIR images and Lidar points can be recorded at the same time. The rapid rise of the UAS ensued from a once-in-a-decade convergence of developments. Micro-electronics, auto-piloting, wireless communication, supermaterials that are strong yet lightweight, compact digital cameras, image processing software, miniaturisation of GNSS and IMU systems, high-charge batteries – they all come together in a UAS. Markedly, the progress of power capacity of high-charge batteries is just 7% per year and, compared to the other UAS components, the battery notably adds to the payload. Supported by the accomplishments in artificial intelligence and computer vision, today’s photogrammetric software enables high automation of the chain from flight planning, self-calibration of consumer-grade cameras and aero-triangulation up to the creation of DEMs and orthomosaics as well as their confluence: 3D landscape and city models.

In GIM International’s UAS Special 2014 I grouped UASs into two broad categories: fixed wings and multicopters. The first type uses the uplift abilities of its wings to reduce energy consumption and thus to stay airborne for longer than a copter with similar dimensions. The wings also enable high-speed flying and the capture of larger areas per flight. A fixed wing is thus better suited for 2D and 3D mapping of extensive areas than a copter. So, why use a copter? Copters are more manoeuvrable, they can hover and, in contrast to fixed wings, they can take off and land in small spaces as they can ascend and descend vertically. Hence, a copter is ideally suited for capturing single buildings and small areas. So is the choice limited to either a fixed wing or a copter, as my categorisation indicates? No, as a result of recent advances I have to readjust my grouping into two types and add a third category: the hybrid. Aerolution, a Berlin-based company specialising in developing and marketing UASs for professional purposes, has recently launched the Songbird 1400. This UAS combines the pros of both the fixed wing and the chopper in one and the same aircraft. Basically the aircraft is a fixed wing but the four rotors are not mounted rigidly on the wings; the blades can rotate from the vertical pose, normal for a fixed wing, to horizontal. The horizontal pose provides the aircraft a vertical take-off and landing (VTOL) ability as if it were a copter. With a wing span of over 3 metres and maximum take-off weight (MTOW) of 7.8kg the UAS can take flight with wind speeds up to 6 Beaufort (13 m/sec) and stay in the air for over one hour, provided that the copter facility is only used for launch and landing. Hovering and other copter-like manoeuvres during data capture consume the same amount of energy as a copter, reducing air time. Unlike other fixed wings, the hybrid does not require a runway, catapult or parachute. This reduces the risk of damage to on-board sensors and other components. The UAS can carry two sensors, e.g. a TIR sensor and an RGB camera, simultaneously. During Intergeo 2015 held in Stuttgart, Dr Hans-Peter Thamm, one of the founders of Aerolution, provided a convincing outdoor demonstration.