Zooming on a Groundbreaking Revolution 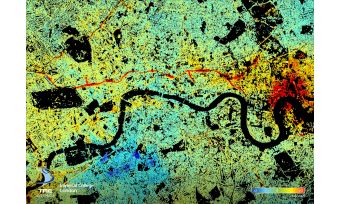 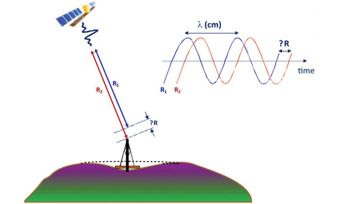 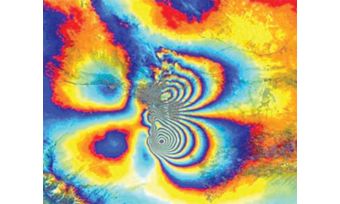 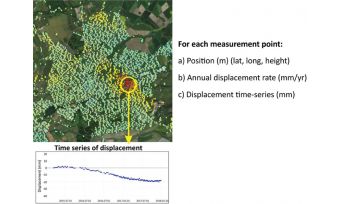 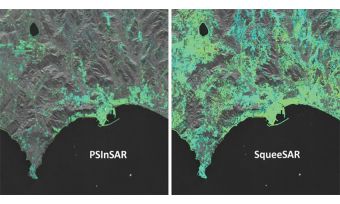 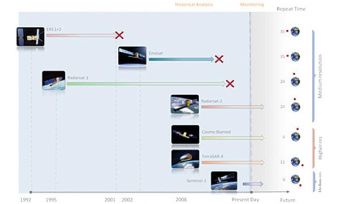 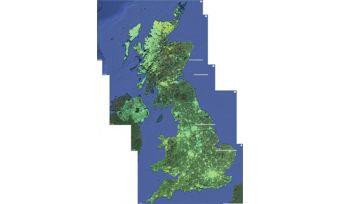 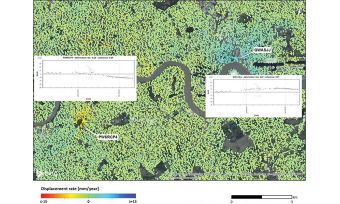 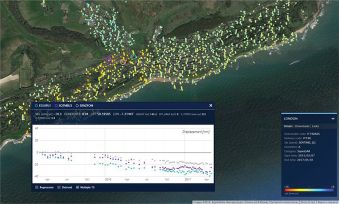 Satellite radar interferometry (InSAR) is a technique that can measure millimetre-scale movement of the ground from space. It does this by comparing the return echoes, and thus the signal-path length, from two or more radar images taken over the same place, over time. Modern InSAR is now used by a range of industries concerned with ground or structural stability, from building development and control, to oil and gas production, to mining, to road and rail management. This article explains some key aspects of InSAR technology, including its innovative use to produce ground stability maps.

InSAR is based upon ‘repeat-pass’ (multi-temporal) data collected by radar satellites orbiting the Earth at several hundreds of kilometres altitude. These satellites actively emit microwave radiation and record the echo on a pixel-by-pixel basis. The echo comprises a sine wave caught by the receiving antenna at a specific point in its 360° phase cycle. All things being equal, the echo response in any subsequent image for this pixel will be caught at the same point. However, in real life, all things are not equal, and an amount of phase shifting between images can occur for various reasons, including; system noise, instrument vs target geometry, influence of topography, decorrelation due to ground-cell disturbance (e.g. vegetation movement), atmospheric refraction, and then the signal in which we are most interested; any difference in the signal path length due to movement of the ground away from or towards the satellite (see Figure 1).

The first three of these phase-shifters can be corrected. The effects of most vegetation, or other ground-cell decorrelation, cannot be overcome, but can be helpfully indexed as a quality measure of coherence. Signal refraction, however, cannot usually be corrected, and becomes a main limiting factor in the ‘displacement resolution’ of the InSAR process applied.

InSAR processing in its simplest form for movement detection uses two radar images of near identical specification, bracketing in time the event of interest, say, an earthquake. The phase data of the first radar scene is compared with that of the second one to produce an interferogram (see Figure 2) that shows the different range values between the two image dates - the displacement resolution of such a product is typically one or two centimetres at best and is limited mainly by the round trip of each radar signal through the atmosphere. Indeed, rain-clouds and other atmospheric phenomena can severely refract signals and completely disrupt useful measurement.

Although conventional interferometry has its limitations, in some commercial scenarios such as open-cast mining where potential movements can be relatively large and rapid, these products can have real value in augmenting ground-based instruments to provide regular and fast safety assessments. However, for smaller, more subtle movements, the vagaries of our atmosphere were always going to prevent 2-scene differential interferometry from developing into a tool of more clinical precision.

Around the turn of the millennium, a team led By Professor Fabio Rocca at Milan Polytechnic came up with an elegant solution to the effects of the atmosphere that exploited the large archives of satellite radar data that were being systematically collected by ESA’s ERS missions (Ferretti, Prati, & Rocca, 2001). The technique they invented looks at all the images archived over a certain location to identify arrays of ground features that naturally and persistently reflect back to the satellite in every image - ‘persistent scatterers’ (PS – sometimes referred to as ‘permanent scatterers’). The phase for each scatterer is cross-compared across all the scenes of the archive to calculate any movement. By analysing a minimum number (a few tens) of images, the major effects of the atmosphere can be modelled out, and displacement resolution improved by an order of magnitude over conventional InSAR. Quite remarkably, using this technique, movements of the ground as small as a millimetre per year can be measured from 700km away in space. Persistent scatters are typically buildings, infrastructure, or even bare rocks, and in urban environments can number from a few hundred, to many thousands of points per square kilometre, depending on satellite resolution. In Figure 3 we can see an array of InSAR measurement points (permanent scatterers) related to a small town within an agricultural context. The points are colour-coded by average velocity; green points are stable, yellow-red points are moving away from the satellite, in this case, subsiding. Each point holds a time-series that can reveal trends in deformation.

Since 2010, further refinements to the ‘PS’-InSAR process have ensued to squeeze as much out of the data as possible. Persistent scatterers are related to the radar impulse responses of individual ground-cells, and their point spread functions result in single points (even though the satellite spatial resolution might be, say, 20m x 5m (Sentinel-1), a correctly-oriented, 1m trihedral corner reflector in an uncluttered field would still be clearly discernible). Through further advanced research, the arrays of PS measurement points have now been joined by arrays of ‘Distributed Scatters’ (DS), where clusters of ground cells with adequate coherence but low amplitude are aggregated to create a secondary form of measurement point, thus significantly increasing overall coverage (Ferretti, Novali, Rocca, & Rucci, 2011) (see Figure 4).

So, what are the actual products from the PS+DS InSAR process? The main output is the array of measurement points as a spreadsheet. For each point, its location, elevation, average velocity, time-series, and quality parameters are given. This data enabled a 2D vector plot to be visualised in a GIS where each point is colour-coded depending on velocity in the line-of-sight of the satellite. Depending on software, clicking on a point will reveal its time-series where the evolution of its motion can be examined. The overall period measured is user-specified and archive-dependent, but data for some applications go back to 1992, so ground motion trends over the last 26 years can be assessed. This data can be superimposed by other geospatial layers to determine any coincidence of ground motion to help assess risk.

It is not suggested at all that InSAR is a panacea for monitoring ground motion, nor does it replace conventional survey techniques. It does, however, have its unique perspective and ‘non-invasive’ attributes, and can help prioritize ground surveys, or reduce their required frequency and density; moreover, it can provide displacement data over very wide areas (thousands of square km), where the cost of a conventional survey would be prohibitive and not always possible.

Although a remarkable technology, InSAR has limitations;

The Era of Copernicus

Copernicus is the world's largest single Earth observation programme, directed by the European Commission in partnership with ESA (www.copernicus.eu). The programme went live in 2014 with the launch of the first of the Copernicus Sentinel satellites, Sentinel-1a, a high-quality radar specifically configured for operational InSAR service provision. This was joined a year later by Sentinel-1b, an identical sister satellite placed in orbit 180° apart, to double temporal resolution of the overall mission to an InSAR-compliant repeat every six days. Sentinel-1 has since been joined in orbit by the (non-InSAR) Sentinel-2, 3 and 5 missions that are focusing on other issues such as agriculture, pollution and climate change. The data from all Sentinel missions are free and openly available via the Copernicus Open Access Hub (https://scihub.copernicus.eu), although of course they need processing. For more information on the Sentinel missions, see https://sentinel.esa.int/web/sentinel/missions.

Sentinel-1 has disrupted the InSAR market - in a good way. Finally (at this ‘medium’ resolution), after 20 years of scrabbling around trying to develop commercial markets with unreliable or non-existent radar data, we now have reliable global coverage that repeats every six days from two different look-angles. That equates to 120 regular acquisitions a year over all areas. As less change is occurring in between image acquisitions, overall coherence is higher (although vegetated landcover still remains problematic). Given the right processing in the right circumstances, Sentinel-1 data provides clean, precise InSAR measurements. Furthermore, robustness and continuity are assured, with follow-on satellites already in the pipeline. This fosters confidence and enables the public and private sectors to build satellite services into their workflows and benefit from the many advantages of operational satellite remote sensing.

It must be emphasised that Sentinel-1 provides what we term ‘medium-resolution’ data, meaning that derived InSAR products are mostly suitable for wider-area, synoptic analysis of ground and structural motions, equivalent to around 1:50,000 scale mapping. Other higher resolution satellites are available for more detailed inspection of individual buildings or infrastructure. Sentinel-1 data can be considered useful for identifying ground motion hotspots over a wider area that might then demand a closer analysis with a higher resolution radar mission, such as AIRBUS’s TerraSAR-X that will give results in urban scenarios to around 1:10,000 scale. Figure 5 shows the main InSAR-compliant missions, past and present.

Extraordinary volumes of data are downloaded from Sentinel-1, currently around 3.5TB per day (>1 PB per year). As of February 2019, 3.5 million Sentinel-1 products were available for download, their raw versions representing ~7PB total. Each raw radar image is around 8GB. The sheer amounts of data now available challenge computing power and traditional methods of image processing. Fortunately, through Moore’s Law, computing power has kept up, and rather than analysing individual images, big-data principles mean that complete multi-temporal archives are being intelligently mined to extract new types of change-data. PS-InSAR was perhaps the ‘remote sensing pioneer’ in big data processing, pushing technological boundaries by processing complete archives, albeit over relatively small areas. Now, with advanced InSAR algorithms that exploit multi-node cloud computing, combined with the systematic radar data generation and supply that Senintel-1 affords, large-scale processing, and significantly pre-processing of very wide areas is not only practically possible, but already a commercial reality.

Based on the processing of 7,500 Sentinel-1 radar scenes covering 2016 and 2017, TRE ALTAMIRA have produced the first ever double geometry PS-InSAR map of the UK, mapping the nation’s ground stability to an unprecedented accuracy (see Figure 6). By integrating different satellite acquisition modes, motion vectors have been deconvolved to produce two geospatial layers; one of purely vertical motion, the other of just east-west (the satellite is not sensitive to ground motion parallel to its orbital path, which is nearly north-south around the Earth). Measurement points are provided on a regular grid to ease integration with other data.

The map was updated mid-2018 with some improvements, with 2019 being updated quarterly. This is in fact the sixth very wide area product processed by TRE ALTAMIRA and made possible by Sentinel-1, the others being all of France, Denmark, Japan and Italy, plus a large part of California, USA. As mentioned, this data is not suitable for the monitoring of individual structures, but appropriate for wider-area identification of hotspots that might then require closer inspection (see Figures 7 and 8).

This article has given a brief overview of the development of terrestrial InSAR since its pioneering beginnings in the mid 90s to the automatically computed national products that are based on data from truly operational and service-driven satellites. InSAR is not yet a commodity, and potential users still need to be careful who they choose to do their processing, and of course there will always be the demand for more customised InSAR processing, and with higher resolution satellites. Nonetheless, the Copernicus programme has broken new ground by providing some fantastic satellites by which it can be measured.