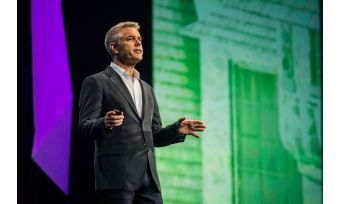 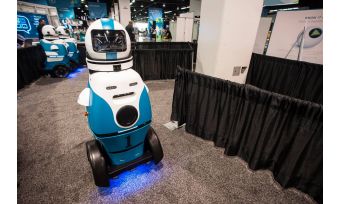 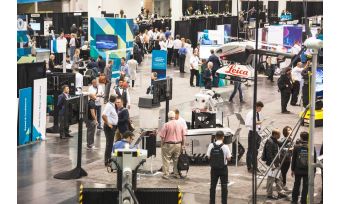 The Anaheim Convention Center near Los Angeles, USA, was the venue for Hexagon’s latest annual user conference: HxGN Live. Over the course of a full week in June 2016, visitors from all over the world came together to learn about the latest developments within the parent company of well-known brands such as Leica and Intergraph.

For several years now, the theme of the HxGN Live conference has been ‘Great stories start here’. This year it was the turn of Hexagon’s CEO Ola Rollén to tell a story in his keynote address: a story that contained ‘data’ and ‘narrative’, which are the two essential ingredients of a good story according to Rollén. They are, coincidentally, also the two ingredients needed to change perception and make informed decisions. Rollén stated that data should not be viewed in isolation, but analysed such that it can lead to a feedback loop for continuous improvement. He illustrated this in a keynote full of movie references, which was quite apt at a conference located so close to Disneyland and Hollywood. The Hexagon CEO outlined how the company’s products can work in unison to deliver data and narrative with a feedback loop in the domains of manufacturing, construction and safety. In one example, for instance, anomalies measured at the end of a car production line may be used to alter the design for upcoming production batches.

In a good fit with the message of the keynote, Hexagon announced a new solution for building information modelling (BIM). BIM is the new paradigm for information sharing and 3D design in the construction industry. Unlike a lot of other software in the BIM realm, Hexagon’s Smart Build product does not focus on 3D design or engineering, but rather on 4D planning of the construction operations from a web-based 3D environment. It is based on the existing software platform in use for industrial plants. The product will help contractors to monitor progress by assigning work packages to staff who can sign off after a piece of work is completed. The feedback loop in this product is visible through the integration of Leica survey equipment for validation and quality control of completed building elements such as concrete slabs.

The Process, Power & Marine division provided a peek into the future with the Smart Helmet from Daqri, which includes various sensors such as an infrared camera and IMU. It is also equipped with an augmented reality visor, like Microsoft’s Holo Lens. 3D models from engineering software could be rendered on this helmet, which would open up huge potential in various applications. Throughout the conference, various survey equipment and software was on display showcasing incremental improvements in well-known categories of hardware and software. Particularly eye-catching was the launch of a little robotic surveillance guard by the company Gamma 2 Robotics. The robot, named RAMSEE, integrates a range of sensors and a friendly digital face. It uses artificial intelligence to autonomously survey and guard indoor environments. The robot can react to unexpected behaviour using sound, speech and light. RAMSEE was introduced at Hexagon’s conference within the framework of a partnership aimed at integrating robot technology in the company’s safety & infrastructure products. The Pegasus Mobile Mapping solution by Leica, in which an all-terrain remote-controlled vehicle was equipped with the Pegasus 2 system, illustrated another application of robot technology. The presentation about this combination showed many potential uses including border protection and scanning of hazardous areas.

The same mobile mapping technology was also on display as part of the Pegasus Stream. This enormous, and admittedly somewhat impractical, construction combines the Pegasus 2 laser scanner with the Ground Penetrating Radar Array from IDS, a company recently bought by Leica. The combination of both technologies enables full 3D mapping of both the surface and subsurface to be performed at the same time. With the combined system, this could be achieved with a single drive, although speed constraints apply due to the maximum measurement frequency of the radar.

Earlier this year Hexagon announced the acquisition of SigmaSpace as provider of single-photon Lidar, which is a rapidly emerging technology for airborne applications. Whereas traditional Lidar systems emit a pulse of laser light and wait for the pulse to be reflected, single-photon Lidar requires just one returning photon for a range measurement. This makes it possible to fly higher and perform more efficient Lidar surveys. Various presentations during the trade show evaluated the use of this technology, such as in forestry applications for instance. Additionally, Hexagon announced that it would rely on single-photon Lidar technology for building an elevation model as part of its content programme.

As a showcase of technology from the Hexagon group and a gathering of geomatics engineers from around the world, HxGN Live 2016 showed how survey, GIS, analytics and artificial intelligence are rapidly integrating into complete solutions. While the realisation of the vision of automated decision-making and feedback loops may still be some years off, the first steps are visible in the technology available today. Innovation will be fast-paced, and so too will the competition. Interesting times lie ahead for the geomatics industry.

Illustration 3, A visitor trying out the Smart Helmet with augmented reality.

Illustration 4, Overview of the exhibition hall.

(All images are courtesy of Hexagon)