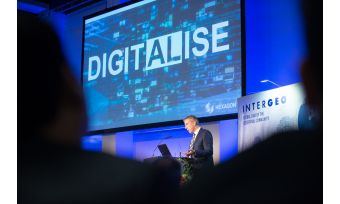 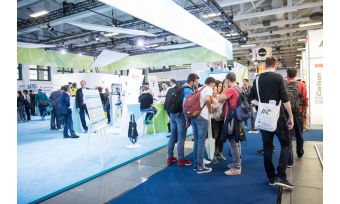 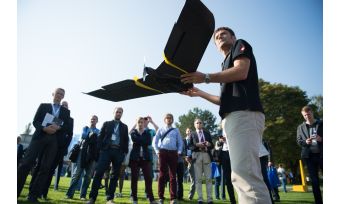 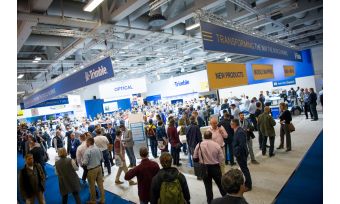 Intergeo 2017, the world’s leading fair and conference on geodesy, geoinformation and land management, recently took place in Berlin and provided an open global environment for the geoinformation community and geomatics technology sector to see the current state of the art and look into the future. In addition to Intergeo’s role as marketplace for the geomatics industry itself, it helps the global sector to position itself in the changing world economy set in a digitalised world.

Compared to the last three Intergeo events, Intergeo 2017 was the first to attract more than 18,000 visitors from 107 countries, with about 1,400 conference delegates participating in parallel sessions of 200 talks and presentations. There were 577 companies from 37 different countries exhibiting, a quarter of these for the first time.

In spite of the variety of communication channels such as internet and social media in a networked-business environment, where access to information is at your fingertips, the expanding Intergeo reflects the growth in the geospatial sector and demonstrates the importance of face to face communication, on site presentations and the (potentially) excellent interlink between trade fair and conference. It should be noted that an increased programme in English would be a big plus. With all its unique characteristics, Intergeo 2017 provided a natural platform for showcases, live interaction, promotion of new products, networking between customers and technology producers, and extending global marketing and reselling networks.

In addition to the main topic of digitalisation, Intergeo 2017 provided the backdrop for exhibiting solutions and presenting applications on a number of topics, including Smart Cities, BIM, Virtual Reality (VR), UAV and smart cartography.

In his keynote address at the plenary session, Klaus Vitt, State Secretary from the German Ministry of the Interior, broadly outlined the use of geospatial open data for public, urban and environmental protection in a digitalised society, placing particular emphasis on the privacy and protection of data. In his keynote speech, Dr Jürgen Dold, president, Hexagon Geosystems (see photo), described digitalisation by making an analogy with Paul Simon’s song 'You Can Call Me Al', where he compared the two most well-known words and their misinterpreted meanings – 'digitising' and 'digitalisation' – with the misunderstandings in the song. He connected the concepts of creating a model of the real world in a digitAL frame to make better, intelligent decisions about the world and how digitALisation would contribute to the construction sector from the point of view of productivity and cost saving.

As the geospatial sector has been engaged in various forms of innovation for years, the characteristic of Intergeo 2017 was the effort to adapt to the new requirements of a digitalised world. The innovative geo-technologies at the trade fair and the presentations, which provided a concise summary of best practices at the conference, have shown that the sector is in transition from the phase of providing solutions with tightly integrated-systems of hardware and software to a phase of collaboration and sharing in understanding, monitoring and managing the multifaceted problems of today’s society from security to the digitalised administration of urban areas, and from autonomous navigation to the smart sensor web.

Germany’s new open data programme and the first open data products in the OpenStreetMap format, as well as generalised data from cadastre (ALKIS) to topographic (ATKIS) models, were presented by BKG (the Federal Agency for Cartography and Geodesy) and AdV (Working Committee of the Surveying Authorities of the Länder). BGIC (Bundeswehr Geoinformation Centre) introduced a fully equipped battlefield mobile mapping vehicle with multiple sensors, including laser scanning and imagery capture, to support soldiers in real-time and a 3D model of the battlefield. German SDI (GDI-DE) presented a new administration team to strengthen the initiatives of INSPIRE, UN-GGIM and GSDI with registry, geoportal, and metadata services, and interface to geodata services. The Copernicus Program of the European Commission and partner companies introduced the wide use of free satellite data services comprising multispectral imagery and radar for the purpose of environmental protection, agriculture and security.

Virtual Reality (VR) is becoming a new media for visual communication, measurement and design in the geomatics sector, although it has been used in the gaming and filming industry for a long time. With the enabling laser scanning technology, mobile mapping or 3D point clouds from any source, a properly prepared 3D model may leverage VR and AR (Augmented Reality) as a new form of visual language and permit interaction between the real world and a digital model allowing robotic access to environments of interest. VR systems attracted many visitors from different backgrounds and were presented by various companies such as UVM and Leica Geosystems. The well-established geo-technology sector with its legislative limitations and precise standards, and surveyors with their traditional way of working, will ultimately need to put further effort into changing and transforming the surveyor’s working environment into a 3D digital twin of the real world.

The increase in the number of geo-solutions for BIM and smart cities by geoinformation sector leaders such as Esri, Autodesk, Bentley (Microstation), and Pitney Bowes (Mapinfo), with their core solutions and more sector-oriented solutions from their partners and resellers, proves that the market for BIM and Smart Cities is increasing as well. Many professionals and companies interested in the business digitalisation of urban modelling visited the booths of the companies providing these services.

Geomatics for Other Sectors: Construction, Transportation, Mining and Agriculture

Geospatial technology has been traditionally helping urban management, land management, and utilities with fit-for-purpose solutions. In recent years, many of the companies in the geo-technology sector have been providing new technological capabilities with their new cost-cutting solutions and services that promise a wave of productivity improvements for sectors including construction, transportation, mining and agriculture. Intergeo 2017 witnessed an increasing number of mature solutions and products which create value for these four sectors. Following the proven success of the pioneers in the market, there are now new players attempting to take a share of the market. In this respect, Intergeo 2017 hosted first-time exhibitors from Asia to support construction surveying with a particular focus on survey equipment and hardware.

Transition in the UAV Sector

This year, more than a quarter of the exhibitors were directly or indirectly providing OEM, products or services demonstrating maturity of drone operations. The exhibitors and talks at the conference focussed on  particular problems by using almost standardised sensors, and methodology with some examples of best practices such as continuous calculation and monitoring of stock piles from successive DEMs in mines; inspecting infrastructures; and monitoring vegetation growth by means of a vegetation index from multi-spectral sensors.

Many companies, including Cloudeo, GAF, Luciad and Harris exhibited their SaaS (software as a service) for the purposes of agriculture, location-based services, traffic, soil moisture, and water masks through their portal.

An increasing number of companies from Asia, along with German and Central European companies, are engaged in the business of providing surveying equipment, OEM parts, multispectral sensors, and 360-degree cameras. In contrast to previous Intergeo exhibitions, there were more service companies using software development kits (SDKs) or OEM technologies (both software and hardware) to facilitate the infrastructure of smart cities and to provide services in conventional fields such as data capture, (aerial) mapping, image processing and all areas of surveying.  The number of software solutions of structure from motion based UAV photogrammetry slightly exceeded conventional photogrammetry software for 3D modelling and data capture.

Integrated survey systems composed of multiple sensors such as rail-track survey systems and road surface monitoring systems have been familiar products at Intergeo for some years. Now radar-based systems such as ground penetration radar (GPR), which supports reverse-engineering for utility networks such as gas and water pipelines, and terrestrial InSAR (Interferometric Synthetic Aperture Radar), a technology for deformation, subsidence and displacement monitoring, were exhibited at Intergeo 2017 by Leica Geosystems and MetaSensing respectively. Multi-constellation laser scanners on trolleys, backpacked, handheld and mounted on different platforms were supplied by many producers to survey difficult areas. There was no change in indoor navigation methods, other than visual, but there was a decreasing number of exhibitors of OEM products for GNSS and INS.

On the second day of the event, there was a visible – and encouraging! – increase in the number of young professionals visiting the booths to explore the technology, attending presentations on new products and solutions and making contact with companies.

The highly dynamic geomatics sector will be present at Intergeo 2018 in Frankfurt, Germany from 16-18 October, with innovative new ideas and technologies as well as mature products.  On the evidence of Integeo 2017 the future looks particularly bright for VR, BIM, digitalised urban management, geo-technology solutions for autonomous car navigation, and the operation of multi-drone flights with intelligent collision avoidance.

Intergeo, Students and the Geoinformation Chain