An Information System for an Integral Approach to Land Management 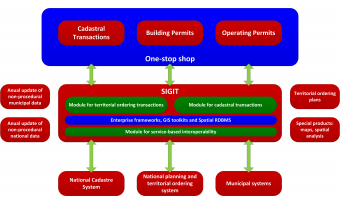 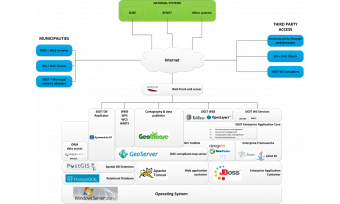 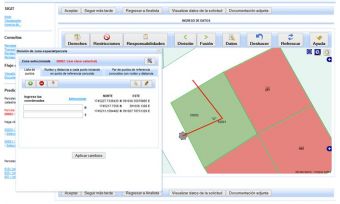 A pilot implementation for municipal information infrastructure in four municipalities (Puerto Cortes, Omoa and Tela in Honduras and Puerto Barrios in Guatemala) set out to test improved management of geographic information, known as the GIT (Gestión Integral de Tierras or ‘Integrated Land Management’) project. Data is now published on the internet for online access by citizens, a one-stop shop has been introduced, and integration of data at different levels avoids data duplication. One very important consequence of improved access has been increased trust through more transparency.

The complex situation in legislation in Honduras has meant that a consistent and complete registration has been difficult to achieve. Since it is unclear to citizens where to go in case of land transactions, there are many informalities related to ownership. The government recognised the complexities, and legislation was modernised about 10 years ago. The new law is currently under implementation, which is a slow process. The new legislation establishes the integration of fiscal and legal cadastre. Additionally, the legislation arranges the possibility for local governments to become associates in maintaining the cadastral data at national level, by integrating their local data with the central database. The NPI uses a central information system called SURE (‘Sistema Unificado de Registros’ meaning Unfied Register System) for land administration data. The legislation for land use plans has also been modernised defining strict procedures for the design and elaboration of these plans by the municipalities.

In Guatemala, the situation is different and has a more centralised approach. The National Cadastre is responsible for the cadastral registration while for the land registry there is a separate institution, the Read Estate Registers. The municipalities are not an official player in the maintenance of land records and cadastral maps, although they have their own cadastral database for taxation purposes. Land use plans and regulations are directed by the Secretary General for Planning.

This environment has been the basis for the GIT project. One the one hand, it focuses on the acquisition of cadastral data and the elaboration of land use plans as a fundamental basis for the land management, and on the other on decentralisation of the maintenance of this data by municipalities to augment the sustainability of the maintenance of the data and to promote the integration of its use at local level. New work procedures have been defined and implemented, and the information system SIGIT (Sistema de Información Gestion Integral de Tierras) has been designed, developed and implemented supporting these concepts.

The design and implementation of the municipal infrastructure for the management of land administration data in the municipalities has been based on the concepts of integral local maintenance and use of the land tenure and land use data, utilising existing information systems and bridging the gap between them. Therefore SIGIT has the following objectives (see Figure 1):

Apart from forming the basis for sustainable land transactions and land use planning, the SIGIT can be supportive in a situation where all citizens in a municipality pay land tax and where land possession can be converted to legal land ownership. This will be based on an up-to-date and complete dataset in a transparent environment.

SIGIT functions as follows: customers can go to the municipality with their application forms, which may include the survey sketch in the case of a subdivision. From SIGIT, a Cadastral Certificate will be provided on paper. The customer takes the certificate, the deed and (if needed) the survey sketch to the NPI. The municipality also sends the data digitally from SIGIT to SURE. Then NPI can compare both datasets (from customer and from SURE). A transaction is done in SURE and the municipality is informed once the transaction has been approved in SURE (approval at NPI office).

SIGIT operates as a one-stop shop on the municipal side. The design of SIGIT is based upon the Land Administration Domain Model ISO 19152 to manage the cadastre and land use planning data from this point of view. The LADM provides an extensible basis for the development and refinement of efficient and effective  administration systems. The organisation of the LADM allows for implementation in a distributed environment. The LADM could be used for design of the system, deciding which information will be managed by whom and who is ‘owner’ of the data. Because the LADM provides an overview of all relevant data for land administration, the model proved to be very useful in design discussions. The LADM contains legal/administrative attributes on parties and rights, geometric attributes and survey data. The LADM includes documentation such as field documents, deeds, transaction documents, imagery, etc.

To meet the requirements, additions to the LADM were designed. The LADM additions to implement SIGIT in Honduras and Guatemala were necessary to store extra attributes about spatial zones, parcels and buildings as required by the municipalities during development. Furthermore, the information regarding building and operation permits, with their respective user-defined spatial and administrative rules, were out of the LADM scope, which made the corresponding additions necessary.

The SIGIT system has been developed in a multi-user and business process-oriented way with history and transaction support and with a 100% web user interface with international language support and open source technology programmed in. The technologies used are shown in Figure 2. The LADM was implemented using object-relational mapping technology called ‘Hibernate’, using mostly Java EE standard JPA annotations. A Hibernate extension called ‘Hibernate Spatial’ was used to support handling of spatial data. During SIGIT development, one important goal was to make it self-contained in the sense that no additional or external application was strictly necessary to perform topological operations and calculations using spatial data, so that it entailed no extra costs for deploying and learning how to use external tools. Figure 3 shows a parcel dismemberment operation by drawing a border to obtain the two new parcels – all within the web interface. Historical data support is paramount within SIGIT; it is always possible to track changes since the beginning. Furthermore, no data can be altered outside the confines of a transaction.

SIGIT has been implemented at local level and specific procedures have been elaborated between the NPI and the municipalities to define how cadastral transactions are executed in a decentralised way – in a one-stop shop environment. For transactions relating to building permits and operation permits, similar procedures have been developed and implemented. Web services are used to manage the transfer of transactional data between local and central information systems or between different local information systems.

Generally speaking, we believe that the use of the LADM as the foundation for SIGIT’s data model represents a measurable step forward in the design of serious land management systems for the future.

The authors thank the European Commission’s Agency Europe Aid for granting financial aid within the framework of the URB-AL III programme for the ‘Integral Land Management’ project in Puerto Barrios, Guatemala, and in Omoa, Puerto Cortés and Tela in Honduras (the GIT project).

Jan Koers obtained an MSc degree in GIS in 2001. He has worked in local government administrations and in the private sector in The Netherlands and in an international consultancy role for Kadaster International in Central and South America. He specialises in project management, the design and implementation of geographic information systems, and information management in land administration and cadastre, topographic map production, development planning, urban and rural planning, spatial analysis, geostatistics and integral municipal management.

Rodimiro Cerrato Espinal holds an MSc in computer science from University of Minnesota, USA. He has extensive experience in enterprise application software development in several programming languages on many platforms. He is an expert in spatial data management and the architect of the Integrated Land Management System (SIGIT) in Honduras. He is designer and developer of a system enabling on-the-fly advanced promotion deployments accessible through SMS codes to cellular subscribers.

Handing over the Presidency
Latest article