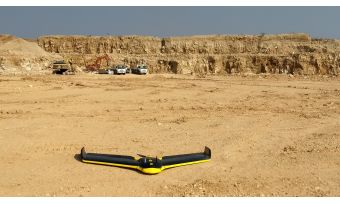 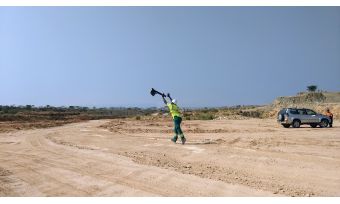 LafargeHolcim Tanzania is situated in Mbeya, Tanzania, close to the border of northern Malawi, Burundi, and the DRC. The operation includes both a cement plant and nearby limestone quarry. The cement that the plant produces is sold to a broad range of clients, both within and outside Tanzania. Among the challenges are slow, expensive stockpile surveys, varied accuracy of volumetric calculations and sub-optimal blast planning.

(This article is brought to you by senseFly)

At LafargeHolcim Tanzania, stockpile surveys in the past were an infrequent, solely terrestrial affair whereby an external surveyor would be employed—typically every three months—to measure the site’s numerous material stockpiles.

We would bring surveyors into the country … this work would take two days and cost approximately US$5,000 each time

According to LafargeHolcim Tanzania’s plant manager, Hossam Elzohery, this work was both slow, expensive and, at times, not as accurate as required. “Before we used drones we spent a lot of money on our surveys,” Elzohery says. “We needed to bring surveyors in, sometimes from outside the country. This work would then take two full days, cost approximately $5,000 each time, and we would still sometimes notice errors.”

Elzohery and his team were therefore interested in exploring alternatives, the goal being to identify a more time-efficient, lower cost and consistently accurate method of measuring and managing the plant’s inventory.

The answer, says Elzohery, came from within LafargeHolcim: “We started to look at senseFly drones in 2016 after other LafargeHolcim plants, like the one in Nigeria, started to use the technology. We saw that the UAVs brought a lot of value to their operations, so that’s where the idea started to evolve.”

In addition to potentially improving the plant’s inventory management, Hossam says further UAV applications became clear as his team looked more deeply into a possible drone purchase. “We saw that the drone could give us a clear digital history of the site, via good quality pictures, which we could trace over time—in terms of what material we have, where we should move this and so on. We also saw possible uses for the drone at our limestone quarry, where we have to produce a very precise mining plan to guide our blasting. We also have to make an accurate rehabilitation plan, and all this work could be improved with more accurate maps.”

After speaking with the relevant UAV teams at other country sites, Elzohery and his team purchased two senseFly eBee drones in early 2017 (the second unit to ensure redundancy). These automated mapping UAVs were supplied with senseFly’s eMotion flight planning and data management software, and Pix4Dmapper photogrammetry software with which to create digital outputs such as point clouds (within which stockpiles could be measured), digital surface models and 2D orthomosaic maps.

“We now use the drone to manage 14, or sometimes 15, stockpiles of different materials, like limestone, klinker, gypsum and clay, which we measure with the drone at the end of each month,” explains quarry geologist Paul Mandatta.

We fly once over the plant at 120 metres above ground level. This takes about half an hour

The mapping process is simple, Mandatta says. “After confirming our flight timings with Songwe airport, which is less than 5 km away, we fly once over the plant at 120 metres. This takes about half an hour. From there, we process the flight’s 320 images in Pix4D, produce our point cloud, click around the stockpiles on-screen to define their edges and then click to compute our stockpile measurements.”

The team then applies a specific formula to each stockpile volume, relevant to the material in question, in order to calculate its total tonnage. “That whole process takes less than a day,” Mandatta explains, “including the image processing. This gives us our balance, or opening stock, for the next month, and it allows us to calculate how much of our raw materials we have consumed within the past month.”


The drone’s digital deliverables are also valuable when planning new stockpile locations, adds Mandatta: “When we need to reposition our stockpiles for example, we’ll sometimes fly the site to measure, in the point cloud, the surface areas of different free areas of the plant.”

As for the plant’s nearby quarry operations, Mandatta explains that the key drone application to date has been optimising blast activities: “We survey the quarry with the drone and use this data to create a contour map. We then overlay this with the quarry’s block model. This helps us to better understand the site and more easily identify which portions contain very high-grade limestone, and which contain lower grade stone, for mixing. We are also planning to start operations at a coal mine we own further North, so we plan to use the drone there also.” In the dry season Mandatta says he will also produce a full digital terrain model of quarry to check exactly where rocks are exposed. “This will help us to identify the site’s different types of rock,” he explains.

The team’s eBee is even contributing to the company’s community relations activities. “We are using the drone to identify and geo-locate the various farming activities around our plant,” Elzohery says. “We provide unused parcels of land to local farmers, so having an accurate map of the wider site will help us to accurately manage this land and define the boundaries of different farming plots. We’ll know exactly who’s who and where.”

From an efficiency standpoint, the plant’s stockpile surveys are now completed twice as quickly as before. Using theodolites and total stations our contractor’s surveys took almost two days. This work was also quite unsafe, because it needed staff to climb all of these stockpiles. But now, with the drone, it’s easy, it’s safe, it’s usually done in a day and we get very high accuracy,” Mandatta says.

The two drones effectively payed for themselves in four months

The firm’s UAV approach is also more cost-efficient than previous ground work. This fact has led to the team surveying its stockpiles more frequently, further improving its inventory management. “The target, of course, for any investment that you turn, is to break-even as quickly as possible,” Elzohery explains. “Previously, our external contractor would cost us five thousand dollars to survey our stockpiles once every three months. Now we are flying the drone over the plant each month, which means, compared the price of surveying terrestrially every month, our two drones effectively payed for themselves in four months.”

To learn more about senseFly, go to www.sensefly.com.