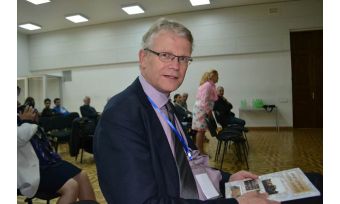 Menno-Jan Kraak is the newly elected president of the International Cartographic Association (ICA). Cartographer Kraak is a professor in Geovisual Analytics and Cartography at the University of Twente, ITC in The Netherlands, and is a long-standing and active member of the organisation he now heads up. Over the next four years, Kraak will shape the policy of the ICA, striving to make further progress on the steps taken by his predecessor Georg Gartner while naturally also introducing some ideas of his own. His goal is to make the world a better place through maps. He recently shared his thoughts with GIM International.

You’ve just become the new president of ICA. What are your goals?

I’ve got four main focal points for my period as president. First of all, the map! We covered that with the ‘Year of the Map’, of course, in which the map plays a central role. Secondly and thirdly, our internal and external relationships. Internally, we have quite a ‘bottom-up’ organisation; all working groups are initiated by members, and the work has to be done by them as well. I would like to see how we can make that process work even better. The same goes for external relationships; we have immensely increased our commitment in the last few years, especially through the Joint Board of Geospatial Societies but also through UN-GGIM, which has recognised and endorsed our International Map Year. That puts a responsibility on our shoulders. The fourth area of focus is membership. We have around 70 members – i.e. national organisations – but the potential is 200, so there’s plenty of scope to expand our number of members.

What’s the main benefit for new members? Why should they join?

Most importantly, membership provides them with a gateway to ICA’s global network. There’s a lot of information exchange between members and possibilities to work together and learn from each other. Basically they are gaining access to knowledge within the association. I know that is difficult to measure, which is why it’s often hard to convince member states or national organisations to become members. By the way, a lot of that knowledge is provided to students or young researchers, for instance, in the form of a grant or a reimbursement for visiting a conference. Such benefits are of course very easy to measure.

Do you see a changing role for learned societies like ICA?

Well, just as membership no longer goes without saying nowadays, as an association you should always keep an open mind about your own role. But I still believe that if you want to promote your profession, coming together in real life is most effective. Even virtual contact via Skype or other tools doesn’t work half as well. The ‘platform role’ of ICA remains a very important aspect, enabling people – from many different backgrounds but all united by an interest in the cartography profession – to come together. From commissions and working groups to conferences and congresses, attendance can vary from a few dozen to thousands.

What was your main motivation behind taking on this role?

My love for the profession! I’ve been active in ICA for such a long time. I’ve acted as vice-chair and chair in several commissions and I was vice-president for eight years. My professional life has been intertwined with the association, so I guess this was a logical step. But I must stress that it’s also a great honour!

What are the biggest changes in GIScience and cartography right now?

That’s a difficult one… story mapping is very much a hot topic these days and the newest GIS techniques are perfect for portraying a story in a map. However, in the early days of my career, and even before that, a map was published in a booklet or atlas including a small text explaining the map. In my view, that was the same as story mapping. Today’s IT tools are making it easier, fancier and more accessible for everybody, but the concept of story mapping, i.e. telling a story through a map, has been around for many years. I don’t see any Nobel Prize-winning discoveries, but what is gradually changing is the individualisation and personification of maps on the one hand and how the individual responds to the map on the other.

In GIM International we keep highlighting the fact that 75% of land-citizen relationships are not documented. Is that another hot topic in your world?

To be honest, when it comes to the art of making maps, a cadastral map is not the most challenging job for a cartographer and none of our commissions are covering that right now. The United Nations’ Sustainable Development Goals take the relationships between citizens and the Earth a little further, and I believe that maps as outputs of data can make a difference in that respect.

How do you envisage the role of the ‘modern-day’ cartographer?

One of the most important characteristics of a modern-day cartographer is the ability to listen to, and to be in touch with, the user of the map in order to establish a user-centred design. The modern-day cartographer needs to ask – and receive answers to – questions like: What does this user want? Which question does the map need to answer? Which story must it tell? And the cartographer must then be able to translate those questions and answers into the right map. Another important thing is to analyse data quickly to find out whether the data contains the answers.

Your presidency starts in the International Year of the Map. What is the main goal of this themed year?

We want to create awareness about maps. We’re doing that via UN-GGIM and hence all our sister organisations like FIG, ISPRS and GSDI will see a lot of maps and explanations of what maps can do for them. We’ve launched a dedicated website where projects and organisations can present their work. We’ve written a book on maps, titled The World of Maps which has already been downloaded more than 15,000 times so I believe we are succeeding in creating more awareness.

What other projects is ICA working on?

We are planning to support the UN in their efforts to achieve the new sustainability goals, by sharing best practices of how maps can help them provide insight into the goals and monitor the world’s progress. We’ve also launched a new journal with publishing company Taylor and Francis, called the International Journal of Cartography, and we have become a member of the International Council for Science (http://www.icsu.org). We are involved in a lot of OpenGeo activities and also with Maps4All. All our commissions are very ‘alive and kicking’. A lot of those things were all in place when I came; I’ve inherited a very healthy and active organisation so credit is due to our former president and my predecessor Georg Gartner who did a great job!

What message do you want to share with our readers?

A map can help you solve a lot of problems: from ‘How to get from A to B’ to ‘How can I reduce poverty?’. First of all I want to create awareness among professionals and map users about the problem-solving ability of maps in particular and the field of cartography in general. I’ve even tried to coin a catchphrase: ‘Let’s make the world a better place with maps’.

Menno-Jan Kraak was elected president of the International Cartographic Association at the ICA Congress in Rio de Janeiro, Brazil, in August 2015. Kraak graduated cum laude from the Faculty of Geographical Sciences, Utrecht University, in 1981. He obtained a PhD degree in Cartography from Delft University of Technology in 1988 and, after a career at the Faculty of Geodesy, Delft University of Technology he joined the University of Twente/ITC as a professor of Geovisual Analytics and Cartography in 1996. Currently he is principle investigator for the ITC research programme Spatio-Temporal Analytics, Maps and Processing (STAMP) and member of the Twente Graduate School. He has been board member and president of the Netherlands Cartographic Society and of the Society Geo-Information Netherlands (GIN). He has been active in the International Cartographic Association as vice-president and as national delegate and has been (co-)chair of the Commission on Visualisation and Virtual Environments. Menno-Jan Kraak has worked as (co-)author on more than 200 publications related to cartography and GIS, including writing several books and serving as editor of various cartographic journals.

Against the ‘How to Lie with Data’ Classification