There is an urgent need for the administration of property and land use rights worldwide as the basis for social and economic growth. Notwithstanding the enormous investments by governments and international organisations in the development of such systems over the past decades, it is still estimated that, from a global perspective, 75% of the relations between people and their land are not documented. So which methods and techniques can be used to develop land administration systems for all, and within our generation? Light mobile collection tools may offer a solution, as presented in this proof of concept from Colombia.

The challenges in Colombia are extremely complex. The armed conflict, rooted in disputes over land, has an enormous human, social and economic impact. According to the UHNCR it has resulted in more than 5.7 million people being internally displaced, making Colombia the country with the highest number of internally displaced persons in the world. Another challenge is the informality of property in the rural areas of Colombia, with approximately 4 million rural parcels not formally registered.

The responsibilities for the formalisation of land rights for rural areas and the administration of those rights are distributed between several organisations. The Colombian Ministry of Agriculture and Rural Development is responsible for the process of formalisation of rural properties. The Geographical Institute ‘Agustín Codazzi’ (IGAC) is, amongst others, responsible for the National Cadastre of Colombia and therefore includes the results of the formalisation into the cadastral map. The Register of the Notaries, the ‘Superintendencia de Notariado y Registro’ (SNR), maintains the formal deed register. According to the Ministry of Agriculture and Rural Development, there are approximately 1.7 million unregistered rural parcels. Another 1.8 million rural parcels are currently registered in the National Cadastre (under IGAC), but without the accompanying registration by the notaries. The Ministry wants to accelerate the formalisation process in rural areas, which is seen as a prerequisite to stimulate agrarian production and to combat poverty in rural areas. It should be noted that several other urban cadastres exist, such as the cadastre of main cities like Bogota, Medellin and Cali.

For the cadastral maps of the rural areas, a centimetre-level representation of boundary vertexes is required, derived from very accurate field surveys. This high accuracy is based on well-defined standardised cadastral mapping approaches and is, for this reason, necessary even for remote rural areas. This demand is linked to time-consuming, costly and cumbersome processes and is perhaps characteristic of the disappointing results in land administration worldwide. It will take many decades and require substantial investments before the task can be finalised in this way. The Ministry of Agriculture, the Register of the Notaries and IGAC are therefore exploring alternative approaches, such as fit-for-purpose land administration.

In a fit-for-purpose approach, boundaries of parcels are identified in the field and drawn on plots of orthophotos using locally trained technicians. The approach is highly participatory. It has previously been implemented in countries such as Rwanda, Kyrgyzstan, Ethiopia, Lesotho and in some Eastern European countries. After the boundaries have been drawn, a preliminary identifier of the spatial unit (parcel) is drawn on the photo and provided to the claimant on a small piece of paper. The claimant gives this piece of paper to the person responsible for recording the administrative attributes. Surveys are only needed for data completion if the boundaries are not visible on the orthophotos. The fieldwork is paper-based and is a proven approach. Collected data can be digitised back in the office. The approach is creating scalable land administration solutions, and meets the societal needs of today.

The Ministry of Agriculture and Rural Development in Colombia has experience with this paper-based fieldwork (Figure 1) and, along with the other land administration institutions, is very interested in a computerised version of this process. Lightweight devices in the field are very efficient to use in mountainous Colombia, and the tools and technologies to develop the application are available.

The fit-for-purpose smartphone app enables farmers and grassroot surveyors to walk the perimeters of properties themselves. Those grassroot surveyors are young adults from the villages, trusted by the communities and educated and guided by professionals. The freely downloadable app comes with an orthophoto of the specific area, and the spatial and administrative information can easily be collected in the field based on a standard data model. The data is collected only once; the spatial and administrative details of one property are integrated right from the start of the formalisation process and are interoperable. All data can be collected offline and is later transparently uploaded in the cloud. At a village meeting in the town hall, the community members gather to view all the collected data on a map and discuss and reconcile the results.

During the adjudication process in the field, disputes may lead to the creation of overlaps between polygons. In that case, those overlaps are mapped and the related conflicts have to be solved. Bigger ‘gaps’ represent areas to be surveyed. This may concern government-owned lands which have to be identified and included in the system.

The design environment in this case is based on Esri’s Collector App, which allows for very efficient data collection. The app was used in combination with the Trimble R1, for sub-metre accuracy, via a Bluetooth connection. The interface between the R1 and the Collector App could be managed from a smartphone (Figure 2). This configuration is fit for purpose, given the often rather low value of rural land, the intrinsic accuracy of boundaries and even the existing norms for area calculation. The data structure of the cloud-based database with collected attributes is based on the Land Administration Domain Model, a flexible ISO standard that is widely applicable in land administration. It includes the Social Tenure Domain Model, which provides the concept for the app. 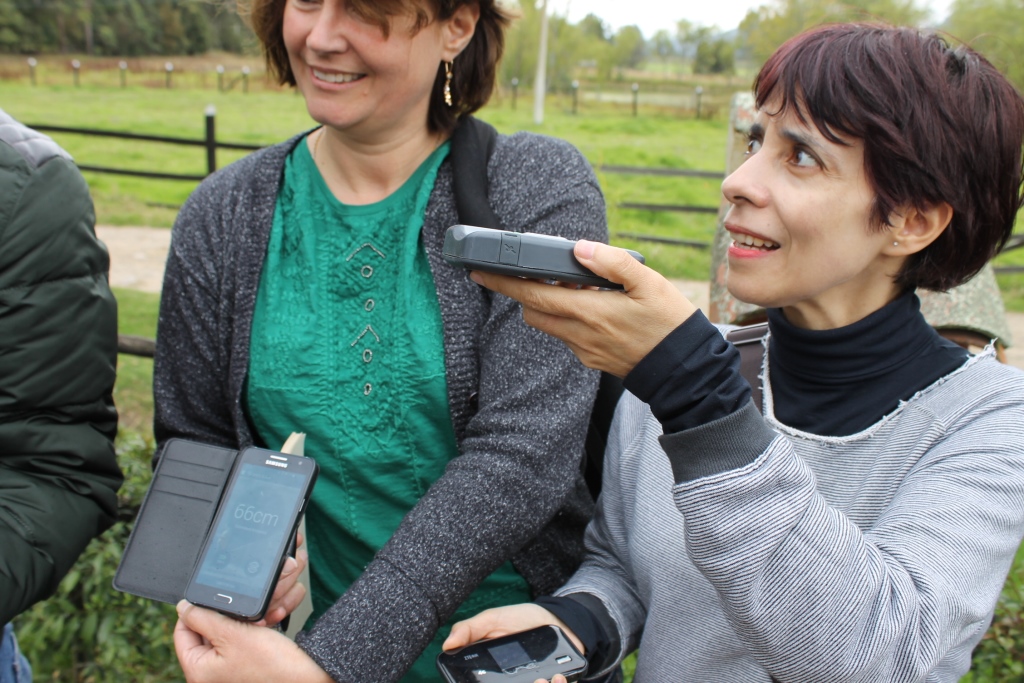 Trimble R1 with Bluetooth connection with a smartphone

Polygon-based rather than boundary-based

The data collection method is ‘polygon-based’ rather than ‘boundary-based’ (Figure 3). The collected polygons with associated attributes are considered to be ‘evidence from the field’. Data collected from the field can be processed and handled in a (cloud-based) geographic information system (GIS), where the collected polygons can be superimposed onto the imagery. Between the polygons, the boundaries will be visible as objects in most cases: fences, hedges, trees, ditches, roads, etc. If those visible objects are not spatial units in themselves, the boundaries can easily be vectorised today and in the future it may be possible to conduct automatic feature extraction. Topology can be introduced if needed.

Imagery is loaded in advance. Most boundaries are clearly visible on aerial photos or on satellite imagery. This imagery should be ‘ready to go’, with proper cache levels, scales, formats, etc. The imagery needs to be cached so it can be used as a base map or a ‘layer’ to facilitate very close zooming. Then physical features can be picked out of the imagery, such as fences, hedgerows, large stones, walls, ditches, etc. The polygons or tracks can be recorded with the R1 or with standard smartphone GPS. Tracks can be visualised by superimposition over the aerial photo. This allows identification of the visual boundaries.

Community involvement is required; the very nature of cadastral survey requires the participation of neighbours, family members, etc. Therefore, the mayor is informed in advance to ensure awareness and involvement of all parties. Everyone can follow the process on-site in the field. Collected data can be sent with Esri’s Collector App directly to a cloud-based GIS environment (Figure 4), enabling everyone to follow the process remotely – this is important for the involvement of stakeholders who cannot be on site – and it is possible to set up transparent access to this cloud environment. Usual procedures, such as public inspections, are conducted at village meetings in the town hall accompanied by trusted third parties.

All citizens in Colombia have a unique ID number and this ID can be coupled to the app, which has the functionality to link names to polygons (perimeters). This means that names and other relevant attributes and observations can be linked. Digital photos can be attached; existing documents like passports and IDs, selfies, photos of groups of owners, photos of existing legal documents like deeds or titles and photos of the boundaries can all be linked to the polygon.

Inconsistencies can be avoided when all attributes are collected only once and correctly, with verification options. This avoids situations such as spelling issues, for example, in which the same person is recorded with several different names in the administrative data causing an enormous bottleneck in land administration procedures.

Data collection should be fast, reliable and cheap (i.e. grassroot surveyors can do the job). It is expected that this app for field data collection will speed up and improve the formalisation process. The app should support acquisition of spatial data and administrative data in an integrated approach. If only handheld devices are being used (i.e. no survey equipment is needed), the work can be done in very efficiently.

The proof of concept has been much debated and well received in several forums, both inside and outside Colombia, and the results are promising. The following should be noted in this context: currently, it costs around USD1,000 to measure and register an average two-hectare parcel in Colombia. With millions of parcels still to formalise, fit-for-purpose methods and techniques should be explored, tested and implemented as soon as possible.

The authors wish to thank Esri and Trimble for their crucial support. The work would not have been possible without the support of IGAC, the Ministry of Agriculture and Rural Development, SNR, the Dutch Embassy in Bogotá and the Netherlands Enterprise Agency.

A PDF of the article can be downloaded here.

Biography of the authors

Mathilde Molendijk works as a manager at Kadaster International, The Netherlands. She focusses on land administration in the region of Latin America and the Caribbean. Previously she worked as a programme manager – responsible for the coordination of international MSc programmes – at VU University, Amsterdam, The Netherlands.

Dr Javier Morales is assistant professor in the Geo-Information Processing department of the faculty of Geo-Information Science and Earth Observation (ITC) at the University of Twente, The Netherlands. Previously he worked as an advisor to the general director at the Instituto Geográfico Agustín Codazzi (IGAC), Bogotá, Colombia.

Dr Christiaan Lemmen is geodetic advisor at Kadaster International and visiting researcher in the Urban and Region Planning and Geo-Information Management department of the Faculty of Geo-Information Science and Earth Observation (ITC), University of Twente, The Netherlands. He is chair of FIG’s Working Group Fit-For-Purpose Land Administration.

Receive a weekly summary of the biggest news, along with the best stories, case studies, and key market insights.