IBM Shows a Mainstream Direction for Spatial IT 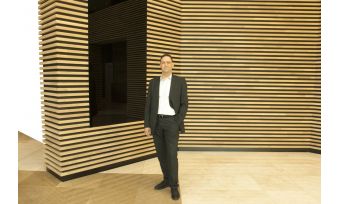 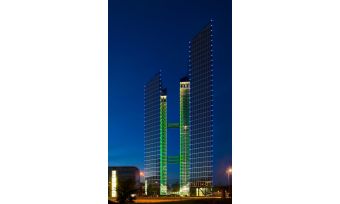 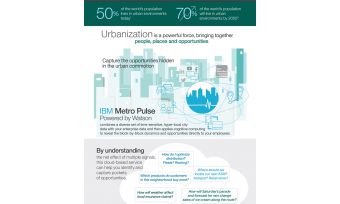 Now that some of the core infrastructure challenges have been solved, the application layer of big data is rapidly building up. Therefore, the major GIS players have recently been focusing their attention on their added 'intelligence' value. The geomatics and GIS sector will benefit greatly from the innovation brought by big data companies like IBM, so how does IBM see its future in this regard?

The combination of Big Data with artificial intelligence, hybrid cloud, security, Internet of Things, etc., has already brought IBM USD33 billion in revenue, and next year it will probably be USD40 billion. 'Spatial intelligence' in the context of Big Data means a new era. The data volumes are enormous, of very heterogeneous sources, a combination of structured and unstructured data, and (almost) real-time analytics and distribution are demanded. Big Data gives a boost to the geomatics and GIS sector. The leading actors in this play are the IT companies, like IBM, who are the real masters in Big Data and cognitive analysis. Geodata and GIS functionality are inside many of their solutions – under the hood – to get a view on the 'where' in the issues they are helping to solve. Still, IBM has no special organisational entity for the spatial component. In 2016, IBM took over 15 companies, adding to their capabilities in the high-growth areas of cognitive, cloud and security. So are they looking to buy a GIS company too? When we asked Christophe De Melio, Executive Analytics Architect, in an IBM Center of Excellence, he responded with only a smile.

The history is short. Big Data is, basically, enterprise technology in the back office: databases, analytics, etc. It started with the large internet companies (Google, Yahoo, Facebook, Twitter, etc), which were faced with unprecedented volumes of data, and had no infrastructure to profit from them. They started building Big Data technologies. The ethos of open source was rapidly accelerating and a lot of those new technologies were shared with the broader world. The demand grew. Big Data success proved not to be about implementing one piece of technology, but required the entire company to commit to building a data-driven culture. Over time, the more forward-thinking large companies such as banks, crime-fighters, airlines and telecom firms, started experimentation with Big Data technologies. A lot of the infrastructural work has now been done, and the phase where applications are deployed on top of the core architecture is starting. The Big Data firms offer more mature products, including the tech giants - Amazon, Google and IBM in particular. The trend in Big Data analytics is the focus on Artificial Intelligence (AI) to help analyse huge amounts of data and derive predictive insights. The algorithms behind deep learning can now be applied to massive amounts of data cheaply and quickly. Increasingly, machine intelligence is assisting data scientists: just by crunching the data, emerging products can extract mathematical formulas or automatically build the data science model that is most likely to yield the best results. Big productivity gains are the result, also from the real-time intelligence capabilities. Many of those applications are (partly) in the cloud; customers can leverage Big Data without having to deploy underlying Big Data technologies in their data centres. “Within the new solutions, geodata and geographic analyses are ubiquitous. Location data is one of the most interesting data types for various industries,” says Christophe De Melio. That means that not only the GIS sector but also the photogrammetry sector is heading for new markets where data from diverse image sources is used to identify changes in scenes and patterns by cognitive systems. Images, more and more from sensors from the Internet of Things, drones and satellites are now being evaluated in automated processes with the utmost precision at near-real-time speed.

IBM is now a global cloud platform and cognitive solutions company, which has continually evolved over the past century to remain at the forefront of technological innovation. Last year, USD6 billion went into R&D and 8,000 patents were granted. “The mission is to help organisations unlock new insights and usher in a new era of cognitive business,” De Melio points out. Cognitive computing or Artificial Intelligence represents a new class of systems. Rather than being explicitly programmed, they learn (to reason) from their interactions with people and from their experiences with their environment. “Cognitive systems can make sense of the 80 percent of the world’s data that computer scientists call unstructured, to provide more context and details on the data and define trends in a more automatic way.” Over the last five years IBM invested heavily in integration of (secure) cloud computing, big data and cognitive analysis. Now these contribute USD33 billion or 41 percent of the annual revenue. It is expected to be USD40 billion next year. The central stage is for their Artificial Intelligence core engine called Watson, trained for specific enterprise/sector solutions. Watson is used in all the cloud platforms that IBM offers. De Melio: “We help clients to take advantage of our cloud platforms with industry- focused use cases and applications, using IBM but also other components. The platforms are hybrid: you can deploy modules on your own premises in combination with your legacy applications, mainframes, etc., and not everybody wants to have all data in the cloud. The architecture is set explicitly for data analytics and cognitive capabilities.” The global IBM platforms work on 50 IBM cloud data centres in 20 countries. The company is world market leader in cloud computing.

“An important difference with competitors like Google and Amazon is that we do not monetise the value of the data of our customers, i.e. the benefit of the analytics is for them,” sketches Christophe De Melio. This is an important IBM business ethic. Also crucial for him is that the Watson cognitive engine is defined as a help to users, not that it takes over. “It augments the clients reality. If you want, you can follow the reasoning, ask Watson  questions and it might respond with additional questions for you.” An often-used dataset to augment the client's reality is about weather. In 2016, IBM bought The Weather Company, not only for its data, but also for its high-volume, high-performing platform for doing analysis. Vestas, Denmark, is using this to define where to put windmills out at sea. The oil and gas companies use sea streams, iceberg movements and temperature to know where to place their drilling platforms. The capital of Ireland, Dublin, close to the sea, predicts traffic by combining weather data and other data on the IBM smart city platform. The sources are not only data about weather and tides, but also data from cars, traffic lights and the municipal wastewater systems. They know now where the sewer system would react less well when more rain is forecast while the tide is high (so the rainwater is not pumped easily into the sea). Traffic could then be hindered. They combine that with events happening in the city such as a football match and with knowledge about the way people behave then. All this is transformed into notifications to alert citizens.

Esri is inside the weather platform that IBM took over. Esri communicates: “The Weather Company integrated Esri basemaps, demographic and business data, and deep proximity analytic tools to provide powerful location-based insights that spur cognitive thinking and event-specific action.” Esri ArcGIS is integrated with many Watson platforms providing location analytics functionality, proximity search tools, and map visualisation as well as integration of clients' spatial data. It is used, for example, to support link analysis, fraud detection, and identity determination for government public-safety agencies as well as banking, insurance, and retail organisations. In addition to being in cognitive computing platforms, Esri is also in IBM business intelligence & reporting products like Cognos – as are others. Since last year, World Boundaries data from Pitney Bowes is embedded directly in Cognos and Watson. It is used to examine the financial services of various branches, for example, and to frame a list of under-performing ones to enable ATM locators at such places. The global spatial data provider looks ahead: ”It is the first step for a deeper analytics partnership with IBM.”

The new investment zone is the combination of Artificial Intelligence and the Internet of Things (IoT). “IoT analytics will have a lot of value in the same areas where GIS companies are playing,” confirms De Melio, such as supply-chain optimisation, energy optimisation in smart grids, location-based commercial services and precision farming. There are more than 9 billion connected devices operating in the world today, generating 2.5 quintillion bytes of new data daily. Making sense of data embedded in intelligent devices, in real-time, is creating a significant market opportunity that is expected to reach USD1.7 trillion by 2020. IBM opened the global headquarters for its new Watson IoT unit, as well as its first European Watson Innovation Center in Munich, Germany in December 2015. Now 1,500 people focus on this exploding stream of information and build new solutions at the intersection of cognitive computing and the IoT. “An issue with IoT devices is that they function in very decentralised infrastructures while the need for local analytics and local decisions is important,” which he sees as a challenge. “So we have to put 'the analytics on the edge.” That means that as much context information and logic has to be put as close as possible to the IoT device to do the wanted big data analysis on the spot.” He gives an example of a large retail client who uses IoT data from the clothes tags, social media data, location data, but also behavioural data and other kinds for his in-store marketing. ”A girl is testing her new outfit. She sends a text message from the fitting room to her mother to ask if she could buy it. The mother goes online to see if the shop gives a discount. There is no discount, so she says no to her daughter. The girl leaves, but as she passes the cash desk she is offered a push message on her cellphone with a discount offer. To give one more example, now from the smart city and energy platforms: IoT/Watson/cloud combinations monitor the energy balance of individual buildings, and  can regulate lighting, shading, electricity storage and distribution depending on the position of one building or part of a building amidst others. There will be a lot of sensors and location data as input for the logic reasoning. But the value only arises if you combine them very fast with other data sources – at best in our cognitive platforms.” Which we, of course, answer only with a smile.