An Assessment of the LADM from the Cadastre 2014 Perspective 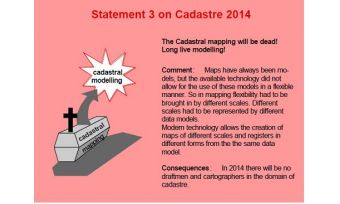 The Land Administration Domain Model (LADM) makes a significant contribution to understanding the importance of data modelling in the domain of land, land administration and land management. The ‘Cadastre 2014’ vision of the International Federation of Surveyors (FIG) stated back in 1998: “Cadastral mapping will be dead! Long live modelling!”. While one might think that this message was clear enough, few professional colleagues took it seriously. The editorial team of the LADM were the first to undertake action to get to the bottom of this important issue. Now that the LADM has become an official ISO standard, that statement is strongly underpinned.

‘Cadastre 2014’ is the result of a FIG Commission 7 working group examining trends and developments in the field of cadastre. The working group was active from 1994 to 1998 and presented its results at the FIG Congress in Brighton in July 1998. It projected the trends and developed visions of how cadastral systems might look in 20 years' time. The ‘Cadastre 2014’ vision has received worldwide attention and has been translated into 27 languages.

The idea of ‘Statement 3 on Cadastre 2014’ (Figure 1) is to model objects instead of thinking in graphical categories. Maps have no function as information repositories; their only purpose will be the visualisation of information. The consequence as mentioned in Statement 3 – that by 2014 draftsmen and cartographers will have disappeared from the cadastral field – was obviously slightly too inflated, but LADM efforts show that the general trend was correct. Cadastre 2014 has been a prominent departure point for the LADM. Indeed, in the introduction of the International Standard, it is highlighted that the LADM will be based on the conceptual framework of ‘Cadastre2014’.

The Necessity of a Modern Cadastral System
Latest article