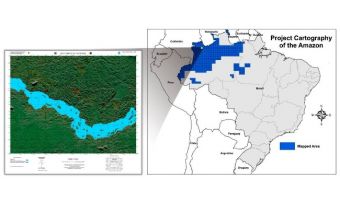 Geodata collection in tropical regions is difficult because of cloud cover and dense forestation. However, radar signals are able to penetrate clouds, and the P-band can even pass through vegetation foliage. Illustrating this, 1.2 million square kilometres of the Brazilian Amazon have been mapped between 2008 and 2013 using the X- and P-bands. The same radar data also enables detection of illegal logging, monitoring of aquatic plants and estimation of forest biomass. Here, the authors describe the underlying technology and give examples.

The remote sensing department of OrbiSAT – acquired by Embraer in 2011 and now rebranded as BRADAR – started in 2000 with the design and building of a synthetic aperture radar (SAR) instrument, the OrbiSAR. In 2008 the Brazilian army granted BRADAR (then still OrbiSAT) a contract to gather airborne X- and P-band data of the cartographic void in the Brazilian Amazon (Figure 1). This is, to our knowledge, the world’s largest systematic aerial mapping project using X- and P-band. The project took 5,230 flight hours using two Rockwell turbo commanders carrying the dual-band radar OrbiSAR (Figure 2). The Geographic Service of the Brazilian army processed the raw data to produce digital terrain models (DTMs), digital surface models (DSMs), X- and P-band orthoimages and around 2,880 maps at scale 1:50,000.

The Amazon region’s vast tropical rainforests are endangered by deforestation, mostly caused by illegal logging. Preventing such violations requires the regular acquisition and interpretation of geodata. Only remote sensing imagery is well-suited to capture such an extensive area comprehensively, but the constant presence of cloud cover limits the use of aerial or spaceborne optical imagery. However, both X- and P-bands can ‘see’ through clouds. Moreover, the P-band – with a wavelength of 75cm – can penetrate the foliage and reach the terrain underneath the vegetation. P-band signals reflect off the terrain and only return as backscatter to the radar sensor when reflecting again off tree trunks; a process called double bounce (Figure 3). In forests, where tree trunks are more abundant and/or larger than in open areas, more P-band signals return to the sensor. As a result, the radar imagery becomes brighter in areas covered with forests and appears darker in open areas. A continuous variation indicates that image brightness correlates with the vegetation biomass. These P-band properties allow the terrain and vegetation characteristics to be investigated. The X-band – with a wavelength of 3cm – reflects on the vegetation canopy. Radar X-band interferometry can be used to create models of the landscape surface (DSM) while P-band interferometry provides the data for modelling the terrain underneath the vegetation (DTM). When no vegetation is present, DSM and DTM coincide. The difference between the DSM and DTM heights gives an estimate of the vegetation height. The two bands interact differently with vegetation. Hence joint analyses of the reflections may enhance the characterisation of the vegetation diversity, while revisits enable changes to be detected. Assuming a constant DTM, changes in DSM are caused either by vegetation removal or vegetation growth. Changes in the amplitude of the backscatter, image texture and brightness also represent changes in the landscape.

Illegal logging is a scourge in the Amazon. Nowadays, deforestation is monitored via satellite imagery, but atmospheric conditions and resolution are limiting factors. For instance, illegal loggers have discovered that the removal of vegetation within the resolution of cell of 30 x 30m of MODIS on the Terra/Aqua satellite or the Wide Field Imager on CBERS (China-Brazil Earth Resources Satellite)– usually in the form of selective logging – remains unnoticed for a long time. By the time it is spotted, the damage has already occurred and the loggers are long gone. To detect the logging of a single tree, and thus to discover illegal logging at an early stage, we developed a monitoring system based on the investigation of high-resolution X-band image time series. For example, the study of two X-band images taken one month apart (see Figure 4) allowed the detection of objects which have appeared (red) or have been removed (cyan); grey indicates no change. The pattern of red and cyan spots close together in Figure 4 shows that single trees have been removed. The red spot indicates that a tree has been removed and the cyan spot indicates what was behind that tree and can now been ‘seen’ by the radar. The red rectangle near the centre of Figure 4 indicates vegetation has been cleared, most likely for grassland cultivation. Santo Antônio, a Brazilian hydroelectric plant in the Amazon region, is employing this technology to monitor the forested area under its protection.

Continue reading in the online edition of GIM International. 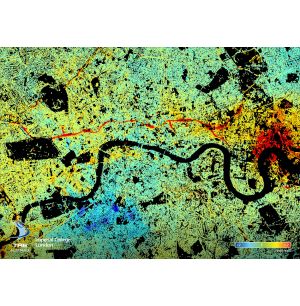