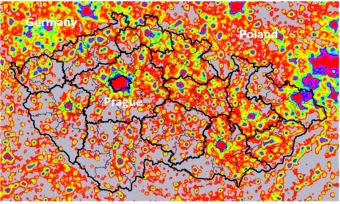 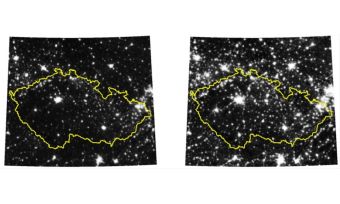 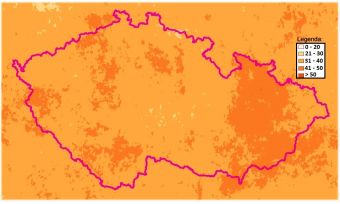 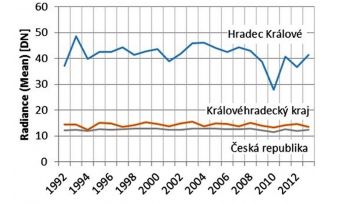 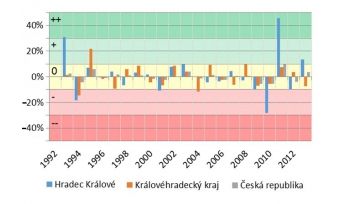 A country’s local spatial development can be derived from socio-economic indicators assigned to administrative units. Proper management and monitoring often require statistics at a more detailed level. However, it is difficult if not impossible to sub-aggregate the statistics to smaller areas than administrative units. A reliable alternative is to measure the intensity and extent of night-time illumination and the changes over time. Read on for details of a project based on two indicators derived from satellite night-time images for monitoring local spatial developments in the Czech Republic.

Based on analysis of satellite images of the Czech Republic captured at night, the first development indicator identifies the increase or decrease in the amount of light over time and the second indicator identifies year-on-year changes. As the amount of night-time light is computed per grid cell covering an area of 0.55km2, which can be aggregated into any spatial extent and thus spatial detail, the indicators can be computed for small spatial units (Figure 1). Both indicators enable the determination of intraregional development over time but do not allow interregional comparisons.

NOAA’s National Centers for Environmental Information (NCEI, formerly the National Geophysical Data Center) captures and processes night-time light images taken by satellite sensors, one of which being the Operational Linescan System (OLS) which orbits at 830km above the Earth surface. The spatial resolution of the data is 2.7km and the dynamic range is 6 bits, i.e. the digital numbers (DN) range from 0 to 63. Time series of annual cloud-free composite night-time images have been available since 1992. OLS can detect visible and near-infrared light of which the intensity is one million times weaker than most other satellite sensors and this allows the detection of artificial light. The 14 orbits per day enable the planet to be captured between latitudes 75° north and 65° south between 20:30 and 22:00 hours.

Influences of light from the sun and the moon are removed, as are aurora, fires, laser light and other undesirable light sources. Areas obscured by cloud cover are also excluded. From the data captured by six satellites in the period of 1992-2013, a time series of 34 annual cloud-free night-time composites of the Czech Republic was generated, with each pixel covering an area of 0.55km2. Figure 2 gives a first impression of the changes in nocturnal light emissions over the course of the two decades. A metadata file contains the number of observations used for each grid cell to calculate the annual values (Figure 3).

To monitor the long-term trend, it is necessary to equalise the radiometry of images from the six sensors taken during a time span of over 20 years. The results of the standard radiometric calibration did not enable proper calculation of the development over time. Therefore, the authors developed their own calibration approach based on robust regression using a second-order polynomial instead of linear regression. This enabled the successful minimisation of the differences in the sum of light values for the entire country derived from the night-time images acquired by the diverse sensors over the course of one year. The corrected light values were used to calculate the two indicators.

The trend indicator computes the annual mean of light emission per grid cell. To arrive at a value per region, the means of the grid cells are added together and divided by the area of the region. Figure 4 shows a graph of the trends in two Czech municipalities and in the Czech Republic as a whole. Fluctuations over time may be due to investments, building projects, economic recession, depopulation or other socio-economic factors. Of course, changes in types of light sources may also affect the trend. Since the values do not take into account the degree of urbanisation, this indicator does not allow interregional comparisons of developments.

The annual change indicator computes the annual changes as the differences between the means of two consecutive years divided by the mean of the first year. This percentage provides a measure for the proportional change in the given year compared with the year before. Figure 5 shows an example: + indicates sustainable development; ++ means a fast, unviable development; 0 represents stagnation or little development; - means a slight decline; and – indicates a major decline. Figure 5 also shows that Hradec Králové suffered from the financial recession in the period 2008-2010. In 2011 a recovery commenced as a result of new investment projects.

Vladimíra Šilhánková gained an MSc in 1994 and a PhD in 2000, both from the Faculty of Architecture, Brno University of Technology. She served the city of Hradec Králové as principal architect and expert on strategic development from 1997 to 2003 and as a member of the city council from 2004 to 2014. Since 2003 she has been an associate professor and vice-rector at College of Regional Development, Prague, Czech Republic.

Jan Langr is specialised in digital cartography and geographical data and has been project leader at T-MAPY Ltd. since 1995. He graduated in mathematics and physics from the Pedagogical Institute in Hradec Králové and gained GIS-related knowledge and skills through post-graduate studies at University of Technology, Ostrava.

Michael Pondělíček gained an MSc from Charles University, Prague, in 1991 and a PhD from the Faculty of Architecture, Technical University Brno in 2013. His PhD thesis focused on environmental indicators for sustainable development. He is currently vice-head at College of Regional Development and teaches environmental risks, security and assessment.

Figure 3, Number of observations used in the calculations.

Figure 4, Trends of nocturnal light emissions in two Czech municipalities and in the Czech Republic as a whole.