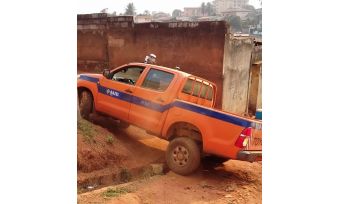 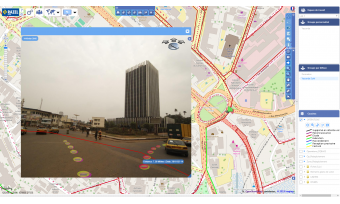 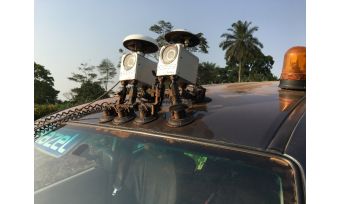 In Yaoundé, Cameroon, little cartographic data of the road network, public assets and utilities is available. To efficiently renovate the city’s drinking water network, mobile mapping technology was used, taking extra care to ensure planimetric accuracy near the equator. It provided the GIS data for the road maps needed for the project planning. The experimental methodology used – with GIS and web suites integrated in the network construction project at all stages – was a good fit with the current African context and offers promising potential for future projects.

The Cameroon Water Utilities Corporation and Water Cameroonian are jointly in charge of creating and renovating infrastructures to provide drinking water to the Cameroonian population. Although the situation in this West African country is improving, in the capital Yaoundé for instance – which has a population of 2,5 million – still only a minority have access to drinking water via an individual connection. Renovation of Yaoundé’s drinking water infrastructure was necessary; a new underground water network had to be built. But the construction company to which the work was subcontracted – Razel Bec Fayat –needed accurate road maps for its implementation plans, and they were not available.

Tight deadlines and the lack of up-to-date surveys and GIS data about Yaoundé led Razel to choose a mobile mapping system (MMS) for city surveying purposes. The mobile collection of georeferenced images would enable a fast and effective field survey. The surveys had to be performed as quickly as possible, since 230 kilometres of urban roads needed to be covered before the start of the rainy season.

The company Immergis was asked to help manage this mapping amd GIS project, and the Imajbox MMS (by the French company Imajing) was chosen as the equipment to be used. Imajbox could be easily mounted on any vehicle suitable for the challenging local road conditions. A large part of the city’s road network is neither paved nor maintained, which makes access and surveying difficult. The mobile collection of georeferenced images proved to facilitate field surveying in record time. The surveys were optimised by using two synchronised systems oriented towards two different angles. Each road was covered in both directions. Field operation teams had to deal with unforeseen events. Confronted with traffic jams and busy streets crowded with markets and small businesses, the teams adapted their surveying times to early morning and non-working days. The MMS enabled quick installation and automated calibration at any time. The Yaoundé survey took just eight days, so work was completed before the rainy season.

In areas close to the equator, like Cameroon, global navigation satellite system (GNSS) signals are affected by strong atmospheric influences such as ionospheric errors. Consequently, GNSS-based survey results often are not as good as in mid-latitude areas, such as in Europe. Hence, GIS data cannot be extracted for road map creation without extra steps to improve the absolute planimetric accuracy. In Yaoundé, no RTK infrastructure with ground reference base station network was available. Therefore, the project team decided to use an additional external receiver, synchronised in time with the Imajbox system, to receive real-time geostationary satellite constellation corrections. In post-processing, the results calculated by the receiver and inertial data from the MMS were merged to enable geographical positioning of each image surveyed. This configuration made it possible to collect GIS data with sufficient accuracy for road map design.

DWG maps with detailed roads and asset locations, positions and dimensions were required for end usage in CAD software. Other elements of the Imajing software suite were used to extract GIS data from the survey results and also to make 3D measurements in images. Points and lines were produced to identify road shoulders, roadside slopes and all urban assets and road environments. A GIS database was built. The insufficient number of geodetic markers located within the city boundaries proved to be challenging. It is difficult to unify data – especially the altimetry data – derived from modern technologies and traditional levelling methods that were used in Cameroon. Existing geodetic markers combined with local cadastral data were used to recalibrate the survey data and provide reliable Z coordinates. The database was smoothed and readjusted based on the different sources of information available. Within three months, Immergis had produced the road maps and provided DWG maps each week. This enabled constructor Razel to perform all the pre-work planning before making a start on the new water network. Furthermore, the usage of the mobile mapping technology aroused the interest of other companies in road construction and linear infrastructure projects. They all require up-to-date spatial data, and this project demonstrated that acquisition can be quick, efficient and reliable.

To display road maps, the location of project water pipes and survey images, the Immergis Web GIS platform was used. It helped the project team during work planning, reduced the number of field visits and accelerated the production of execution drawings. But planning and implementing construction works for 230km of underground water pipes in less than two years in a city like Yaoundé is a sizable challenge. The project manager at engineering company Razel needed the GIS to go further; it had to become part of the everyday life of the project at all stages. He requested that the GIS should assist with the work supervision, ease day-to-day decision-making and speed up the production of hundreds of mails to be sent to the project partners, such as the city council and the existing telecom, water and electricity network operators. Adapting the software to the project needs and to the local context, such as fluctuating internet access, was also challenging, but Immergis Web was successfully adapted to include a document management system, allowing the automatic generation of the mails (such as works authorisations or network cuts) that needed to be sent in each project phase. Other functionalities such as real-time display of the progress at each worksite were also developed.

The successful implementation of GIS software and web suites in this project has made the engineering company rethink and adapt its work procedures in order to integrate the approach into its internal processes. 25 project members at Razel, ranging from engineers and quality, safety and environment managers (QSEs) to project managers and designers, are now using the platform on a daily basis.

Sébastien Albouy is the hydraulic director of Razel Bec Fayat in Cameroon and the project leader of the Yaoundé water supply improvement project. He has 20 years of experience in construction companies and water supply engineering around the world.

Vincent Lecamus co-founded Immergis and has been CEO for the past 11 years. He is an expert in mobile mapping services for network and assets management.

Inès Guth is marketing and business developer at Imajing s.a.s. and is involved in several international projects.