Climbing to the Peak of Precision 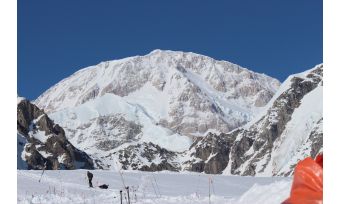 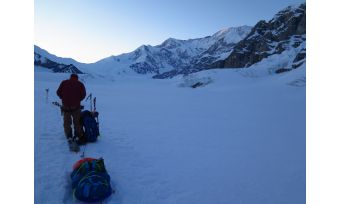 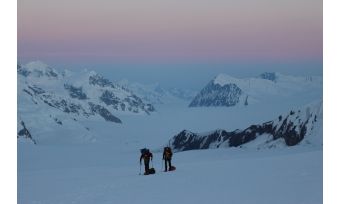 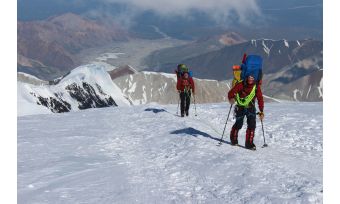 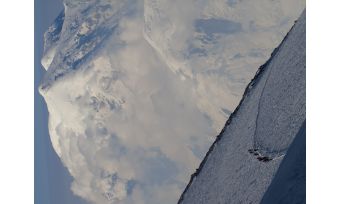 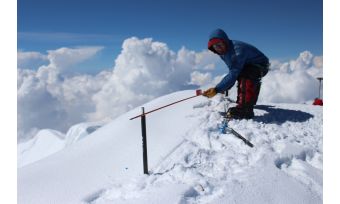 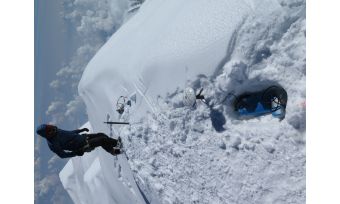 Surveyors, mappers, geodesists and other scientists, as well as climbers and mountaineers from around the world, have long held a curiosity to know the official elevation of Denali, the continent's highest peak. Since the last survey of Denali’s apex in the 1950s, GPS/GNSS equipment technology has significantly improved. In June 2015, the U.S. Geological Survey (USGS) partnered with NOAA’s National Geodetic Survey (NGS) and the University of Alaska Fairbanks (UAF) to re-survey Denali’s peak using the most advanced precise point positioning technology. The survey party was led by CompassData, a subcontractor for Dewberry, under contract to the USGS and consisted of four experienced climber-scientists.

Denali, Alaska’s most magnificent natural treasure within Denali National Park, remains the highest mountain in North America and the third highest mountain of the world’s renowned ‘Seven Summits’. About 1,200 mountaineers attempt to summit the mountain each year and typically about half of them are successful. The previous summit elevation of 20,320ft (6,193.5m) was established using 1950s’ technology. In 2013, it was called into question when a report stated an updated estimate of 20,237ft (6,168.2m) near the summit. This measurement was part of a larger project to collect revised elevation for the entire state under a national initiative called the 3D Elevation Program (3DEP). This newer number was collected from an interferometric synthetic aperture radar (IFSAR) sensor. IFSAR is an extremely effective tool for collecting map data in large and challenging areas such as Alaska, but it can struggle to provide precise point elevations in very steep terrain and narrow ridges.

In June 2015, the USGS, NGS, UAF and CompassData partnered in a mission to officially update Denali’s peak elevation using advanced precise point positioning technology. In September of that year, just days after Sally Jewell, U.S. Secretary of the Interior, announced that Mount McKinley would be renamed to officially carry its Native Alaskan name of Denali, the USGS and its partners announced that the updated height for Denali's peak had been set at 20,310ft (6,190.5m).

Trek to the top

The team began their precarious trek to the summit in mid-June to take advantage of a narrow window for good weather, with scientific instruments in tow. The team took the 40-minute flight from Talkeetna Airport near the entrance of Denali National Park onto the Kahiltna Glacier to begin their ascent. The Lower Kahiltna has massive crevasses with the potential for lethal falls. The best way for the team to mitigate this hazard was to cross the glacier during peak freezing (between 11:00 p.m. and 5:00 a.m.). The move to the first camp on 16 June took the team about six hours and covered roughly seven miles (11.3km).

On 24 June, after 9 days of climbing and acclimatising, two of the climbers from CompassData left their camp at 14,000ft (4,267m) at 6:30 a.m. with the aim of surveying the summit. The goal was to move as much as possible, while acknowledging that the weather could change quickly and strand the team away from their cache. The team used a ‘double hauling’ method, which refers to the process of leaving a camp intact and carrying extra food, cooking fuel and clothing up the mountain and then burying these supplies to help reduce the load and aid in acclimatisation. This method had been implemented to cache most of the survey gear including a summit snow probe at 17,000ft (5,181m) prior to this summit attempt.

The area immediately above this cache point is statistically the most dangerous part of the climb and is extremely cold in the morning. A primary concern was that the high-tech equipment might not work in the cold temperatures. To avoid this, each piece had been wrapped in closed-cell foam to provide insulation and wired to run on an auxiliary lead acid motorcycle battery. These efforts paid off and neither survey unit experienced any technical difficulty.

The ‘Autobahn’, as it is known, is an upward-trending traverse across a 3,500ft (1,066.8m) face to finish at Denali Pass. The survey team was pleased that Denali National Park staff had established a thorough network of pickets and runners at 30m intervals across the traverse to allow climbers to perform what is called a ‘running belay’. Here, the first climber clips the rope into a carabineer attached to the picket and second climber removes the rope from this carabineer. This prevents the team from falling off the Autobahn and down onto the St. Peters Glacier (an often fatal fall).

The team reached the summit at around 3:15 p.m. on 24 June and a small, prominent diamond of snow near the south-face cliff edge was identified as the highest point. A range pole was driven into the snow near this point and levelled with it. The GPS equipment (Trimble NetR9 powering a Zephyr-2 antenna) was installed onto the pole and powered on. A second range pole was then driven into the snow 2.5m away from the summit range pole and the trail, and levelled with the first pole using the tank antenna and a level. This second set-up, a Trimble R10, gave redundancy to the survey, and its off-trail location reduced the risk of tampering. Snow depth was measured at both poles.

The team of two returned to 14,000ft (4,267m) following the summit survey. The equipment was left collecting until the following day when a team from Mountain Trip guiding service removed the receivers. Two days later the CompassData team returned to the summit and removed all remaining equipment. The entire team safely descended the mountain and arrived at base camp at 7:00 a.m. on 29 June.

To ensure the most accurate elevation number, specialists from CompassData, UAF and NGS all independently processed the survey data and a meeting was held to compare those calculations. All findings were very consistent and remaining questions focused on how to express the new height. Ultimately, an agreement was reached on the reference surface to be used and the rationale for using the North American Vertical Datum of 1988 (NAVD 88) as the vertical datum. NAVD 88 is the official vertical datum for Alaska in the National Spatial Reference System (NSRS), a system that is defined and maintained by NGS to provide a consistent coordinate system across the entire USA. A new effort underway at NGS to modernise the NSRS by 2022 will incorporate an improved model of where the average sea level, or ‘zero’ elevation, is located. This will result in elevation values being more accurate with respect to mean sea level.

The final elevation number is remarkably close: within 10ft (3.05m) of the previous official elevation number. This is a testament to the skills and determination of the early surveyors and mountaineers who, with considerably less-sophisticated equipment, calculated an elevation that stood the test of time. It is only now, with major advances in GPS/GNSS technologies, that a more precise elevation could be calculated. It is impossible to say for certain that the early survey was not accurate and that in the ensuing 60 years there has been an elevation change at the summit. The similarity between the new number and previous surveys validates notions that the summit snowpack remains nearly constant from year to year. And finally, it answers the ultimate question by establishing a revised official elevation of 20,310ft (6,190.5m) for Denali's peak.

Mark Newell is a public affairs professional with the U.S. Geological Survey where he specialises in communications and information activities related to geospatial data, mapping products and location-based services. As a retired Army officer and Ranger with combat experience, he commanded soldiers at various levels and served around the world as a Public Affairs Officer. He ended his military career as an assistant professor of Public Affairs at the Defense Information School and has been with the USGS for nearly 15 years. He is also the content coordinator for The National Map websites (nationalmap.gov), the USGS Facebook page (facebook.com/USGeologicalSurvey) and runs The National Map Twitter site (@USGSTNM).

Blaine Horner is the accounts executive for CompassData, Inc. located in Centennial, Colorado. He worked as a field surveyor for CompassData for the last seven years including performing work in Haiti, Turkey, Japan, the Caribbean Island chain, 14 locations throughout Greece and the Greek Isles, surveying in 45 U.S. states, and once performing 88 days of straight survey work throughout nine countries in Europe. During the years in the field, he spent winters ski-patrolling at Crystal Mountain, Washington, and has worked on Denali as both National Park Service search and rescue and as a mountain guide for Mountain Trip.

Figure 1, The survey party began their ascent to the summit from the base camp on the Lower Kahiltna glacier, looking up at the summit of Denali from base camp. (Photo: Blaine Horner, CompassData)

Figure 2, Crossing the Lower Kahiltna glacier during peak freezing, which on this trip was at about 1 a.m. (Photo: Udi Karriere, CompassData)

Figure 3, Climbers Tom and Udi continue towards the Denali summit, with sleds in tow. The amount of gear required to climb Denali is too heavy for single backpacks, so each team member also pulled a plastic sled with equipment. (Photo: Blaine Horner, CompassData)

Figure 5, After leaving the 17,000ft camp for the final leg, the climbers performed a running belay to cross the ‘Autobahn’. (Photo: Udi Karriere , CompassData)

Figure 6, The lower section of a one-metre range pole was driven into the snow about half a metre north of the summit point. Udi Karriere demonstrates the method used for the levelling process. (Photo: Blaine Horner, CompassData)

Figure 7, Survey equipment was powered on. The Zephyr-2 antenna was connected to the NetR9 on the summit and the R10 was established at a 2.5-metre offset. (Photo: Udi Karriere, CompassData)