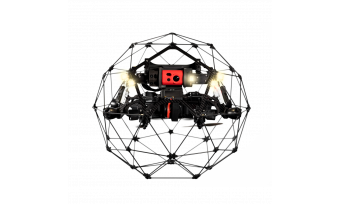 Flyability and Pix4D recently announced a partnership agreement to offer bundled Flyability and Pix4D products. The bundle will be sold in the form of a photogrammetry add-on that can be purchased on top of Elios 2 drone packages. This offer is meant to facilitate access to a coherent and complete product offering for those who want to tackle indoor 3D modelling using photogrammetry.

Flyability is a Swiss company building solutions for the inspection and exploration of indoor, inaccessible and confined spaces. By allowing drones to be used safely inside buildings, it enables industrial companies and inspection professionals to reduce downtime, inspection costs and risks to workers.

The value of 3D modelling in confined spaces

To illustrate the value of 3D modeling in confined spaces, Flyability recently performed a demonstration for a customer who is running a refinery. The customer was wondering if they had to cut open the riser in one of their FCC units during a turnaround to remediate a defect. By looking at 2D pictures, it was challenging for them to determine the severity of the defect. By building a 3D model of the part of interest, they could immediately see that the defect did not threaten the functioning of the equipment, and remediation could wait for the next turnaround or proper planning. Using a 3D model literally saved them days of downtime.

“Drones and photogrammetry have proved their potential in many applications,” says Nikoleta Guetcheva, head of marketing at Pix4D, “but using the Elios 2 to create a 3D model now allows teams to make more informed decisions and provide a valuable record for the future in places that were once inaccessible to the human eye.”

The launch of the new Photogrammetry Add-On comes along with the launch of a new training course dedicated to Indoor Photogrammetry. This course will initially be available through Flyability directly and subsequently through its Authorized Training Centers, progressively throughout 2020.

Programme of the 57th Photogrammetric Week in Stuttgart Announced