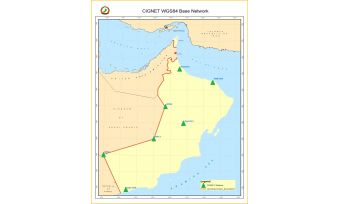 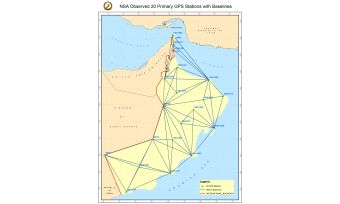 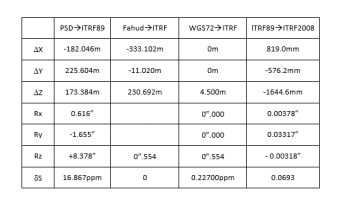 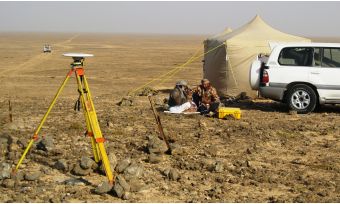 Today GNSS is widely used in Oman. High and homogeneous quality of GNSS positioning requires a geocentric datum attached to the International Terrestrial Reference Frame of which the parameters are regularly revised. The authors describe the creation of the new Oman National Geodetic Datum which is attached to ITRF2008.

A national network-based real-time kinematic GNSS service provides a single standard for the acquisition and use of geodata by multiple users. Added to this, Oman aims to establish a network of continuously operating reference stations (CORS) that provides GNSS positioning to a broad range of users including surveyors, GIS professionals, engineers, scientists and the public at large. The International Terrestrial Reference Frame (ITRF), which is the most accurate of all reference systems, is increasingly used by countries as the basis for their national reference systems. Due to plate tectonics and tidal deformation, the parameters of ITRF regularly need upgrading. Thus, a national geocentric datum also needs regular revision. The datum used in Oman was previously based on ITRF89 and was created in 1994, but it was updated to ITRF2008 epoch 2013. This new geocentric datum, known as Oman National Geodetic Datum (ONGD14), was launched in December 2013 at the Oman Geospatial Expo in Muscat and now provides GNSS users with a modern surveying infrastructure.

The National Survey Authority (NSA) of Oman, established 1984, is responsible for all survey activities for assembling and maintaining Oman’s geographic archives. NSA creates and enforces standards for topographic surveys and mapping; manages and maintains the national archive of geographic materials; revises and provides maps, air charts and other geoinformation; and establishes and maintains horizontal and vertical control points. NSA has technical and HR capabilities for the production of geodata and performance of the mandated survey activities. NSA employs about 180 technical staff.

History of Datums in Oman

The oldest datum is the Fahud Geodetic Datum of 1954 which was established for the oil industry. It is based on the Clarke 1880 reference ellipsoid and is a horizontal (2D) datum. The first geocentric datum was created through a Doppler satellite campaign in 1979, which connected 42 Fahud Datum points to WGS72. To migrate this system into the geocentric coordinate system of ITRF89, seven Doppler stations were remeasured in 1993 and connected to the Cooperative International GPS Network (CIGNET) through an adjustment to the Fundamental Station Wettzell located in Germany (Figure 1). The coordinates of the Fundamental Station Wettzell were referenced to ITRF92 and the solution was transformed into ITRF89. The First Order GPS Network, consisting of 79 GPS control stations, was connected to ITRF89, which adopts WGS84 reference ellipsoid. The Second Order GPS network was gradually established and completed in 2010, resulting in 494 stations. The coordinates were determined by 2-to-4-hour sessions of GPS observations, depending on the length of the baseline.

Survey instruments and GIS software from vendors such as Leica, Trimble, Topcon, Intergraph and ESRI are widely used in Oman. Users of ONGD14 would benefit tremendously when vendors would include the transformation parameters to the new datum in their products.

Yaqoob Al-Toobi graduated from the Royal Air Force (RAF), Cranwell, UK, in 1985, studied geography at Beirut University and holds various MScs, most recently in national defence, Jordan, 2010. He has been head of the National Survey Authority of Oman since 2012.

Saleem Al-Hashmi studied business administration at Bradford University, UK, where he received a BA (Hons) in 1994. He is director of geospatial information with the National Survey Authority of Oman.

The Age of Mobile Mapping