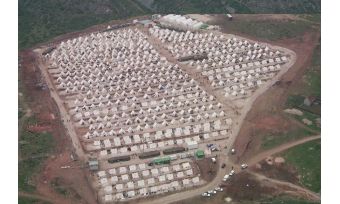 The most serious concerns in armed conflicts are human casualties, destroyed infrastructure and houses, and displacement of populations. Destruction and displacement have a big influence on land and property-related issues during, and specifically in the aftermath of, a conflict (Unruh & Williams, 2013). Land issues grow in complexity immediately after the conflict as many displaced people return to their places of origin to find their houses and properties destroyed, damaged or illegally occupied by secondary occupants. Land and its administration are always negatively affected during conflicts and in post-conflict situations. In this article, the author argues that, if land and its administration are neglected or not properly addressed after a conflict has ended, land can become a cause for renewed armed conflict and an obstacle in the rebuilding of a post-conflict society.

(By Dimo Todorovski. ITC, University of Twente, The Netherlands)

The relationship between land, conflict and post-conflict contexts was also explored and the specific findings were presented as a framework for rebuilding post-conflict states under components including institutional weaknesses, economic and social problems, and serious security problems.

In some of the cases, land was either a major cause or was one of many factors that influenced the eruption of armed conflict. Therefore, land issues required specific attention during state-building in post-conflict contexts. This confirmed the recognition that all conflicts have a land dimension. Additional confirmation from the cases shows it is beneficial that specific interventions in land administration and land-related issues should be included in the peace agreement documents integrated in the United Nations (UN) operations. Findings show that, when that was not the case, the development of the land segment occurred later resulting in complications to and a slowing down of post-conflict state-building. Where applicable, it was beneficial to quickly adopt ad-hoc land policies which strengthened the legitimacy of the state and supported political stability, as was shown in the case of Rwanda. The explored cases showed developments in the land sectors regarding creation of land legislation, organisations with enforcement mandates and participation by citizens and authorities involved, and these contributed to the rule of law in post-conflict contexts.

Development of a National Land Policy in post-conflict contexts benefited all related users. This was most efficient when it was developed within a broader National Development Strategy, jointly created and accepted by all relevant stakeholders. The land policy needs to contain clear directions about the development of the land law and appointment of specific organisations with a mandate for enforcement of the law and the policy. In all five explored cases, the creation of specific organisations such as land administration organisations and land-claim commissions revealed that this supported the governmental structure and strengthened the weak post-conflict political system. In addition, capacity building was required and implemented in relation to the legal framework, the creation of organisations, the education and training of land professionals, and equipment. In all cases, capacity building was supported by assistance from international actors or development partners. Findings have shown that the mentioned land-related activities are most effective and efficient when developed with international assistance and through implementation programmes or projects. Interventions in land administration contributed to improvement in the political leaders’ low legitimacy and also to the legitimacy of the state. In the case of Rwanda, findings showed that building the legitimacy of the state was initially based on the ad-hoc land sharing policy, allocation of state land, and housing and village settlements. Interventions in land administration, as discussed here, support overcoming post-conflict institutional weaknesses.

Addressing the specific land management/administration interventions within the peace agreement documents in three explored cases, and addressing land issues as regards displaced persons as in all five cases, was a first step towards involving land and its administration in the improvement of the economic and social situation in post-conflict contexts. In addition, the creation of specific land-claim commissions and land administration organisations supported the population, and specifically the displaced people, in settling the land disputes and reduced the social and security tensions. The aim of land administration organisations is the creation or improvement of the land registration and land administration system. The explored cases showed that this was successfully realised, supported by implementation programmes or projects, which further contributed to sustainable development and supported the property market. The success of the implementation programmes and projects, as was the case in both main-case studies, is visible through the economic development and reduced social tensions. Development of land administration, specifically in the creation of land records in four cases (or recovery of the land records as in the case of Kosovo), contributed to the service provision to all land-related sectors and significantly increased the security of land rights. This supported the establishment of the land market and improved the overall economic development. When land records became available, provision of land products and services assisted the requirements of displacement and destroyed properties. Interventions in housing and property rights and land administration are identified as elements that contributed to solving the prevailing social and economic problems.

Addressing specific land management, administration (in three cases) – and land-related issues in the peace agreement document – was shown in all cases to contribute to some degree to improving security situations with regards to the displaced population. Land dispute and claim mechanisms were adequately developed in each of the five explored cases. In addition, findings reveal that these mechanisms are seen as instruments that support the settlement of land disputes and reduce conflict tensions.

The interventions in land administration identified here are recognised as facilitators of post-conflict state-building (Todorovski, 2016).

Dimo Todorovski holds a PhD from University of Twente. After 19 years of professional engagement in the Agency for Real Estate Cadaster in Macedonia, he joined ITC in 2011. He is course coordinator for land administration specialisation at ITC, University of Twente, The Netherlands.