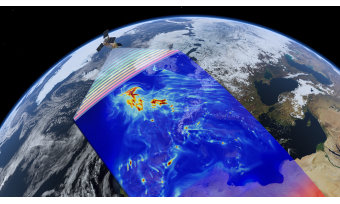 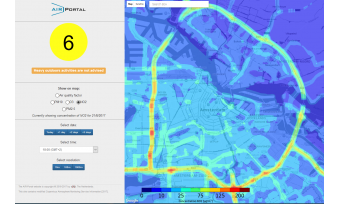 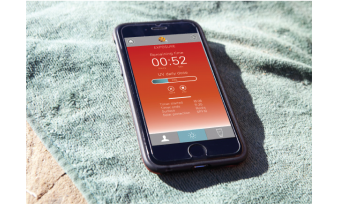 Disturbing figures on air quality and UV solar radiation have resulted in a booming interest in environmental public health monitoring. Especially regarding UV radiation and atmospheric composition, real-time health-risk probing tools that rely on satellite observations now feed personalised smartphone apps and global statistics on a daily basis. The Horizon 2020 AURORA project aims at an optimal exploitation of Copernicus Sentinel satellite observations and model data in order to increase the horizontal resolution and surface accuracy of this spaceborne approach. This article explains how this data is enhanced and illustrates how it is used in two health-related apps.

AURORA stands for ‘Advanced Ultraviolet Radiation and Ozone Retrieval for Applications’. The term ‘retrieval’ denotes the derivation of atmospheric constituent densities from remote – mostly satellite – observations. Although the AURORA retrieval concept can indeed be extended to a wider set of atmospheric targets, the project’s key scientific aim is to retrieve global atmospheric ozone in an ‘advanced’ way so that polluting tropospheric ozone and harmful UV radiation can be operationally determined with unprecedented quality. The technological goal of AURORA is to initiate the development of an online real-time data monitoring platform and health advice applications that exploit air quality and UV radiation statistics.

Space-based atmospheric composition observations typically suffer from limited horizontal (and temporal) resolutions and strongly reduced surface accuracies in terms of tropospheric bias and precision. The AURORA project intends to address these two shortcomings by means of an optimised exploitation of Copernicus Sentinel satellite data. The relevant Copernicus ozone monitoring missions are the Sentinel-5 Precursor (S5P) launched on 13 October 2017, and the Sentinel-4 (S4) and Sentinel-5 (S5) from 2022 onwards. They will provide a massive amount of atmospheric composition data with unprecedented quality; a major potential strength of these Sentinel satellite observations lies in their complementary information obtained from simultaneous measurements of the same air mass. Measurement observations are fused from three retrieval wavelength ranges (UV, visible and thermal infrared) from both the low-Earth-orbit S5 and S5P platforms with daily global coverage and the geostationary-orbit S4 platform with hourly European coverage. In a later stage, two upcoming non-European geostationary missions called TEMPO (from NASA) and GEMS (from JAXA) will be added to the ozone data fusion input stream. The horizontal resolution of the data fusion output is still in the order of tens of kilometres, but the combined measurement accuracy in terms of bias and precision throughout the whole vertical ozone concentration profile is expected to be significantly improved (see ‘Equivalence of Data Fusion and Simultaneous Retrieval’ in Further Reading for more details). As not all satellites involved have been launched yet, this improvement is currently demonstrated on simulated data for four months (April-July) in 2012. The retrieval simulation is based on the MERRA-2 global ozone field by the NASA Global Modelling and Assimilation Office (GMAO).

In order to allow for real-time data monitoring and health app development from the fused Sentinel satellite data, the AURORA project integrates the assimilation of all this data in its processing chain. Data assimilation is about finding a weighted average between observations and model data. The resulting average (also called the analysis) is the best estimate of the real atmospheric ozone distribution. Continuous data assimilation of the AURORA fused product allows for near-real-time monitoring and forecasting (up to five days) of atmospheric ozone on a global scale. In AURORA, two state-of-the-art data assimilation systems (DASs) are applied (IFS from ECMWF and TM5 from KNMI). These two DASs serve major stakeholders in the user community, thus facilitating the AURORA outreach to, for example, the Copernicus Atmospheric Monitoring Service (CAMS). Moreover, with each DAS a fixed sequence of assimilation experiments is envisaged. This way, the performance of AURORA’s data processing chain can be verified for all processing steps. The resulting ozone analysis and forecasts are then post-processed to derive global fields of tropospheric ozone and surface UV radiation. Data comparisons of both intermediate data and these final products against ground-based reference observations allow demonstration of the improvements of the AURORA approach with respect to the direct exploitation of conventional ozone retrievals. Moreover, ground-based measurements permit horizontal redistribution of the assimilation output, increasing its resolution for health monitoring applications, as demonstrated in the next two sections.

Increasing urbanisation in combination with intense traffic and industrial activities leads to air quality problems in many cities across the world. Exposure to air pollution is now the fourth-highest risk factor for deaths worldwide. These problems are growing and have a negative impact on local and national economies, ecosystems and people living in urban environments. In order for governments to take effective measures to improve air quality, they need accurate information. This means the data needs to be real time, have a sufficiently high resolution, and provide forecasts. Yet cities now often rely on ground-based sensors to measure air quality. Such sensors are costly, however, and only provide information in a very specific location. Therefore it is difficult to sample an entire urban area at high resolution with ground sensors alone, and a combination with remote sensing is often the best solution. To address this issue, the AIR-Portal application has been developed.

Although Earth observation provides many advantages over ground-based monitoring alone, the spatial resolution that can be obtained is not sufficient to provide information at relevant urban scales, even with major improvements made by AURORA. In order to get the information down to street level, the AIR-Portal combines remote sensing data with additional data, such as ground-based air quality measurements, traffic density, meteorology and land usage information. All this data is combined and then processed using a specially designed scaling algorithm, resulting in air quality forecasts at street level. The data is then provided to the users via a website and mobile application. The unique combination of forecasting and high resolution, made possible by AURORA, will allow cities and citizens to take action to improve the quality of life.

Solar light has a lot of benefits for health and wellbeing. It helps people to relax, activates endorphins and determines the rhythms of body, mind and life. For example, a minimum amount of ultraviolet (UV) light is needed to trigger vitamin D production in the skin, which is essential for calcium absorption, for promoting bone growth and for many other bodily functions. On the other hand, too much sunlight can be harmful; excessive exposure to UV radiation is associated with different types of skin cancer, sunburn, accelerated skin aging as well as cataracts and other eye diseases. People lack an effective decision support system, e.g. a ‘digital sunlight healthcare assistant’, delivering personalised and actionable information on a daily basis about solar radiation exposure. It should allow a personal solar dosimetry control, maximising the benefits and minimising the health risks related to sun exposure, especially for children. The optimal balance of UV radiation, with respect to vitamin D on the one hand and avoiding sunburn and photo-aging effects on the other, is a challenge for the general public.

HappySun is a satellite-enabled technology answering to this need by measuring the sun’s effects on a user’s body and recommending how to get the best from its rays. The app uses satellites to take continuous measurements of the UV solar radiation doses the user is exposed to. No smartphone sensors or other external devices are used, so there is no need for the smartphone to be exposed to or positioned towards the sun. HappySun assesses the user’s skin type and takes into account the amount of sunscreen already applied as well as the levels of reflection in the surrounding area, all to help the user get the best out of the sun.

The HappySun app represents a new methodology for the personal dosimetry of UV radiation, allowing people to measure their cumulative UV exposure as well as suggesting personalised corrective actions the user can undertake for a healthy lifestyle in terms of daily sun exposure.

In summary, the Horizon 2020 AURORA project is aimed at ‘advanced ultraviolet radiation and ozone retrieval for applications’ from Copernicus Sentinel satellite data. The project’s key scientific aim is to exploit complementary information that originates from simultaneous measurements of the same air mass. This is achieved by data fusion from different retrieval wavelength ranges (UV, visible and infrared) and different satellite platforms. The fused product is assimilated and post-processed to derive global fields of polluting tropospheric ozone and harmful UV radiation in an operational way yet with unprecedented quality in terms of bias and precision. As a proof of concept of the AURORA approach for the health industry, the AIR-Portal and HappySun applications are already under development, addressing city ozone pollution and UV exposure risks, respectively. Additionally, AURORA will organise a call for ideas, primarily addressed to students and spin-offs, for the development of applications based on the project’s data platform. The call for ideas will be published in January 2018 and a notice will appear in advance on the AURORA website.