Combining Terrestrial Lidar and UAS Photogrammetry into One Unified Model 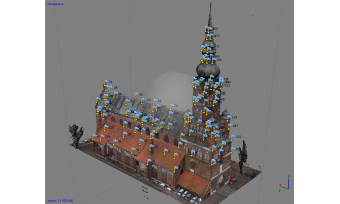 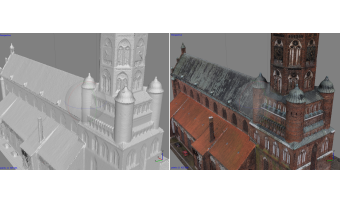 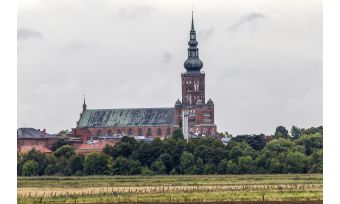 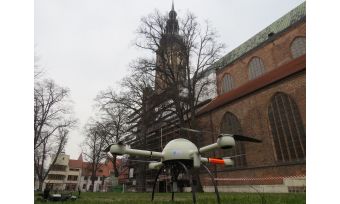 Reconstruction and maintenance work in historical buildings such as churches requires detailed and accurate information about them, but it can be difficult and expensive to acquire such data efficiently. The combination of terrestrial Lidar and UAS-based photogrammetry provides an adequate approach for gathering a full model of the outside of a church. Additionally, it allows for accuracy evaluation by comparing areas with overlap between terrestrial Lidar and the point cloud derived from the UAS images. Read on to learn about a project at the 13th-century Cathedral of St. Nicholas in Greifswald, Germany.

The imposing Cathedral of St. Nicholas in Greifswald, Germany, dates back to the 13th century (Figure 1). It undergoes continuous maintenance, which requires accurate, complete and up-to-date information for planning, damage assessment and structural design. The dimensions of the cathedral, and especially of its tower which is about 97m high, are impressive. The church is part of an urban landscape in the historic centre of the mediaeval town, making it difficult to survey the building with common terrestrial surveying methods. It was decided that a combination of two technologies would provide the best possible dataset. Terrestrial Lidar was used to scan the lower part of the cathedral up to the eaves of the nave of the church. This data was extended with unmanned aerial system (UAS) photogrammetry for the higher parts of the building, including the tower. The lower parts of the cathedral could not be recorded by the UAS since adjacent trees would interfere with the flight.

Terrestrial Lidar was performed with the phase difference Laser Scanner Photon 120 from FARO. This scanner has a range of up to 120m and a range measuring accuracy of 2mm for distances up to 25m. All the individual scans were linked together to generate one large, unified point cloud. Several highly visible targets were placed and tagged in the scans. Each target had known coordinates, which were used to reference the point cloud in the coordinate reference system.

After scanning, a set of 117 ground control points (GCPs), each with an accuracy of 1cm, was laid out around the church for georeferencing purposes in the UAS survey. The airborne survey was conducted with a UAS from microdrones (MD4-1000). This UAS allows comparatively long flight duration, and thus offers sufficient reserves in the case of a higher load due to wind or air turbulence. An Olympus PEN E- P2 camera with a fixed focal length of 17mm and 12MP sensor size was attached to the UAS.

Careful planning was required to obtain all the necessary information from the UAS flight. Both nadir and oblique images with significant overlap were required to reduce blind spots near the roof structure. It was decided to fly up and down the building in vertical strips as this is much easier than circling the building in horizontal flights. This latter approach would require a continuous change in the orientation of the UAS and the camera, which is much more complicated than changing the orientation once for each vertical strip. Each strip had to be located between 15m and 20m from the building. This provided the best balance between achieving a high degree of detail in the images and maintaining a sufficient safety margin to compensate strong wind shears. The variation in distance between the camera and the building had to be as small as possible since the camera was set to a fixed focal distance. If the UAS were to deviate too much from the planned survey distance, the images would become blurred, rendering them useless.

Two UAS surveys took place in March 2014, on a day with an overcast sky (Figure 2). This is preferable to a full sunny day, as the strong illumination differences and harsh shadows my cause problems in the subsequent dense matching phase. The nave of the church was captured in a conventional manner with nadir images in parallel strips at height of about 60 m. This first UAS flight was extended with some additional oblique images. In total, this resulted in 348 images of the nave of the church. A second flight was used to capture the tower of the church. This was done in 12 vertical strips with an oblique-looking camera at an angle of 30° in the direction of the facades. For these vertical flights along the tower, the image interval was set to achieve an image overlap on the facade of about 80%. During the tower flights, the images were triggered continuously, resulting in 550 images of the tower. This excludes the images from the descending strips. Due to a technical problem the camera looked unintentionally downwards when descending, resulting in unusable images. Since the overlap in all the strips is very high, all objects are still included in several stereo models.

The images from the UAS flights were used to generate a 3D point cloud using dense matching. This approach is based on an automated pixel-wise search for correspondences between overlapping images. First, the photogrammetric orientation of 923 images was calculated using Agisoft Photoscan. The 117 GCPs were used for georeferencing and to conduct an independent check of the results (Figure 3). For the nave area, this process resulted in a point cloud of approximately 11.5 million points, which was sufficiently dense for the required application.

The computed point cloud for the tower was not sufficiently dense because it was not possible to extract points at locations with low image contrast. The SURE software package, developed by the Institute for Photogrammetry at the University of Stuttgart, was therefore selected to perform densification on the point cloud. Within SURE, the 3D coordinates can be calculated for each pixel from several stereo models based on an adapted SemiGlobal matching algorithm. It requires orientation parameters and distortion-free images as input, for which the Agisoft results were used.

After computation by SURE, all points with an estimated accuracy of less than 2mm were filtered out. Subsequently, the point cloud was further thinned by a factor of 10, resulting in a point cloud of 180 million points. The three point clouds (lower part, nave and tower) could then be combined into one large, consistent point cloud.

Representative test areas in the overlapping zone between the terrestrial Lidar and UAS point cloud were used for accuracy comparison. They were located in different parts of the nave and ranged from 128 to 330m² in surface area. Since the point clouds from the two sources were based on the same coordinate system, an integration and comparison could be performed easily.

For each test area, the UAS point cloud was compared with the terrestrial Lidar data, which served as reference. The distance values were statistically analysed by creating a histogram and by computing the mean and standard deviation. Deviations greater than 30cm were excluded from the comparisons as outliers. The average deviations of the surfaces in the test areas were in the range of 1.5cm to 3.3cm. The standard deviations were in the range of 2.5cm to 8.8cm. Within homogeneous surface areas such as walls, the differences between the two point clouds were low and were within the range of a few centimetres. Small structures and edges were better represented in the terrestrial Lidar point cloud as they appeared smoothed in the UAV cloud. Large differences were mainly due to the lack of information in the other point cloud or, in some cases, caused by occasional outliers or incorrect measurements. Table 1 shows the outcomes in all test areas.

Quick visual inspection on demand is a long-held dream of architects and planners. The images provide a valuable basis for assessing the current state of a building as the basis for decisions on reconstruction. In this project, the combination of TLS and UAS photogrammetry was a logical step because each method overcomes the other’s problems. Combining them produces a dense and accurate 3D model of the entire building and is favourable from an economic point of view (Figure 4).

Figure 3, GCPs and checkpoints overlaid on the 3D model generated from dense matching.

Figure 4, Model of the nave (left) and rendering with photorealistic texturing (right).