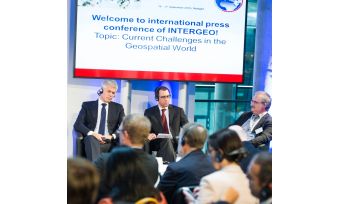 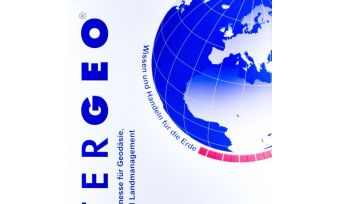 The 21st edition of Intergeo was held in Stuttgart, Germany, from 15 to 17 September. More than 16,500 visitors from 90 countries attended the world’s largest geomatics event to learn about the latest innovations and trends. Running in parallel to the trade show, which featured 549 exhibitors from 30 different countries, the traditional conference attracted around 1,200 delegates. The Intergeo organisers described geoinformation as “the global language that all decision-makers understand,” and this was reflected both at the exhibition and during the conference. An abundance of solutions and technologies to help society advance were on display in Stuttgart.

The focus at this year’s edition of Intergeo was not only on collecting data, but also on processing and distributing it. A number of eye-catching developments related to the availability and accessibility of data. Another clear trend was the blurring of the distinction between hardware and software as a growing number of companies offer an all-in-one solution. Other high-profile topics at Intergeo 2015 were mobile mapping, UAVs, BIM, GNSS and processing and visualisation.

The overarching theme of the conference was ‘Geospatial 4.0’, underlining the focus on the future of the industry. Karl-Friedrich Thöne, president of DVW which hosted Intergeo, described the industry as holding the key to a “revolutionary change”, since the intelligent networking enabled by Geospatial 4.0 holds the potential to launch a completely new era. Evidence of Geospatial 4.0 could be seen throughout the trade show, where companies presented a wealth of customer-oriented and vertical solutions.

Intergeo is always an excellent opportunity to observe the latest trends and developments in the geospatial world. A few years ago the focus was on the introduction of mobile mapping systems, but the supplier offering has changed as this market has matured. Nowadays, in addition to advanced systems, many smaller systems have also become available. These often come with a single scanner and fewer cameras. The price point is usually lower, too, but the end product is still of a very high quality because the point density of the sensors has been further developed and improved over time.

Unmanned systems were everywhere at Intergeo 2015, with suppliers presenting different form factors and different operational models. The pace of development is high in the UAV sector thanks to continuous improvements to navigation software and battery life. Most UAVs are already equipped with a camera that is used to create images for orthophotos or point clouds through dense matching technology. Increasingly, vendors are now introducing Lidar-based sensors for UAVs, and several new market entrants have laser scanners dedicated for use in UAVs. As a UAV with a laser scanner is able to get very close to an object and scan it from many different angles, the resulting point cloud datasets are usually outstanding in terms of detail and precision.

Building Information Modelling (BIM) and GIS have existed alongside one another for many years but the gap between them now appears to be closing. Several scanner manufacturers now provide scan-to-BIM solutions, usually based on a terrestrial laser scanning platform. A little robot equipped with a terrestrial laser scanner can further simplify data collection in large buildings. On the software side, vendors are working on tighter integration with BIM standards. Examples include the data conversion software FME, which now supports BIM formats, and Autodesk which is further improving its Revit line of software.

There were a noticeably high number of companies exhibiting GNSS receivers, which is a clear indication of the dynamism in the GNSS industry. The sector is witnessing increasing competition, rapid technical advancements and the maturing of several constellations (e.g. Galileo). There is a shift towards smaller, more compact receivers as the size of the GNSS tracking boards continues to decrease. Meanwhile, in an effort to secure their market position, manufacturers of high-precision GNSS receivers are focusing their innovative efforts on further improving performance to meet the needs of ever-more-demanding professional users for whom low-cost, multi-frequency models are inadequate.

In the three huge halls of Intergeo, the hardware was the most visible sign of the industry’s advancement. But much of the innovation is actually happening behind the countless computer screens that were at the event to display the output of highly advanced software solutions. For example, many companies are developing smart algorithms for processing huge amounts of data, both point clouds and images. Some examples include the automatic extraction of cables and pipelines, trees, facades, etc. In addition, 3D data is increasingly visualised as stunning graphics and often rendered by 3D engines initially developed for gaming purposes.

With its future-oriented focus on themes such as digital construction and smart cities, Intergeo 2016 will be held in the northern-German city of Hamburg – a key centre of trade, architecture and innovation which is famous for its international flair. According to Christoph Hinte, managing director of Hinte which organises Intergeo, plenty of advance bookings for exhibition space have already been placed. In view of so many geospatial technologies being developed so quickly, next year’s trade show and conference in Hamburg is guaranteed to be equally as exciting as the Stuttgart event. Intergeo 2016 will be held from 11 to 13 October.

A Breathtaking Voyage into the Geospatial Realm at Intergeo