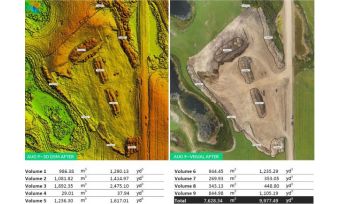 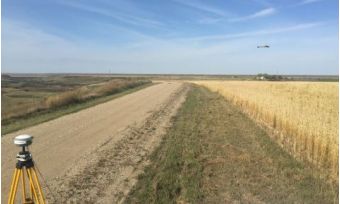 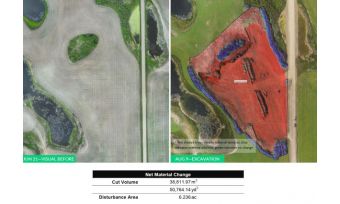 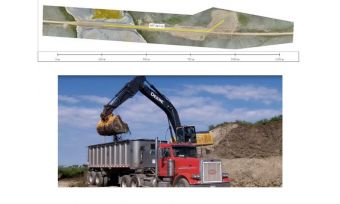 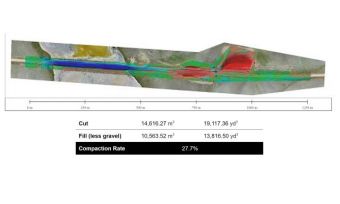 Organisations that contract road-building projects typically compensate construction companies based in part on the excavation and transportation of the soil and the cost of the material. But traditional methods used to acquire this data can prove time-consuming, costly and unreliable. As a result, having an accurate assessment of the amount of soil used and the transported distance is essential in bidding, awarding and compensating a contract.

(This article is brought to you by senseFly)

To understand how to improve this process, Green Aero Tech, in consultation with the Saskatchewan Rural Municipalities of Piapot and Lipton, decided to investigate the efficacy of utilising Unmanned Aerial Vehicles (UAVs) to help facilitate this process.

The aim was to learn how unmanned aerial vehicles (UAVs or 'drones') could help measure and track the amount of soil used in the construction process and glean any additional benefits from using drone technology.

As a result, several important types of information emerged, including the quantity of soil removed from the borrow pits, how to more accurately measure clay and topsoil volumes separately, determining the distance soil is hauled and verifying the compaction rate on the finished project.

For this project, excavation quantities were calculated based on a comparative site analysis of both a borrow pit and linear road. Data was collected using a survey-grade senseFly eBee Plus fixed-wing drone with real-time-kinematics (RTK) capability.

Flights were performed for each area before the project began and upon completion. Flights were conducted at 400 feet (119 metres) with a general sampling distance (GSD) of 2.80 centimetres.

Precise topographical models from both flights were created and then compared to each other on aligned 10cm gridded digital surface models (DSMs) using Global Mapper and displayed with Green Aero Tech’s proprietary software portal. This analysis determined the volumetric difference and showed the quantity of material extracted.

For example, in Project 1 it was determined that 50,764.14 cubic yards of material were removed from the borrow pit.

In some cases, municipalities require differentiation between clay and topsoil volumes because topsoil and clay are often reimbursed at different rates (topsoil needs to be moved twice).

In such instances, the initial site survey remains the same, and the post construction collection is conducted after the extraction is complete but before the topsoil stockpiles are redistributed over the site.

In Project 1 it was determined that the total materials used were ​50,764.14 cubic yards of clay and ​9,977.49 cubic yards of topsoil. With these material totals, the RMs – which served as the customer for this project and who used the data to verify earth volumes and the haul distances of the contractors building the road –were able to determine proper payment.

As a portion of the tender and repayment agreement was based on material hauling, a measurement of how far the trucks travelled would affect payment of the contract. As the UAV-produced maps are ortho-rectified and geospatially accurate, a simple digital measurement can be applied to determine the hauling distance.

In Project 2, an average hauling distance of ​697.663 m was demonstrated based on the hauling midpoint.

To gain this information, an RTK base station was placed on an unknown point using a serial connection to stream RTCM3 corrections to the flight-management software used (senseFly eMotion).

More aggressive principals may choose to tender a road building project based on full or partially compacted soil volume, as opposed to extracted volume. Measuring compacted soil is a simple process that requires a comparison between total cut (borrow pit) and fill (road) volumes.

In Project 2, the total cut volume was ​19,117.36 cubic yards and the fill volume was ​14,316.56 cubic yards. An additional ​500 cubic yards of aggregate were included in this volume, so by calculating the final difference, it was possible to determine a compaction rate of 27.7%.

It was possible to compare the UAV data to soil extraction calculations from the construction contractor. On Project 2, we determined the total borrow pit extraction to be ​19,117.36 cubic yards while the contractor calculated an extraction volume of ​19,293 cubic yards. The two results carried a variance of ​175.64 cubic yards or ​0.9%.

In the above examples, the application of UAV technology yielded tangible benefits.

The UAV data provided both the principal overseeing the project and the executing contractor with a source of reliable and accurate information.

“We were very pleased with the work done by Green Aero Tech and their drones,” said Frank Kosa, administrator of the RM of Lipton. “With the drones, they were able to provide quicker results, and their final calculations of the borrow pits were within cubic metres of what the contractor stated he had moved for the job.”

By using UAVs, Green Aero Tech was able to gather accurate and verifiable data, which helped the RMs avoid inaccurate billing and ensured fair compensation for all parties. As such, it was found that the UAV-derived data provided a layer of accountability that wasn't there before.

Measuring and tracking volumes encourages contractors to honestly report how much soil is being moved. Without a way to easily verify that data, a company could easily increase their haul estimates, and there would be no way for the company that hired them to validate that number.

For example. if the estimate was off by four percent on a 25,000 cubic metre dig, that is a variance of 1,000 yards. At US$5.00 per yard, the total discrepancy could reach US$5,000. And because most of these projects involve several borrow pit sites, that number could increase on projects with a larger scope.

Finally, UAVs provide faster and more extensive data collection. Prior to drone technology, the only way to collect the data needed was to hire a surveying company to come and collect ground data points manually. Not only does this increase the amount of time needed; it also increases costs. Surveyors require more training and certification and therefore bill out at a much higher rate.

With drones, it is possible to collect far more data points than without. Meanwhile, larger, more complex work sites do not require any additional time for data collection. And because drones allow off-site operation and remote collection of the data needed, this removes the physical risk of having to work in an active constriction zone, as well as the danger of climbing material stockpiles.

Effectiveness from the sky

It can be concluded from the project that topographical UAV mapping technology is an effective way to provide accurate and usable data to address issues relating to road resurfacing.

UAV mapping can provide vital information regarding the quantity of soil removed from borrow pits, measuring clay and topsoil volumes separately, determining the distance soil is hauled and verifying the compaction rate on the finished project.

The resulting reports can be used to verify the work completed by the contractor and to determine accurate payment for services rendered, as presented through both pilot projects.

“We were left very impressed with how drone technology was incorporated into the project,” said John Wagner, Reeve of the RM of Piapot. “It’s clear that using drones for projects like this is a modern, reliable and efficient way to do it.”

All UAV data and reports used with permission of the RM of Piapot and RM of Lipton.