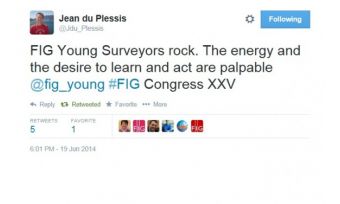 The FIG Young Surveyors Network (YSN) organised its second conference as a ‘Young Surveyor’ stream within the overarching XXV FIG Congress in Kuala Lumpur, Malaysia, in June 2014. It was held at the Impiana Hotel, just five minutes’ walk from the Kuala Lumpur Convention Centre where the Congress took place. More than 200 young surveyors from 46 countries participated – an impressive number, which helped to make this a far-reaching global event.

The atmosphere was dynamic, and the participants constantly shared news, statements and reports – not only inside the venue but also through the YSN social media channels, allowing young surveyors all around the world to join in and interact. The conference offering included speed networking sessions, mentoring programmes, plenary and workshop sessions, professional development and hands-on ‘How To’ sessions. All the FIG bigwigs were invited to present the latest ideas and developments in a highly interactive way. The focus was on discussion and interaction between the speakers and the young surveyors after short, powerful presentations. Reflections were prepared in smaller groups and presented in plenary style.

Young surveyors (YS) around the world are very interested in the future developments and future direction of the profession where surveying is seen as the key issue. The participants were mostly young professionals just starting out in their careers or students about to finish university. The conference therefore offered attendees the possibility to get to know the latest technologies such as laser scanning, UAVs and mobile surveying as well as to build their own professional network. The societal context of the profession also received much attention. There was a multi-disciplinary approach, highlighting the broad contribution of the profession to developments at all levels in society. Visionaries including Jack Makau from Slum Dwellers International, Arnulf Christl, former president of the Open Source Geospatial Foundation, Chryssy Potsiou, incoming FIG president, and Diane Dumashie, incoming FIG vice president, joined the discussion on ‘Surveying the 99%: Engaging the Need’. Leading professionals such as Robin McLaren (KnowEdge), Brent Jones (Esri), Kevin Daugherty (Trimble) and Chris Rizos (IAG) discussed the FIG publication, Fit-for-purpose Land Administration. Those sessions were eye-opening and illustrated to the participants the importance of the surveying profession.

In conclusion, the 2nd Young Surveyors Conference was indeed a huge success and a lot of lessons were learned by the young surveyors present. It provided plenty of opportunities for peer-to-peer engagement (YS to YS and FIG/surveying industry partners to YS as well as YS to FIG member associations) to allow them to exchange, share and discuss current and in-country challenges and opportunities related to young surveyors. It is hoped that such events may continue under the flagship of FIG and FIG YSN with more integrated and seamless programmes between the two to encourage participation by both young and experienced surveyors for the benefit of the surveying profession.

Welcome to the Working (from home) Week