With the boom in the use of consumer-grade cameras on unmanned aerial vehicles (UAVs) for surveying and photogrammetric applications, this article seeks to review a range of different cameras and their critical attributes. Firstly, it establishes the most important considerations when selecting a camera for surveying. Secondly, the authors make a number of recommendations at various price points.

While this list is not exhaustive, it is intended to present a line of reasoning that UAV practitioners should consider when selecting a camera for survey purposes.

Weight is an important consideration for aerial imaging that is often not a limiting factor for terrestrial photography. The growth of newer, higher-spec, low-weight cameras is therefore the focus of this article. In addition, the potential areal coverage of a survey is controlled by flight height, flight duration and UAV velocity – these become more tightly constrained with increased payload.

In order to maximise flexibility in the selection of flight height, duration and velocity, weight must be kept to a minimum. A number of lightweight cameras for UAV use are reviewed below.

Sensor size is one of the key imaging parameters as this, along with focal length of the lens, is the core component in defining the ground sample distance (GSD) – the pixel size in the real world – of a survey configuration. While a full discussion of lenses is beyond the scope of this article, lens selection will have a significant impact on the quality of images and derivative products. For comparison, the effective focal length is presented – this is the actual focal length of the lens multiplied by the scale change of the sensor when compared to a full-frame (36 x 24mm) sensor.

Pixel pitch – the width of each pixel on the sensor – is also noted and is simply the sensor width divided by the number of pixels in a row on the camera sensor. This is intimately linked with the aperture – the size of the opening allowing light through the lens – as it will determine how big an effect diffraction will have on each image. Aperture is usually denoted by the ‘f-number’, the ratio of the focal length to the diameter of the opening. Thus, f/8 is an aperture with a diameter one eighth the size of the focal length of the lens. If the aperture is small (high f-number) or the pixels are small, diffraction effects will convolve the signal as light will fall on multiple pixels and sharpness will degrade.

Thus, while GSD might remain constant for two imaging configurations, one might be diffraction limited and therefore perform significantly worse in practice. To mitigate these effects, a higher pixel pitch is desirable. 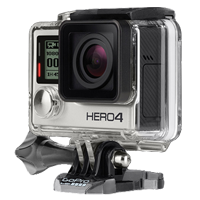 has emerged as a household name over the last few years and its ‘pint-sized’ lightweight cameras have proven very popular – the cameras are renowned for their durability. One of their best features is just how light they are, coming in at well under 100g. Considering many modern aerial photogrammetric surveys can be undertaken using consumer-grade UAVs, the GoPro is an attractive option for those concerned with covering a lot of ground, or surveying in remote areas, as its weight can significantly increase flight time. GoPro has been the camera of choice for many consumer-level UAV manufacturers (e.g. 3D Robotics, www.3dr.com). Further, the extremely popular DJI Phantom series comes with a built-in camera of very similar specifications to the GoPro (albeit with a 20mm effective focal length). However, the trade-offs for these attractive attributes involve the limitations of having such a small sensor, with diffraction effects becoming very apparent when shooting at the highest resolution. This, combined with large lens distortions, can make photogrammetric mission planning tricky. The application of GoPro cameras is limited for scientific purposes. However, they remain a stalwart for hobbyists and can be useful for initial site surveys. 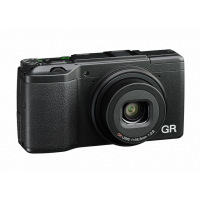 The Ricoh GR2 is a good option for hobbyists looking to undertake higher-quality surveys, and has been successfully integrated into some companies’ UAV packages (e.g. Smart planes, www.smartplanes.se). The low weight, at just over 200g, represents a good trade-off considering the large APS-C sensor. The inbuilt, fixed focal length lens shows good sharpness in benchmark tests (DxOMark, 2016) and its optimal performance at a wide aperture (effective aperture of f/4.5) is noteworthy. It therefore lends itself to application in scenes with low light, as a wide aperture will allow more light incident on the lens without degrading performance due to diffraction. This also simplifies potential diffraction effects, as a wider aperture means the wavefront of incoming light is spread over less of the sensor than at narrower apertures; at f/2.8 there will be no significant diffraction effects. One downside is the fixed lens, since the effective focal length of 28mm potentially does not offer a wide enough field of view for some technical applications. While you can always fly higher, flight height limits and battery limitations will always favour shorter focal lengths (as well as weight of the lens). Therefore, this does not offer the diversity of other cameras in this list, although at its price it represents a very good choice nonetheless. 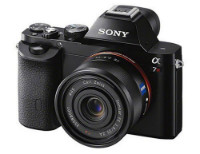 Sony’s A7 series of mirrorless interchangeable lens cameras (MILCs) represent a technological step forward as full-frame sensors become more affordable. The first version is very light, at 417g body only (769g with the 28-70mm f/3.5-5.6 kit lens), and is one of the most compact full-frame cameras on the market. ProDrone (www.prodrone-tech.com) has announced support for a range of compact cameras and MILCs, including both the Ricoh-GR2 and the Sony A7 series. The Sony A7 series camera therefore represents a good starting point for companies/consultants wishing to offer high-quality surveys to clients. The cameras in the A7 series have emerged as a significant competitor to Leica’s M series, which have occupied the space of compact full-frame cameras for many years. This, combined with a wide selection of lenses, means that the camera system is highly versatile. The high-resolution, full-frame sensor and range of lens choices will likely make the weight trade-off worthwhile for long-term studies or those in which field of view is important.

Hasselblad’s medium-format compact MILC represents a step forward in imaging technology. The medium-format sensor offers a field of view no other compact camera can compete with as it stands, and the price – while significantly higher than the other cameras outlined here – will potentially offer value for money for higher-end UAV practitioners. Currently only two lenses are available. However, the extra field of view afforded by the medium-format sensor will likely make up for this lack of choice, with effective focal lengths of 35mm and 70mm. Weighing just over 1kg with a lens attached, this is still practical to put on many low-payload UAVs.

Further to this option, DJI – manufacturer of the Phantom UAV series – has announced a partnership with Hasselblad to offer a package including the Matrice-600 UAV combined with Hasselblad’s A5D medium-format camera using a Ronin-MX mount. While the lens set for the A5D (Hasselblad H-mount) is different than that of the X1D, this bundle offers an ‘out-of-the-box’ medium-format UAV system which may be more convenient for users.

Phase One’s suite of UAV cameras remains at the top end of the market, and the newest iXU 1000 offers an impressive solution for UAV surveying, with a large 100-megapixel sensor in a bigger format than that of the Hasselblad. With three different Rodenstock lenses available (at effective focal lengths of 28, 35 and 50mm), this camera offers everything a UAV surveyor can demand right now. It is the last step before entering the realm of manned missions using solutions such as Microsoft’s large-format UltraCam range, although even then the image specifications are competitive with some of the earlier models (Microsoft, 2008). The Rodenstock lenses show extremely good contrast preservation out to the image edges, particularly at the higher apertures (f/5.6), which justifies their higher cost at around EUR4,000 (Rodenstock, 2016). Phase One also notes the potential for use in combination with Lidar technology. For this data, bigger sensors offer a much more convenient and accurate solution than the generation of large photomosaics as a result of their wide field of view.

The authors have presented a brief overview of what they believe to be sensible choices at various levels of expertise/cost for UAV imaging. This list is not exhaustive and the market is developing very rapidly. Whilst medium-format digital camera development has been dominated by products for traditional commercial photographers, the massive explosion in the use of UAVs has seen far greater interest in camera development by UAV companies, as evidenced by DJI’s investment in Hasselblad and Phase One’s industrial unit. In the coming years there is expected to be a shift towards larger-format sensors in compact forms and suites of lenses capable of integrating with bigger sensors. In addition, one can expect to see data fusion and parallel data capture with other data sources (such as Lidar).

For an overview of UAV cameras see here.
Sources

James O’Connor is a PhD student at Kingston University London, UK, researching how image quality an...

Dr Mike Smith is associate professor at Kingston University London, UK, and course director for the MSc i...

IBKS is a digital solutions and management consulting firm offering built-environment services in the healthcare space. The firm recently tested its innovative NavVis and PointFuse...

Background In December 2019, the municipal government of Kalmar, Sweden, embarked on an EU-funded StreamSam initiative to digitize its community development process. The StreamSam...

A national mapping agency in Europe needed to create a 3D digital twin of its entire country from a collection of geospatial data in varying scales and formats. A primary goal of t...