Sentinel-2A in Orbit: An Overview of the Features of the European Sentinel Family - 02/05/2016 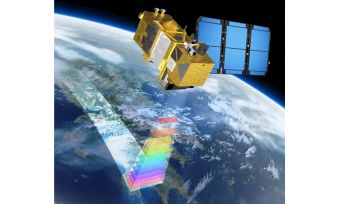 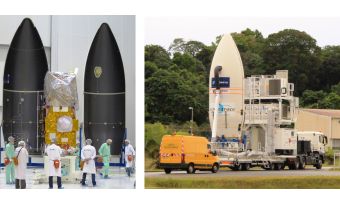 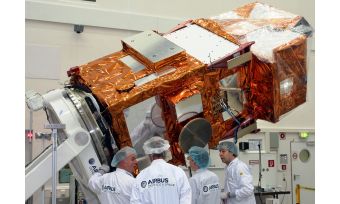 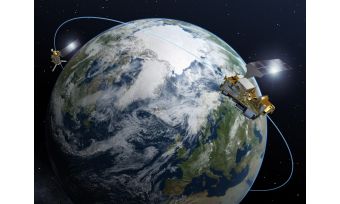 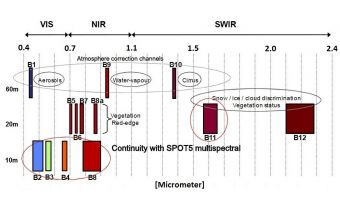 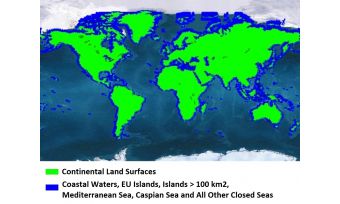 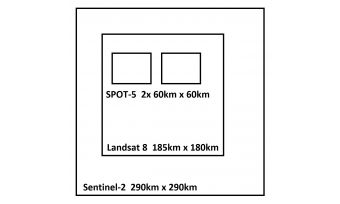 The launch of Sentinel-2A in June 2015 signalled the start of the era of the Sentinel-2 twin constellation. The satellite has been constructed by Airbus Defence and Space for the European Space Agency (ESA). The Sentinels are a new family of missions in progress and a major asset within the European Copernicus programme, which is dedicated to providing a comprehensive picture of the ‘health’ of the Earth. To mark the occasion of the launch, the author provides an overview of the mission, the features of the sensors on board and applications of the images.

Although rarely used in common speech, the English word ‘sentinel’, which is of French and Italian origin, means ‘gatekeeper’. The Sentinel space missions aim to acquire a wealth of geodata needed to safeguard the ‘health’ of our planet.

Once completed, Sentinel will comprise a family of six constellations, each with two Earth observation (EO) satellites, to fulfil revisit and coverage demands. Since the launch of Sentinel-2A, which weighed 1,140kg including fuel, the second Sentinel satellite is now in orbit. Figure 1 illustrates the dimensions of the satellite. The polar-orbiting Sentinel-1A, which was launched on 3 April 2014, carries a C-band synthetic aperture radar (SAR) specially designed for environmental tasks related to both land and the maritime environment. The applications include mapping changes in land cover; monitoring landslides and floods; detecting and tracking oil spills; and monitoring sea ice movements. From interferograms, derived from comparing SAR images of the same area but captured at different times, deformations can be determined with an accuracy of a few millimetres which enables monitoring of earthquakes and volcanic activity. Sentinel-1B, the twin of 1A, was launched on 25 April 2016 and will halve the revisit time from 12 to six days. Sentinel-2B, the twin of 2A, will be launched in mid-2016. Sentinel-3 will carry a radiometer to measure global sea-surface temperatures with an accuracy better than 0.3K. The twins will also have on board a 21-band imaging spectrometer to measure ocean and land colour and a SAR altimeter to measure sea-surface topography.  Launch of the Sentinel-3A spacecraft took place on 16 February 2016.

Sentinel-4 and -5, , will be carried on meteorological satellites operated by Eumetsat and will observe the Earth from a geostationary orbit aimed at monitoring the composition of the atmosphere. The main payload of Sentinel-6, which should be ready for launch in 2020, will be a radar altimeter for high-precision measuring of the topography of the global ocean. The Sentinel family has been specifically developed to support the massive data needs of the Copernicus programme by providing robust EO imagery and derived datasets.

Copernicus was a European mathematician and astronomer who banished the Earth from the centre of the universe by postulating a heliocentric model. He also developed the quantity theory of money. To honour the influential Renaissance man, the European Commission named a comprehensive space programme after him. The European Copernicus programme collects and provides data for monitoring land, sea and atmosphere. The data is captured by EO satellites, in situ sensors, and airborne and sea-borne sensors. The space component, of which the Sentinels form part, is guided by the ESA and the in situ component by the European Environment Agency and the Member States. Services and data are provided free of charge. The Copernicus programme, previously known as Global Monitoring for Environment and Security (GMES), does not only rely on data collected by its own missions since European and international operators contribute data captured by altimetry systems, optical sensors, radiometers, spectrometers and SAR. Copernicus is vital to scientists for studying climate and changes in climate over time. The programme is invaluable to emergency managers for responding to earthquakes, floods, forest fires and other natural disasters, and for monitoring technological accidents or humanitarian crises. It also contributes to security-related issues such as maritime surveillance and border control, and enforces EU policies on, for example, fishing quotas. Practitioners use the data for a wide range of applications including agriculture, fisheries, forestry, health, management of urban areas, regional and local planning, transport and tourism. Copernicus enables central planners to prepare national, European and international legislation on the emission of particulate matter and carbon and on many other environmental issues, and to examine the effectiveness of the execution of the relevant measures.

The two Sentinel-2 satellites have been designed and built by a consortium of companies including the French space agency (CNES) and German Aerospace Center (DLR). The endeavour is led by Airbus Defence and Space. The constellation will consist of two identical polar-orbiting satellites which, once completed, will operate on opposite sides of the same sun-synchronous orbit (inclination 98.5°), 180° apart (Figure 2). This configuration optimises coverage and global revisit times. The single multi-spectral instrument on board, weighing 275kg, is a push-broom imager capturing 13 spectral bands simultaneously with an intensity range of 12 bits (Table 1). The ground sample distance (GSD) of three visible (VIS) and one near-infrared (NIR) band is 10m; for four NIR bands and two shortwave infrared (SWIR) bands the GSD is 20m, while the instrument captures three bands with a GSD of 60m (Figure 3). The latter bands will be mainly deployed for atmospheric corrections and cloud screening: 0.443 micron for aerosol retrieval, 0.945 micron for water vapour retrieval and 1.375 micron for cirrus cloud detection. The reference attitude is 786km, which allows 14.3 rotations per day. The equator will be crossed at 10:30, a time chosen to ensure minimal cloud cover and sufficient solar illumination. It also enables long-term time series to be built in combination with Landsat and SPOT historical data as these satellites also cross the equator at similar points in time.

The two satellites will systematically cover all continental land surfaces between latitudes 56° south and 83° north; all coastal waters up to 20km from the shore; all EU islands and all islands exceeding 100km2 on the rest of the planet; the Mediterranean Sea; and the Caspian Sea and all other enclosed seas (Figure 4). The field of view is 290km and the repeat cycle is 10 days. Once the Sentinel-2 twins are operational, the same spot over the equator will be captured every five days and even more frequently at higher latitudes. The revisit time over the equator can be augmented to three days owing to collaboration between ESA and NASA that allows images of Landsat-8, which was launched on 11 February 2013, to be combined with the Sentinel-2 images. Landsat-8 images have GSDs of 15m, 30m and 100m and capture the panchromatic, multispectral and thermal infrared parts of the EM spectrum. They can be downloaded free of charge within 24 hours of acquisition. The Sentinel-2 twins have a pointing capability of ±20.6° across track, which enables the capture of strips of around 6,400km in length – a beneficial property for emergency response. Table 2 compares features of Sentinel-2A with SPOT and Landsat while Figure 5 shows the differences in area coverage.

Table 2, Comparison of Sentinel-2 with SPOT and Landsat; *) designed for a minimum lifetime of seven years, but the expectation is many more years; **) at the Equator in twin configuration and in cloud-free conditions.

As usual with satellite imagery, products are delivered in diverse stages of post-processing. Scientists may prefer data which is as close to the raw data as possible and they may use own software to keep all the processing steps in their own hands. Level-1B will be most suitable for them; only radiometric corrections have been applied while an enhanced physical geometric model is provided, but the georeferencing itself is left to the user. Level-1B is the first stage available for the public; Level-0 and Level-1A are system products. Practitioners may prefer data in a more advanced stage of processing. For them, Level-1C will be most appropriate. The original data is processed into orthoimagery using a digital elevation model (DEM). The pixel values refer to top-of-atmosphere (TOA) reflectance. The datasets are accompanied by all parameters for transforming the TOA values into Earth surface radiances. The images are resampled to the nominal GSDs of 10m, 20m and 60m and delivered as tiles covering 100 km by 100 km in UTM/WGS84 projection, one tile per spectral band. This level is also complemented by quality indicators on radiometry and image content.

The multispectral images will serve multiple users and a wide range of applications involving land and coastal zones. A non-limitative list includes:

All public, commercial and scientific users all over the world have full and open access to Sentinel data. After registration and acceptance of the terms and conditions, users obtain licences free of charge and gain online access to the data as long as security restrictions do not apply. Additional access and specialised products will be provided through tailored conditions. Sentinel-2A was launched on 23 June 2015. In the meantime, the satellite already has completed hundreds if not thousands of revolutions around the Earth.

Mathias Lemmens gained a PhD degree from Delft University of Technology, The Netherlands, where he presently lectures on geodata acquisition technologies and geodata quality. He has been involved with GIM International since 1997, presently as senior editor. He is an international consultant and is the author of the book Geo-information: Technologies, Applications and the Environment published by Springer in 2011.

Ill 2, After encapsulation in the Vega rocket fairing (left) Sentinel-2A is transported to the launch zone (Courtesy: ESA).

Figure 1, Testing of Sentinel-2A during a six-month programme in Ottobrunn, Germany (Courtesy: ESA).

Figure 2, After completion Sentinel-2A and 2B will operate in the same sun-synchronous orbit 180° apart (Courtesy: ESA).

Accuracy Near, Far, Above or Under – How is FIG Working Week 2020 Contributing

Mapping and Monitoring of Slums in 5 Steps
Latest article