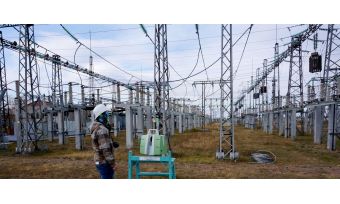 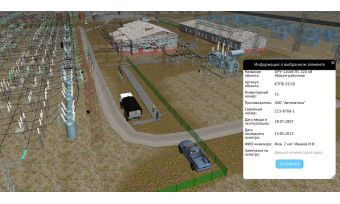 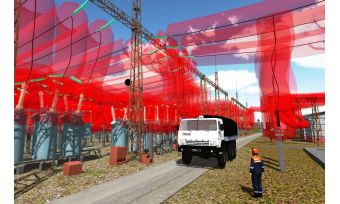 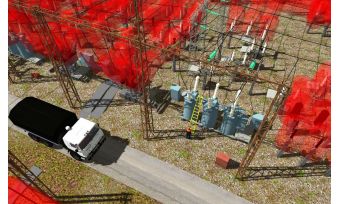 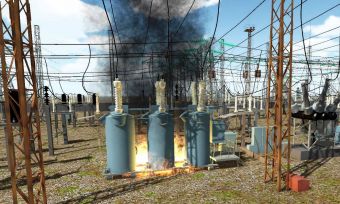 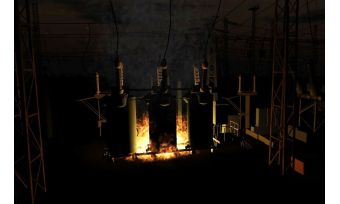 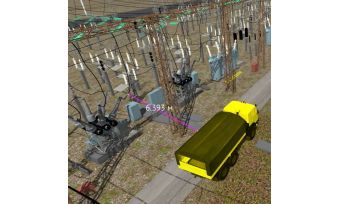 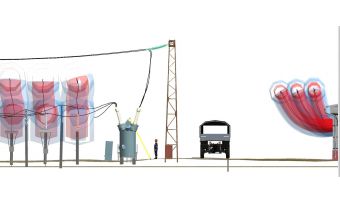 Terrestrial laser scanning has become a standard surveying technique for creating 3D CAD models of industrial objects and for site documentation. However, some facility managers are no longer satisfied with purely static 3D models; they are increasingly demanding animation functionalities to improve maintenance and repair planning and also to guarantee workforce safety. Dynamics can be introduced using game-based tools. In this article, the authors demonstrate the potential of serious gaming for supporting facility management at a power substation in Russia.

The service area of Khakasskoye PMES, a regional branch of the Russian electricity distribution company, includes the Republic of Khakassia and the Tyva Republic, with over 3,300km of power transmission lines and 17 power substations. A 220kV power substation built in 1964 was chosen for the pilot project. This substation covers six hectares and services not only the inhabitants of the cities of Abakan and Chernogorsk but also the Chernogorskiy coal mine and other industrial sites. In June 2014, in the space of two man-days, two hectares of the site were scanned from 37 positions using a Leica P20 (Figure 1). The spacing of the points was a few millimetres resulting in an excessive amount of points. Therefore, the point cloud was thinned before being imported into Leica Cyclone for further processing. A major challenge was posed by the strong electric power fields which could have damaged the scanner, so the field crew were forced to follow strict safety rules.

After the creation of a 3D geometric model from the point cloud, the model was textured. To optimise real-time interactive visualisation, the number of polygons was decreased by merging or simplifying 3D meshes resulting in a dataset of 300MB. Such a modestly sized model allows fast and smooth visualisation even on low-end computers. The simplification did not affect the required accuracy; the global accuracy was 2cm and the local accuracy was better than 1cm. The modelling was done using Blender 3D. This free and open-source software enables the creation of 3D models and interaction with the 3D model, as well as the creation of games, movies and artwork. The code, which was first developed in the mid-1990s, has been freely available since 2002. With 500,000-plus users worldwide already, Blender 3D is in continuous further development. It is likely one of the best freely available software tools for developing complex 3D models and for preparing scenes for 3D game engines. Hot keys make Blender3D faster than many comparable tools.

3D models of vehicles and workers were created for animation purposes, allowing users to move them around the site just as in a game (Figure 2). The 3D model of the site was complemented by the incorporation of electrical danger zones according to current standards and regulations. The size of the danger zone depends not only on the type of the conductor voltage, whereby a higher voltage means a larger zone, but also on the type of objects moving through the scene – danger zones for workers are smaller than for vehicles and machines. The various types of danger zones were modelled and visualised in the scene as semi-transparent tubes around the conductors (Figure 3). Blue indicates danger zones for machines and red for workers.

The game-like environment was created using the Unity3D game engine. First developed in 2005, this game engine is primarily used for developing computer games; it is probably one of the most popular tools in the gaming industry with millions of developers worldwide. The basic functionalities are free of charge. The Pro version used in the pilot entails a licence fee. Applications can run for free on any computer, either as a stand-alone or within a browser. The creation of a stand-alone game-like application with a simple graphical user interface (GUI) took about 30 working days including building the graphical interface from scratch and performing many iterative refinements based on customer wishes. The application was implemented on workstations at the power substation. The Unity3D game engine does not need any support from expensive CAD-like software, the GUI is simple and intuitive, and field engineers do not need to learn to work with complex CAD systems and graphics editors. These are important advantages of gaming software. The model can be visualised in both mono and stereo; the latter significantly increases the immersion and features task-based training and game-based learning.

Three use cases were tested: (1) site familiarisation; (2) training and game-based learning (GBL); and (3) planning of maintenance and repairs. In the first use case, to get acquainted with the site, a user can walk or fly through the 3D model or rotate and zoom in from a fixed viewpoint. At the click of a button, attributive information about the scene pops up (see Figure 2). Machines and workers can be moved from one position to another. When an object passes through the danger zone, an alert is generated by on-screen flashing, tooltip text and/or alarm sounds. An electrical danger zone can be either visualised or made invisible. The latter enables the user to learn how to move safely through the scene without the benefit of additional information. A 3D avatar was used to show the potential of animation.

In the second use case technical service engineers are trained to correctly execute on-site workflows and deal with emergencies, learning how to move through the site safely under various circumstances. For example, a section of the substation switchgear can be switched off for repair, which changes the configuration of danger zones (Figure 4). When a fire emergency occurs, the engineer has to perform actions according to service instructions. The time of day can be set (Figure 5) and extra conditions for the action may also be set, such as that it should be completed within a pre-specified time span for example.

The third use case relates to planning of maintenance and repairs. Distances between objects can be measured in the model and, by moving machines and workers, the user can create the desired configuration. The shortest distance to a high-voltage wire can be tracked while the vehicle moves through the scene (Figure 6). 2D schemes can be created using orthoprojections (Figure 7).

The facility managers involved in the pilot regard the use of this technique in the planning of maintenance and repairs as highly promising. The application can be extended for further training of the personnel and to monitor the site and the locations of employees and vehicles alike in real time..

Mikhail Anikushkin, CEO and founder of Trimetari Consulting LLC, graduated from Penza State University in computer science. He has over ten years of experience in laser scanning for a variety of applications including industrial plants, architecture, underground & topographic surveys and media.

Andrey Buynov is chief specialist of the production assets management department of the PJSC FGC UES branch – Khakasskoye PMES. As a graduate of the Krasnoyarsk Polytechnic Institute and an experienced power engineer, he believes that the use of 3D technology is a viable method to improve the efficiency and safety of equipment.