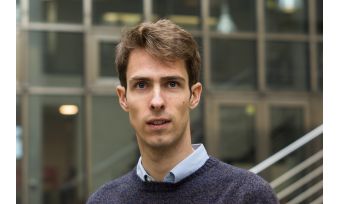 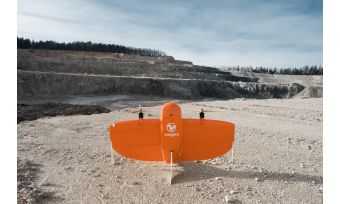 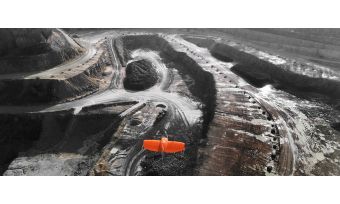 Switzerland-based start-up Wingtra has developed a vertical-take-off-and-landing (VTOL) unmanned aerial vehicle (UAV or ‘drone’) that rises straight up, tilts and flies off like an aeroplane. The WingtraOne is a broad-coverage drone that is used particularly in the surveying, construction and precision agriculture industries and which can capture images in photogrammetric resolution. Offering high-precision mapping in combination with the VTOL and post-processed kinematic (PPK) capabilities, the manufacturer believes it has a strong advantage over the other aerial surveying solutions currently on the market. 'GIM International' decided to talk to Maximilian Boosfeld, co-founder and CEO of Wingtra, to see where the Swiss company is heading.

Wingtra was founded in 2016 as a spin-off of the Autonomous Systems Lab at ETH Zurich. Can you tell us more about the early days?

The story of Wingtra started with an ambitious research project called Pacflyer which Basil Weibel, our current chief revenue officer (CRO), and Sebastian Verling, now senior software engineer, were working on at Prof Dr Roland Siegwart’s Autonomous Systems Lab. The aim of the project was to build a new-generation drone that would overcome the limitations faced by current drone solutions. Basil and Sebastian along with the other two founders of Wingtra – Elias Kleimann and myself – shared an idea of making a global positive impact. Therefore, when the initial research was over, we decided to join forces and make the idea come alive. We wanted our drone to carry the most valuable goods on Earth, and realised that aerial information has the best value-to-weight ratio. This epiphany was the motivation behind assembling the team and creating Wingtra.

How would you describe your company today?

Wingtra has grown to become an international company with distribution partners on every continent (except Antarctica). Our customers have completed more than a thousand flights and the interest in the industry is continuing to increase at a rapid pace. I believe we are very much on track to fulfil our initial goal of delivering high-accuracy data robustly and efficiently. Today, our WingtraOne drone collects thousands of gigabytes of aerial data and is used by mapping professionals in applications that range from surveying and mining to wildlife monitoring.

What distinguishes Wingtra from other UAV companies within the mapping and surveying industry?

WingtraOne is the first VTOL drone to be equipped with professional photogrammetry sensors. I also feel confident enough to say that, currently, we are the largest commercial VTOL player in the surveying, construction and precision agriculture industries. The VTOL advantage is threefold. Firstly, vertical take-off and landing means our users can reach previously ‘unsurveyable’ areas; one of our customers in Australia, for example, operates the WingtraOne from a boat. This helps them pursue their research in wildlife monitoring of a vulnerable sea mammal, the dugong. Secondly, the sensors are always protected – unlike the case of belly landings that fixed wings have to resort to. We can equip our drone with ultra-high-accuracy sensors without the fear of damage, which helps us achieve unprecedented aerial accuracy in the sub-centimetre range. Thirdly, VTOL ensures a completely hands-off experience for our users. They can focus on data acquisition, without having to worry about drone operation.

Strictly speaking, a drone is just a device. Which range of payloads are you offering to mapping and surveying professionals?

WingtraOne is a device enabling what was not possible before, namely photogrammetric resolution with a broad-coverage drone. When it comes to RGB cameras, for surveying professionals looking for ultra high precision, we offer the Sony RX1RII: a full-frame 42MP camera. This payload can also be bundled with our PPK upgrade for ultra-precise mapping (accuracy down to 1cm) without the use of ground control points. For surveyors looking for an entry-level bundle or 3D reconstruction, we offer the Sony QX1 Pro, and Sony QX1 Pro with a 15mm lens, respectively. Besides these RGB cameras, we offer the Micasense Rededge M to professionals looking for an advanced solution for precision farming and plant analysis. FLIR Duo Pro for thermal mapping and monitoring is coming soon. Crucially, the WingtraOne has been designed to be completely modular, so any of the payloads can be swapped for the other in no time!

Can you explain more about the software aspect of the data acquisition?

The WingtraOne drone is operated through the intuitive flight planning app called WingtraPilot. WingtraPilot includes various ways to plan missions, monitor and revise them during the flights and inspect the data output while out in the field. We designed WingtraPilot to maximise successful aerial data acquisition. Before the flight, WingtraPilot runs background checks like battery health, GPS reception and imaging to make sure that everything is in order for the mission. It also guides the operator through the pre-flight process and catches oversights. We like to joke that WingtraPilot is so easy to use that even a child could operate the drone!

Mapping generates a massive amount of data. What about the challenge of processing all the data?

We live in a data-driven society where data storage is becoming cheaper while computational power keeps increasing. Cloud solutions especially are becoming more robust, which makes me think they are likely to become the future of data processing. In the mapping industry, several post-processing solutions already make use of this. Last year we partnered with Pix4D to deliver a full mapping drone combo – a drone to ensure the smoothest data collection and the software which turns the data into actionable insights.

Aerial mapping is not limited to photogrammetry. What are your thoughts on UAV-Lidar mapping, and can we expect any movement in this direction from your side?

Lidar mapping could definitely be an option for the future. However, with the recent launch of the WingtraOne PPK drone, we are keen to focus on our current and prospective users and are keeping our eyes and ears open for all the feedback they have.

What is the secret behind ETH Zurich – and Switzerland in general – in terms of generating so many successful start-ups in the geospatial business?

For one, Switzerland has a long history of innovation in high-precision technology – after all, it’s the land of the watchmakers! Another way to look at it is that the beautiful mountain landscape that makes Switzerland famous has also presented big challenges for the geospatial business. Engineering achievements such as the Gotthard Tunnel are world famous. In fact, WingtraOne itself was used in projects like mapping of the Alpine region for building wind farms and terrace farming locations near Lake Biel where vineyards are cultivated.

The second piece of puzzle in terms of the impact of aerial solutions for geospatial applications comes from the large talent pool concentrated at ETH Zurich and EPFL, both world-famous universities that attract intelligent and passionate engineers from around the globe. ETH Zurich’s history in control and robotics has given rise to many start-ups and innovative organisations, such as PX4 which can be considered the gold standard for open-source software for drones.

Your company recently appointed Cyril Halter – former COO and co-founder of what could be seen as one of your competitors, senseFly – to take over your role as COO. What’s the strategy behind that decision?

Our strategy is the launch of the high-precision drone WingtraOne PPK. The Wingtra team expects it to become the most desired drone in high-precision surveying and mapping applications. Cyril Halter is exactly the person we need to help us reach this goal. He will focus on the industrialisation and the ramp-up of production. His tremendous industry experience will definitely be put to good use at Wingtra.

Zooming in on the future of drones for geospatial applications, how do you think new developments such as artificial intelligence (AI) and machine learning will influence aerial mapping?

We’re already seeing the use of machine learning kicking in for environmental and research applications. Take our customers from Murdoch University in Australia, for example, who are operating WingtraOne from a boat to collect aerial images of a vast area of ocean for their wildlife research project. They are using machine learning algorithms to count sea mammals in the water, monitor their behaviour and ensure better protection of endangered species.

The other implication of machine learning for geospatial applications is likely to be in the field of computer vision. We’re seeing this already in the case of orthomosaic generation (map stitching) software that not just matches individual pictures from the collected dataset, but also corrects camera orientation. This leads to higher accuracy in mapping. Besides this, we can perhaps expect improvements in the arena of dynamic obstacle avoidance using vision, or more robust localisation in the case of GPS loss. However, these improvements are still limited by the low computational power and memory offered by current embedded devices, which need to stay small and lightweight for UAVs.

What are your thoughts on the legislation and regulations for commercial drone use?

I believe that the latest regulatory developments have mainly had a positive effect on our business. Rules are converging and this helps our professional customers to reduce planning uncertainty. Many of the regulations are aimed at respecting the enormous potential of commercial drone use for the economy while still making flying safer. Privacy is the other hot topic in drone regulations, but this applies much more to recreational drones and their operators and is less of an issue in the professional surveying segment.

Which other developments do you expect to have a major influence on UAV mapping in the years ahead?

At Wingtra we strongly believe that the VTOL technology will be the one to disrupt the industry. After all, Wingtra was founded based on high ambitions to overcome those limitations. With ever-more sophisticated VTOL technologies, the gap between fixed wings and multirotors should slowly disappear which will rapidly broaden the application scenarios. Besides that I believe that much more powerful batteries will be developed, breaking the limits of imagination regarding what can be achieved with drones during long missions.

Maximilian Boosfeld is co-founder and CEO of Wingtra, a manufacturer of high-precision VTOL drones that collect survey-grade aerial data. From the very start, Maximilian has helped Wingtra to become an international company with distribution partners across the globe and supplier of the very first VTOL drone to be equipped with professional aerial photography sensors. Prior to Wingtra, Maximilian studied mechanical engineering at ETH Zurich and in parallel ran his very first successful company: the open-air café called ‘Kleine Freiheit’.