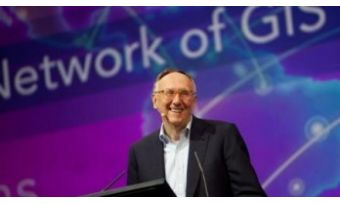 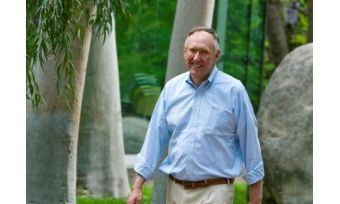 “Staying private and debt-free gives us a level of freedom to do the right thing that we would never have in a heavily-leveraged company or public company,” Jack Dangermond states in this interview. He has been exposed to entrepreneurship from a very early age. “Success requires a sustainable revenue model, that is more money coming in than going out. This sounds simple but you would be surprised how few people understand this when starting a business.” He considers himself lucky to have discovered the world of computational geography and to have developed it into a technology that helps people apply geographic services everywhere.

What motivated you and your wife Laura to start Esri in 1969?

In the late 1960s I went to Harvard to study Landscape Architecture and was exposed to early computer mapping and spatial analysis. I had already been doing geographic analysis manually, but at Harvard they were exploring how to do it with computers. I became interested in the application of the new data technology developed by Carl Steinitz and others at the Harvard Lab, and began using it for several student projects and thinking about how it could be used in environmental planning and spatial decision-making. I moved back to California and started Esri, which focused on the application of that technology to real-world environmental planning projects. That led to the development of software products, and the rest is history.

Entrepreneurship is something I was exposed to from a very early age, so it seemed very natural to start a business that would support my interests. Today that would be called a start-up! Clearly, the business skills I learned from my parents gave me a real-world ‘business school’ education that proved invaluable.

What type of company will Esri evolve into over the next ten years?

GIS continues to grow and evolve, based on advancing technology and user requests. Esri will also continue to grow and evolve in service to our users. Right now, we are adding cloud technology to our offerings of GIS technology. This, together with geoservices and device apps, is making GIS much easier and more pervasive, leveraging the connectivity of the web. It’s embedding GIS almost everywhere, in virtually everything we do. It’s our hope that this will transform how humans see the world and ultimately how they act.

Technology and societal needs are changing rapidly. What are your thoughts on how GIS tools will adapt to those changes?

Esri has a long history of carefully watching what is going on around us and adapting as an organisation. We started out as a consulting firm doing project work, and over time created a product based on what we had learned. Gradually we transformed into a software company. With recent changes in information technology and in our own offerings, we are in the midst of another evolutionary step of leveraging cloud computing and various apps that provide applied geographic knowledge pervasively. One of the things we are particularly focused on is making our technology easier to use and available to more people. This is really the ‘appification’ of GIS. GIS has traditionally been a professional's technology, but now we are seeing knowledge workers who have never touched GIS before accessing it through focused applications that run on mobile devices or in web browsers. Another initiative that’s changing the way we and our customers operate is our increasing focus on sharing data openly. Data used to be a severely limiting factor in many applications of GIS. Now our platform comes with content. Content is not an add-on to the platform; it is integral to the platform and makes the platform come to life. This ready-to-use content is both curated by Esri as well as authored and made available by our users.

Your big data drive may be summarised as the aim to develop computational means for unravelling hidden relationships between geo-related phenomena, not only in space but also in time. How can big data play a role in unveiling such relationships?

Many of our customers are looking at ways to implement big data technology platforms. We are supporting this in a number of ways, including development of new big data tools and partnerships with big data platform companies. What people are discovering is that GIS technology is a natural platform for integrating data from many sources and analysing patterns, trends and relationships, particularly using real-time data. Maps are a way to visualise the story behind your data: seeing spatially enabled big data on a map allows you to answer difficult questions and to ask new ones that you otherwise never would have thought to ask.

Around 50% of Esri’s revenues stem from US federal government agencies. There is a lot of geopolitical turmoil right now. How will the sliding panels affect Esri’s business activities?

The actual amount of Esri’s revenue that comes from US federal government agencies is closer to 20%. However, about 60% of our users are in the public sector, distributed at national, state and local levels and in most countries. It’s not at all surprising that governments are big users of geospatial technologies. They are the regulators of most decisions about geography, and are responsible for managing large areas. Government users are also important creators of data. In fact, the late Dr Roger Tomlinson, the ‘Father of GIS’, created the first computerised geographic information system in the 1960s while working for the Canadian government, trying to get a handle on land use and resource issues across the country. While geopolitical turmoil, along with economic uncertainty, can certainly have an impact on government activities, generally speaking this turmoil has had little effect on the GIS business. Although GIS is certainly not recession-proof, there continues to be a strong interest in applying geographic information to almost every problem. Many of these problems are exactly the kind of problems that GIS is perfectly suited to help solve.

Esri is a California-based company which is little known to the general public, in contrast to Google Maps which is used by billions of people, mostly through their smartphones. Do you have any regrets that you have never evolved into a consumer-facing company?

Google has made a huge contribution by opening the world’s eyes to the power of geospatial visualisation. This has definitely helped us and our users to explain GIS and its benefit to organisations everywhere. The geospatial market is clearly distinguished between the Google-style consumer applications and the professional enterprise market which is supporting geocentric workflows, data management, analytics and decision-making. Through the rapid growth of GIS in the cloud (ArcGIS Online) together with apps on any device, GIS has become much easier and more consumer-facing. This is exposing the full power of our users’ GISs to entirely new audiences.

What is your management philosophy with respect to hiring professionals and bonus compensation?

We focus on hiring really good people who get things done. We pay them fairly, and stay focused on serving our users and developing technology that matters to them.We’ve always been opposed to sales-commission compensation, because we want our staff to genuinely focus on helping our users solve their problems rather than trying to sell something in order to get a commission.

What is your philosophy concerning taking outside investments stemming from stockholders or venture capital?

We have avoided outside investments and believe that has contributed to our stability and long-term success. Being independent has let us focus on what is important for our customers. Our users appreciate this. Today, we spend about 29% of our annual revenues on innovation. That’s considerably more than a ‘normal’ public company spends annually on research & development.

What is your message to young entrepreneurs and start-ups?

Firstly, I would urge them to find something they really like and something that really matters. Often those two things are connected. I was lucky to discover the world of computational geography and developed it into a technology that helps people apply geographic services everywhere. We made a choice from the beginning to not accept outside investment, to operate debt-free, and to stay private. I’m not saying this has been easy, but staying private and debt-free gives us a level of freedom to do the right thing that we would never have in a heavily leveraged company or public company. Secondly, if you wish to be successful, you need a sustainable revenue model for your product or service. Simply stated, that means more money coming in than going out. Don’t say “We’ll figure the revenue model out later,” – later might never come, or it might be too late. This sounds simple but you would be surprised how few people understand this when starting a business.

A landscape architect by training, Jack Dangermond founded Esri in 1969 with a vision that a mapping and analysis framework could provide a deeper understanding of our world and help us design a better future. As founder and president of Esri, Dangermond's leadership and vision stimulate the ongoing innovation of GIS technologies that enable people to make insightful decisions and improve the quality of life everywhere. Dangermond has had a strong impact on the development of GIS methodologies, the GIS software market, GIS technology research and related analytical methods. He has received many awards reflecting the influence of his work, including the British Cartographic Society Medal, the John Wesley Powell Award of the U.S. Geological Survey, the Carl Mannerfelt Gold Medal of the International Cartographic Association, the Patron's Medal of the Royal Geographical Society, and the Alexander Graham Bell Medal of the National Geographic Society.